History of the holiday and recipes to celebrate 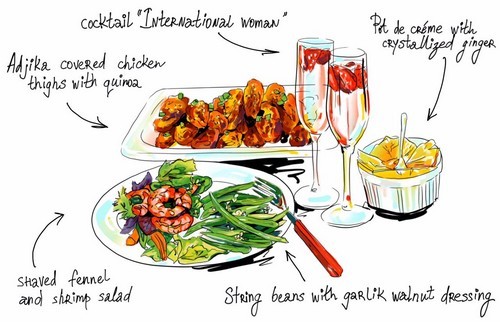 An American friend has invited me to a real live Women’s March on March 8; the kind with placards and earnest hashtags. I was very flattered, and seriously considered going but ultimately had to send my regrets.

“Doing what?” asked my friend, who can be forgiven for wondering if there is anything more pressing than standing up for women and their empowerment.

“Being waited on hand and foot by my husband,” I confessed, feeling not a little chagrined.

“Really?” she asked with just a hint of sarcasm in her voice.

My friend was deeply puzzled.

“It’s a Russian thing,” I said, a phrase, which these days seem to serve as a blanket excuse for almost anything.

Any red-blooded Russian Alpha Male will tell you, they invented International Women’s Day. And like so many things (the radio, the fighter jet, etc.) this is kinda sorta true, but not completely. 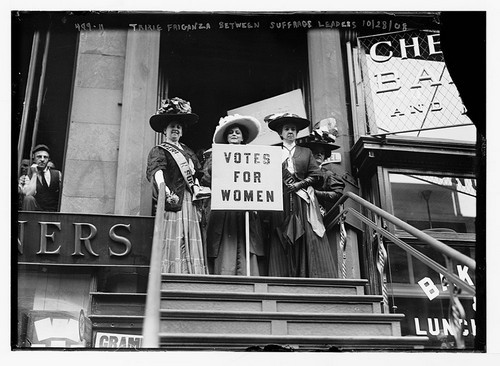 International Women’s Day was first celebrated in the United States in 1909 to honor the 1908 garment workers’ strike in New York City. Championed by the Socialist International, Women’s Day was established as an annual event the following year, though no fixed date was established for the actual day, making it challenging to celebrate globally. But the dogged international women kept plugging away, and the following year on March 19, 1911, the day was marked by protests, demonstrations, and rallies in Austria, Germany, Switzerland, and Denmark. Emphasis then was on women’s right to vote, right to work, to hold public office and calls for an end to economic discrimination on the job.

Russians came to the party in 1913, using International Women’s Day to stage demonstrations not only in support of women’s rights but also in support of the demand for liberal reform in the autocratic Russian Empire. In 1914, calls for peace were added to the general agenda. 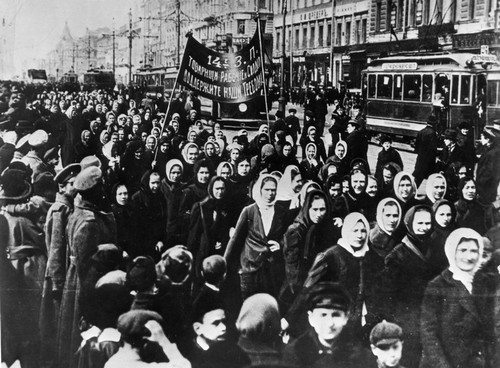 It was 1917, however that really put International Women’s Day and Russia squarely on the map. A thaw in the weather on the last Sunday in February — March 8th by the Gregorian calendar still used in Imperial Russia — brought factory workers out in the streets of Petrograd in droves to support International Women’s Day. Three long years of privation and wartime hardship put “Peace and Bread” at the top of the women’s demands. The demonstration swelled with Petrograd garrison troops joining the marchers, signaling the final loss of control of the Russian capital by the Romanov Tsars in what would come to be known as the “February Revolution.”

From the fiery spirit of those pioneers for equality and justice who ushered in a century of great progress for women’s rights, we somehow have got here. Today in Russia International Women’s Day is all about the big present, the champagne, possibly some naughty lingerie, maybe a weekend to Paris, and, if all of these fail, the classic trope of the clueless Russian man donning his wife’s apron, taking up her pots, pans, and brooms and doing her work on this one day of the year.

Perhaps it was the loss of so many men in World War II that condemned two generations of Soviet women to the multiplicity of roles: bringing home the bacon and having to fry it up for dinner and wash the dishes afterwards. Perhaps it was the Soviet yearning for glamour and romance that permeated the stagnant Brezhnev years, or the conspicuous consumption mania that characterized the post-perestroika era. Maybe it was an insidious conspiracy by Lancome and Tattinger. It’s a mystery, and yet: Here we are.

Or rather, here you are, Alpha Male Russian. I’ll have my feet up while HRH bumbles about the kitchen trying to find things like salt and coffee. Later we’ll go out because I always remind him to make reservations way ahead of time, which you need to do if you have any hope of getting a table anywhere slightly nicer than Teremok.

If you haven’t made reservations, then your best bet is to get in the kitchen and come up with a meal that tells your International Woman just how much you revere and appreciate everything she does for you the other 364 days a year. Makaroni po Flotski — that classic army dish of ground meat on pasta — isn’t going to cut it today. Your average Russian woman today is not only international, she’s also sophisticated. She’s into hot yoga and exotic travel; she drinks green juice while she curates her Instagram (or is that curates the green juice on her Instagram?); and she loves a good artisanal cocktail with muddled fruit or edible flowers. It’s time to get your A game on, Alpha Male.

Don’t worry. We’ve got you covered.

The Signature Cocktail: Start With a Sweet Fizz

International Women’s Day is a sign that spring is definitely on the way! She may be acting a bit coy and hard to get by delaying her arrival a bit, but the bright sprays of mimosa on sale at every metro station tells you that she cannot be far off.

A signature cocktail should reflect that happy meteorological state of affairs. To my way of thinking, there is nothing like the taste of elderflower to herald the arrival of spring, nor the fizz of champagne to indicate we have much to celebrate. This is a sweet cocktail that can be made with either gin or vodka and has enough fresh botanicals and French fizz to get your International Woman in the right frame of mind for the feast to come! 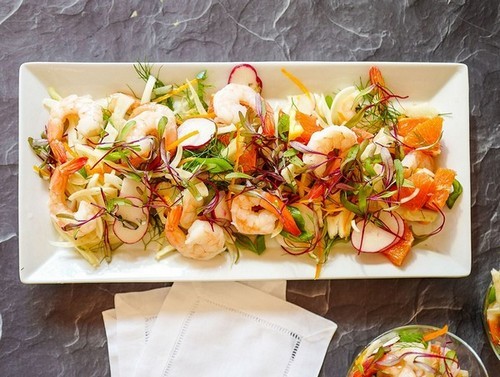 This starter is #Instafab — it tastes as good as it photographs, even with #nofilter.  Fresh ingredients are a must so hit your favorite farmers’ market for some lovely aromatic fennel and crisp radishes.  Feel free to tinker with the ingredients: starfruit would be nice here, as would very thinly sliced baby carrots.  Use a food processor or a mandoline to make the slices as thin as possible, but do watch your fingers! 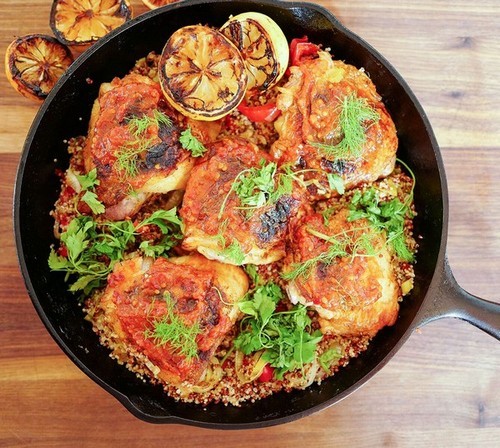 Chances are your International Women loves the flavors of Georgia (I’ve yet to meet anyone who doesn’t).  These chicken thighs, adapted from a midweek “Basically” recipe from the good folks at Bon Appetit, gives you the flavors of that magnificent cuisine without the hassle of foil-wrapped bricks or open flames. I was a little dubious about beginning the thighs in a cold pan when I first tried this, but it renders a ton of delectable golden schmaltz that gets you correspondingly crispy skin.  Presented in an attractive manner, this is sure to both please and impress your International Woman.  Bonus brownie points for using quinoa (pronounced keen-wah.) She didn’t even dream you knew about healthy grains.

You’ll find it in the pantry next to the couscous and the buckwheat.

This simple side dish is another nod down south to Georgia where no serious table is set without a dish of beans. For a quick and easy side dish to compliment the heat of the chicken, here are string beans tossed with dried sour cherries and dressed in a pungent walnut dressing.

Choose thin French-style“haricot verts” if you can find them. 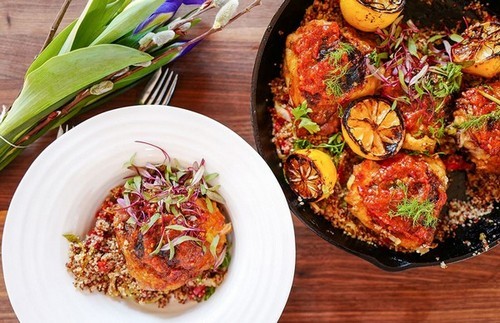 If you’ve got this far, Alpha Male Reader,my congratulations.  I hope you took some pictures! (If you did, tag me on your Instagram, I’d love to see them!)

Your International Woman is already deeply impressed with your signature cocktail, your #instafab salad and your culinary trip to Georgia.  Well done!  You are almost at the finish line, the wind is at your back and you are pretty much unstoppable.

Pot de crème is French for “pot of cream,” a lovely French dessert that is a little too loose to be a custard or a crème brûlée, and so is served in a little pot of its own, making it absolutely adorable.  You’ll need four small ovenproof containers such as a ramekin.  While pots de crème are traditionally made with vanilla, we’re going to make ours with ginger and crushed amaretto cookies, then serve it with a charming medley of fresh berries.  This is an easy one to do ahead and there is nothing scary about it.