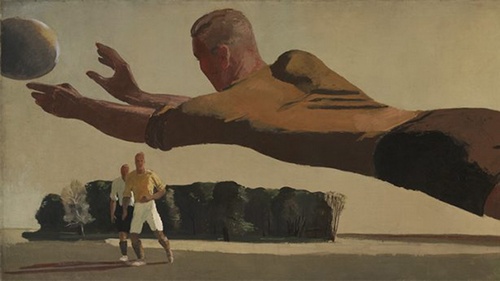 The FIFA World Cup tournament may have ended, but fans can continue to enjoy sports — only in a museum instead of a stadium.

The Moscow Tretyakov Gallery has used the world championship as a kind of benevolent pretext to gather and display sports-themed art from their permanent colllection. For the show Not Only Football, curators pulled works created over the last century from their storerooms or took them from their usual spots on the wall.

Many works were done in the 1920s and 1930s, a time when physical culture and mass sports were promoted in the Soviet Union. Artists found they could express the spirit of their times through sports and the athleticism of individual sportsmen and sportswomen.

As you climb up the museum stairs, you are first struck by “Basketball” by Alexander Deyneka. The artist used an unusual combination of techniques and media, including stained glass, sculptural relief and painting. In the 1950s Soviet female basketball teams were among the best in the world, and after the Soviet team won the World Championship in 1959 and the European Championship in 1960, Deyneka was inspired by the victories. The idea of competition and winning led him to do a series of other works dedicated to sports: graphic compositions and paintings of the 1920s-1930s — including his famous “Goalkeeper” painting of 1934 — and his sculptures of the late 1930s-1950s.

The exhibition features 27 sculptures from the Tretyakov Gallery collection, including the iconic “Girl with an Oar” by Ivan Shadr, “Woman Athlete” by Yanson-Manizer, as well as Elena Yanson-Manizer’s statuettes that embody the ideal of beauty prevalent at the time — the cult of a strong and well-trained body. Works by Joseph Chaikov, another artist who focused on sports, such as “Hockey Players” and “The Pole Vault” are also on display.