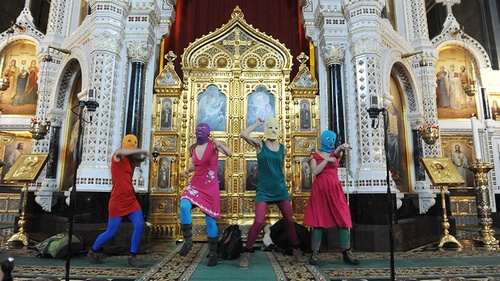 The European Court of Human Rights (ECHR) ruled on Tuesday to award 37,000 euros ($43,500) in damages to members of the anti-Kremlin Pussy Riot punk rock group, who were jailed for two years over a controversial performance in a church.

The high-profile trio was convicted in 2012 on charges of hooliganism for a performance denouncing President Vladimir Putin at Moscow’s Christ the Savior Cathedral, prompting a backlash from activists around the world. The group burst into headlines this week for a pitch invasion protest during the World Cup final at Luzhniki Stadium on Sunday.

On Tuesday, the ECHR said Russia had violated the Pussy Riot members’ rights to liberty, a fair trial and freedom of expression in their 2012 arrest.

“Domestic courts had failed to justify why it had been necessary to convict and sentence the applicants to terms of imprisonment,” ECHR said in a press release.

Separately, the ECHR awarded 20,000 euros of damages to the relatives of murdered journalist Anna Politkovskaya for the Russian state’s failure to conduct “an adequate and prompt investigation” of her 2006 shooting death.