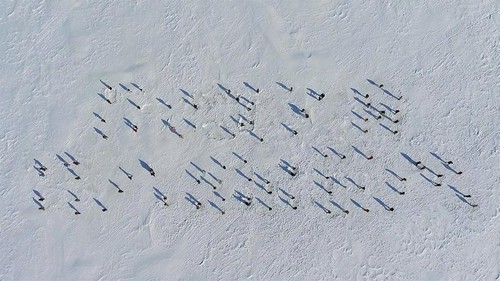 Up to 100 activists waltzed in Russia’s fourth-largest city of Yekaterinburg during elections last Sunday to reassure fellow citizens that there is life beyond the ballot box.

A record 56.2 million Russian voters handed Putin his fourth presidential term on March 18, extending his presidency into 2024 amid diplomatic tensions with Europe and the United States. Election officials declared the vote successful despite recorded incidents of ballot-stuffing and employers pressuring citizens to vote.

A Yekaterinburg-based street artist who goes by the name of “Slava Ptrk”marked Election Day by sharing the video of 50 couples dancing on a frozen pond to composer Georgy Sviridov’s “Snowstorm.”

“At one point the couples stop, the partners take a few steps back and the inscription ‘f-ck it, we’re dancing’ is seen from a bird’s-eye view,” Ptrk wrote in the video’s description.

The artist described the “need to remain optimistic in any situation no matter what’s happening around you” as the project’s goal.

“If you can affect something, then go ahead. If you can’t influence the events, let it go. Disregard it and waltz further,” Ptrk said.