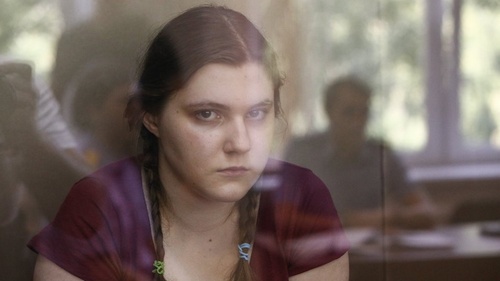 In a bustling McDonald’s in central Moscow, with the smell of fries hanging in the air, a group of young Russians huddled around a table was busy plotting to topple the government.

At least, that’s what prosecutors would later say.

The group, which called itself Novoye Velichiye, or New Greatness, came together at the fast-food chain several times. Mostly, however, they communicated online, through a chat group on the online Telegram messenger.

The most prominent among them is Anna Pavlikova, a veterinary assistant who was just seventeen when she was detained and whose health has quickly deteriorated since her incarceration.

The defendants’ lawyers and activists argue the Novoye Velichiye case bears all the signs of an intricate setup by the security services with the group’s members cast as unknowing participants.

She is a “teenager, a little girl,” Pavlikova’s mother Yulia said outside a Moscow courtroom in late July. “She was lured into something she didn’t understand.”

The Novoye Velichiye chat group was founded in November 2017 by the 19-year-old veterinary student Maria Dubovik. From there, it grew slowly until peaking at 100 members.

Among them were teens like Pavlikova who ostensibly had little experience with political activism. “She was still playing with dolls and had stickers of ponies on her bedroom wall,” her father Dmitry Pavlikov told The Moscow Times.

But the group also attracted less innocuous figures, including Ruslan Kostylenkov, а 25-year-old known in the group by the nickname Center. He was previously associated with a vigilante group called White Owls, with the self-proclaimed aim of “hunting down pedophiles.” He also had a criminal record.

Kostylenkov was quick to position himself as the leader of the group with an authoritarian streak. At one point, he supposedly threatened to kill Pavlikova after she tried to leave.

“It’s possible that Kostylenkov aspired to become a political leader,” Dubovik’s lawyer, Maxim Pashkov, told The Moscow Times. When Kostylenkov declared himself the group’s leader, he said, probably “everyone just went along with it.”

There were also those who sympathized with opposition politician Vyacheslav Maltsev, a fierce critic of Vladimir Putin who fled the country after himself facing extremism charges and mistakenly predicting the beginning of a revolution in November.

But, their lawyers say, the group was not prepared to put words into action. “If no one had got involved, they would have just continued discussing their political views at McDonald’s or through the chat,” says Nikolai Fomin, Pavlikova’s lawyer.

Dubovik’s lawyer, Pashkov, describes the group as “harmless.” In one example meant to demonstrate their amateurism, he described how they had tried to broadcast their own show on social media, emulating prominent opposition leader Alexei Navalny. The plan failed, however, because they could not even afford to buy a camera, he said.

Nonetheless, the group appeared to have attracted the attention of the security services which consequently set out to infiltrate the group.

In November 2017, a certain Ruslan D. joined the chat. Telegram records seen by lawyers and The Moscow Times show he encouraged the group to escalate their activities.

Leaving the McDonald’s behind, Ruslan D. rented an apartment where some of the group’s meetings took place, bought a printer to produce flyers and took over the group’s finances.

He also suggested the group should have a manifesto, which he then volunteered to write. Lawyers have since argued that the language used in the text paved the way for the group to be charged with extremism.

“Without the provocation of the Federal Security Service operative,” says Fomin, “this would have never become a case.”

There are several pieces of evidence the defense cites to support their claim Ruslan D. was working for the federal security services, or FSB.

Court records refer to him as Alexander Konstantinov. But that, too, is a pseudonym, the defense say. Police records of his testimony do not give a place or date of birth, address or other required personal details.

“They only give his first and last name, nothing else,” Pashkov, the lawyer, said.

“It is evident that the FSB has a clear role in this case,” prominent human rights activist Zoya Svetova told The Moscow Times. Such meddling is not uncommon, she added. “It is much easier to fabricate a case than it is to find actual terrorists.”

But with the case against the Novoye Velichiye members largely reliant on the testimonies of four witnesses, lawyers have argued Ruslan D. was only one of several security officials posing as a member of the group.

Others included a member of the National Guard, and two Interior Ministry officials, one of whom held a high rank in the ministry’s counter-extremism branch.

The murkiness around the identities of those who testified against Pavlikova and her peers has sparked confusion and anger among those following the case.

“It’s almost as if for every two members of the group there was one security officer,” said Pashkov. “It’s total overkill.”

It is possible that the authorities’ heavy-handed approach may have been part of an effort to nip unrest in the bud ahead of the World Cup in Russia this summer.

But others argue it is more likely the result of rivalry between different branches of Russia’s security apparatus to showcase their skill at cracking down on extremism and further their own career prospects.

Alexander Verkhovsky, the head of the SOVA Center which tracks extremism, said the case was most likely “a product of initial exaggerated reports from lower officials, after which they and their bosses felt uncomfortable letting it go.”

Nevertheless, Verkhovsky said, this heavy security presence in the group has raised eyebrows even among those familiar with Russian law enforcement. The case is “absolutely abnormal in Russian anti-extremism practices,” he said.

Meanwhile, six members of the Novoye Velichiye group are still being held in pre-trial detention and protests have been held in Yekaterinburg, St. Petersburg and Moscow, joined by prominent public figures.

Pavlikova’s detention in particular has fueled public outrage. Citing a heart condition, the defense has called for her to be put under house arrest.

After medical complications, Pavlikova has instead been transferred to the medical wing of the Matrosskaya Tishina detention center, which is famous for housing, among others, Mikhail Khodorkovsky and Sergei Magnitsky (who died there under suspicious circumstances).

Despite growing public pressure, and even statements in the girls’ defense from government officials, a May 11 court ruling saw Pavlikova’s pre-trial detention extended by four months, until Sept. 13.

“This shows that in Russia there is a clear lack of control by the government and the public over the security services,” Pashkov says, describing the case “idiotic and unjust.”

“The court would rather endanger their lives than take action,” added Fomin, Pavlikova’s lawyer, outside the courthouse. “Their health is worsening, I can see it with my own eyes. Masha Dubovik could go blind.”

Reports in Russian media have since reported Dubovik has also been diagnosed with a tumor and other medical complications.

Meanwhile, Dmitry Pavlikov, Anna’s father, can do little else but defend his daughter’s innocence and sing her praises.

“She loves animals, she’s a very caring person, she’s a studious girl,” he told The Moscow Times outside the courthouse, as a smile appeared on his face. “She listens to the rules, but has never been afraid to stand up for what is right.”

“She’s just a little girl who got dragged into all of this.”