Investors were in a cautious mood, with Brexit concerns hitting the pound and markets unsettled by the latest target for Donald Trump’s sanctions, Russia.

Meanwhile the Russian rouble remains near a two year low at 66.3 to the US dollar.

With some disappointing results from travel group TUI and a host of companies going ex-dividend, the FTSE 100 fell back but the German and French markets managed to edge higher. In the US, markets have lost some of their early shine, with the S&P 500 struggling to reach a new peak. The closing scores in Europe showed:

On Wall Street the Dow Jones Industrial Average is currently down 0.04% or 11 points.

On that note, it’s time to close for the day. Thanks for your comments, and we’ll be back tomorrow.

Talk of a new EU offer on goods has been giving some support to the pound, but that alone may not be good enough, says Joshua Mahony, market analyst at IG:

The pound hit an 11-month low against the dollar, as fears over the future relationship between the UK and the EU persist. There are reports of a potential EU offer that would allow the UK to remain within the single market for goods, while also ending the free-movement of labour. However, with the EU seeking to ensure the UK closely follows the bloc’s environmental, customs, and social rules, we are once again likely to find ourselves at a roadblock.

The truth is that both the EU and the Tory Brexiteers have such differing red lines, any deal which appeased both sides would be unlikely to receive approval from both sides. There is a real chance that we will look back at the snap election as an overriding factor which means that no deal is possible. Given the substantial differences of opinion within parliament, it seems near impossible for Theresa May to garner enough support to pass an agreement that would be satisfactory to the EU.

US markets are in positive territory, with the S&P 500 heading close to a new record.

The Dow Jones Industrial Average is up 0.03% while the Nasdaq Composite rose 0.31%. A rise in technology stocks is helped to prop up the overall market.

As for the pound, which remains fairly stable at the moment, hedge fund manager Crispin Odey believes it has further to fall in the run-up to Brexit.

He told Reuters he was continuing to bet against sterling and said he believed it could fall to as low as $1.21 against the dollar. It is currently at $1.2878.

Back with the UK, and IHS Markit’s chief business economist believes that Friday’s GDP figures will make the recent Bank of England rate rise look even more puzzling:

UK #PMI points to a 0.4% rise in Q2 #GDP tomorrow, but that still makes the Bank of England’s recent rate rise look odd, even with the supposed reduced speed limit for the economy. Prior to the GFC, 56.5 was the all-sector PMI ‘trigger’ for rate hikes. July 2018 PMI was just 53.8 pic.twitter.com/CJ9wj1ESm4

US sanctions put #Russia on edge. Ruble plunges while default probability rises. But US sanctions will not bring Russia to its knees given the country has one of lowest debt levels in the world & nearly half a trillion US dollars in reserves. https://t.co/YQ8ausIid1 via @welt pic.twitter.com/7lYYGdkq87

The US sanctions on Russia will have little effect, reckons Michael Patrick Cullinane, Professor of US History at the University of Roehampton:

Trump is the master of media manipulation, and the decision to sanction Russia over the Skripal assassination attempt comes, not coincidentally, as pressure mounts on the president to react to the widespread condemnation of Russian meddling in the 2016 election. The decision is aimed at domestic American audiences who see Trump as soft on Putin. And he is. After all, the sanctions only cover technology or goods that might be sensitive to national security, a restriction most would have assumed was already in place, and the sanction can be suspended in some instances such as space flight cooperation.

Frankly, the tariffs against China will have a greater impact than this latest round of sanctions on Russia. Moreover, the decision comes as Kentucky Senator Rand Paul visits Moscow. Paul’s meeting with Putin will allow Trump to communicate this uncomfortable decision with some diplomatic cordiality. Needless to say, Trump has not afforded the UK the same exchange. His Twitter account is noticeably quiet; there is no mention of standing with America’s allies in Europe against blatant terrorism. Such a message might not go down well in Moscow.

The Observer did a guide to holiday money which is worth looking at, especially as travellers will want to maximise their spending power as the pound continues to wobble. Here’s the guide:

After a sharp slide, the pound has finally caught a bid today. While it is too early to suggest that a low has been hit, today’s rebound is certainly a welcome relief for the pound bulls. The GBP/USD has ended a run of five consecutive losses, the GBP/JPY is up after falling six days in a row, while the EUR/GBP is back below 0.90 after a sharp 4-day rally. Sterling’s rebound is therefore mainly because of profit-taking on the short trades that had been accumulated over the past week or so.

Clearly some market participants have one eye on upcoming UK data while assessing the damage of a potential no-deal Brexit outcome on the UK economy. The latter is going to be a longer term worry which means any short-term rallies in the pound could be short-lived, as it proved to be the case after the Bank of England’s rate hike last week.

Speaking of the data, we have the latest UK growth figures to contend with on Friday. Razaqzada says:

GDP is expected to have grown in the second quarter by 0.4% following a disappointing expansion of just 0.2% in Q1. The ONS will also publish the monthly GDP estimate at the same time, as well as UK trade figures, manufacturing production, industrial production and construction output. The UK data dump tomorrow morning at 9:30 BST should cause a spike in pound volatility. If the figures are overall weaker than expected then the pound could resume its slide. If the data turn out to be stronger then it will be interesting to see whether the pound bulls will be more determined this time around after the currency’s quick reversal post the Bank of England last week.

Over at the London stock market, shares in holiday firm TUI have slumped by 5% to the bottom of the FTSE 100 leaderboard, although they are off their worst levels.

Obviously a weak pound won’t be good for their sales. But today’s selloff is mainly due to the European heatwave encouraging holidaymakers to stay at home. After all, why spend hard earned cash seeking sun elsewhere when you can frazzle for free in your own back garden.

Our full report on the TUI results is here:

That’s down from 219,000 in the previous seven days, and not far from the 48-year low recorded in July. The US labo(u)r market continues to look remarkable solid…. 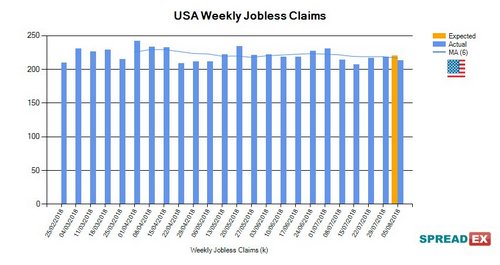 UN Tells Russia to Rein in Torture, Report on Efforts