A terrible war is farther and farther from us, less and less of its eyewitnesses, and its memory is increasingly being used in the interests of today’s politics. To avoid this, it is necessary to tell children about it. So that our younger generation knows: this should never, ever happen again. 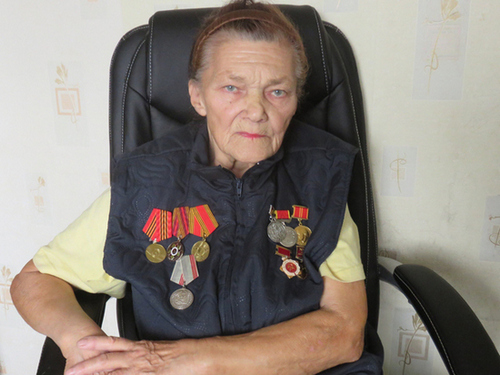 Those families where there are still living veterans are very lucky. In them, children can learn the truth about the war first-hand, from those who know it firsthand.

11-year-old Theodosius Yachmenev about the war, his grandmother told a lot. The boy was so impressed with her story that he wrote about it to us in the newspaper.

“I am half Belarusian, and my second homeland was occupied by the Germans from the first hours of the war. In 1941, my grandmother Inna Semenovna Tyurina was only 8 years old. Her father went underground from the first days and did not appear at home (except for a few secret meetings). Inna and her younger brother Edik were playing with a ball in the yard, when people rode motorcycles on the streets, shouting in an incomprehensible language: “Juda kaput!”.

So for little Inna, the war began – cruel and unpredictable. Throughout Belarus, partisan movements began to be created. My grandmother was a very intelligent girl, so it was she who was assigned to assign notes to the partisans in the forest. Inna was equipped in the forest under the pretext that she was going to gather mushrooms, she left notes in the hollow of the tree. Notes were hidden in a basket, in shoes, in the hair (they were very thick and long). The soldiers guarded the entrance to the forest, adults were not allowed. The Germans and the children suspected, shouting: “Kinder-partisan!”. But the evidence was not found. Once a German soldier beat Inna with his boots, which were covered with iron. One day, Inna’s father secretly came home for winter clothes and food, and whispered to her: “You are being watched, beware!” And then the policemen knocked into the house – they betrayed their father, no one really had time to say goodbye. No one else saw my great-grandfather.

In September 1943, my grandmother, her brother Edik and mother Zina were forcibly taken away to deportation to Germany (as they were told). They took a truck to the station, put it in a cold, boarded wagon of a freight train and took it somewhere. As it turned out, on the border with Poland. We drove for a long time, many days, we were not allowed out of the carriage, there was a terrible, sickening stench. Upon arrival, all Jews were told to go out, but not to take things. Announced that lead them to the bath to wash off the road. All protested: “Why were the Jews the first?” The place where they came was called Auschwitz, or Auschwitz, the death camp.

Grandmother with mom and brother were prepared for the experiments. Constantly took blood. They all the time heard the cries of children who were taken to the “study”. And little Edik asked plaintively: “Mom, why do kids scream so badly?” Zina’s mother clasped Inna and Edik and didn’t know what to say. And by them carried huge, heavy bags, from which constantly oozing blood.

Then one day, after several months in Auschwitz, a German gentleman approached them and grabbed Zina’s mother by the shoulder, dragged her toward the truck. Zina grabbed the children and said: “Do not take me alone, take with the children.” They and many others were put in a car and taken to some other place. In fact, because they were saved from imminent death – they were transferred to a labor camp.

Mom worked in a factory, Inna in the kitchen, Edward in the quarry, mined coal. All lived in wooden huts. Once Edik’s basket was torn with coal, and the warden accused Edik of wanting to steal coal to heat the hut. They came up with a punishment for him – they beat him with iron sticks to a pulp.

One day, Zine, who worked in the factory, drilled holes in the parts, the warden came up and asked: “Why do not you work?” Something happened to her machine. She replied: “My machine does not work.” “Let’s check,” said the warden and ordered to put his hand inside the machine. The German turned on the car, and drilled a hand through her… She fainted, the fascist drew her pistol and wanted to shoot. Suddenly, he was stopped by a German translator, who screamed shrilly: “Zvi Kinder, Zvi Kinder!”. And the warden did not shoot.

Little Inna worked in the kitchen. Once brought cabbage, she cleaned the leaves with creeping white fatty worms in the trash bin. The warden came to check and asked: where are the cabbage leaves? Inna, head down, pointed to the bucket. Then he got all the leaves out of the dustbin. He collected worms in his huge hairy fist, took Inna by hair and forcibly stuffed them into her mouth. After that, she vomited blood, and she stopped eating. Some gave her their piece of bread, because they knew that the girl was dying. Inna melted before my eyes, stopped walking. Still wondering how she died. When the camp was liberated by the French, she could not go outside. A French soldier climbed onto her bed, carefully took it out and carried her into the street. He kept shouting: “Bonjour, Camerd! We won!”.

Only a year later they were able to return to their homeland. Children whose parents died were placed in children’s homes, and for a long, long time they painted instead of bright drawings broken black airplanes, remnants of destroyed houses, schools that burned to the ground… Over time, life went on as usual.

Inna after the war finally went to school, and immediately in the 3rd grade. There were many such overgrowths in the class, everyone came back from where. Inna was the best student – she did not have a single “four”, not to mention the “three” and “two”. Soon, her mother Zinaida Martynovna broke paralysis – the consequences of hard work in a concentration camp. And the sisters took her to Moscow. Edik, as the son of the brave fallen by death on the battlefields of the Great Patriotic War, was admitted to the Suvorov School.

Inna was left alone in Belarus. Her neighbors sheltered her, took her a corner, and there, behind the curtain, she lived. Before the bed was a stool on which the girl was doing her homework. Grandma was proud and did not want to ask anyone for help, she bought some fruits and vegetables on the market, then went to the railway station and sold at the station. The trains at Orsha station stood for half an hour, there was no other food during those hungry years, so the passengers of the trains willingly bought everything. My grandmother told me that the “rooster” on a stick was especially popular.

After graduation, Inna went to Moscow. She enrolled in MIIGAiK, which she graduated with a red diploma. In the future, due to her business qualities, she enjoyed great respect and honor at work. Even then, when she retired, she was often asked for advice.

Once Grandma Inna went to Belarus (we all continue to call our second homeland that way) and went to places of military glory. I found the very tree in the hollow of which I left little notes for the partisans.

On Victory Day, I always congratulate my grandmother, and she tells me stories of war. And then we go for a walk. We often talk about war, we watch war films together. Grandma Inna comments on them and says what was in reality and what was not. I often try on the roles of heroes for myself: could you? I discuss this with my grandmother. She gently strokes my head and says: “God forbid that there be war again!” And there are tears in her eyes… ”

How do Russians live with a tiny salary: “Only buckwheat”