Striker Baghdad Bounedjah stunned Senegal in the opening minutes of the game in Egypt’s capital, Cairo, with a shot which took a deflection off a defender and looped over the Senegalese goalkeeper Alfred Gomis and into the net. 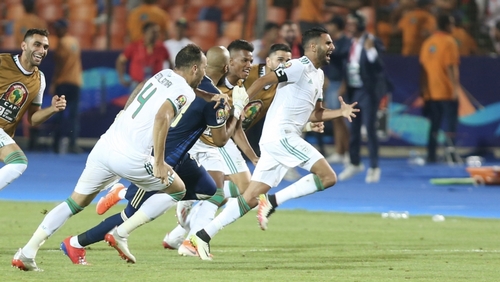 Algeria have been crowned winners of the African Cup of Nations for the second time after beating Senegal 1-0 in the final on Friday.

The goal was timed at 79 seconds – the fastest in an African Cup final for at least 39 years – and delivered Algeria just a second African title and first since 1990.

Algeria sat back after that and the first half turned into a scrappy, bad-tempered affair as Senegal, who have never won the title, failed to threaten their defence.

Senegal were awarded a penalty for handball in the second half but the decision was overturned following a VAR review.

Ismaila Sarr missed Senegal’s best chance by volleying wide from inside the area.

Stoke and Southampton still have reasons for hope as relegation looms, Barry Glendenning