Ronaldo Vieira has become the latest England youth international to move overseas after completing his £6.2m move to Sampdoria.

The 20-year-old was unveiled on Friday by the Serie A side after being given permission to leave Elland Road by Marcelo Bielsa, although he appeared to indicate the transfer was not his choice.

“Sometimes in life things don’t go as you want them. Sometimes things are out of your control,” Vieira wrote in a message posted on Twitter. “But then you have to take these opportunities and give it your everything the same way I have always done. I have nothing but love for Leeds United. I have many great memories, I started my career at Leeds so I would like to thank every coach and member of staff who has been involved in my development, my teammates who have become like family to me and I wish them all the best for the future.”

Born in Guinea Bissau, Vieira moved to England from Portugal in 2011 and joined Leeds in 2016. He made more than 60 league appearances for the club and was part of the England side which won the Toulon youth tournament in the summer for a third successive time.

The Fiver: sign up for our free football email.

Vieira is the fifth English player to sign for the Italian club after Trevor Francis, David Platt, Des Walker and Lee Sharpe and has followed the likes of Borussia Dortmund’s Jadon Sancho and former Arsenal midfielder Marcus McGuane – who joined Barcelona in January – in heading overseas. 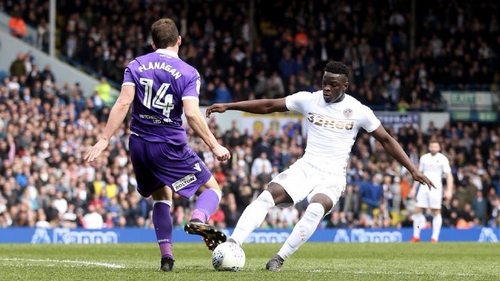