A day at the British Grand Prix that had begun with such great expectation and a celebratory air ended with an unlikely podium place for Lewis Hamilton but it was far from the champagne moment the four-times world champion had imagined.

Indeed Hamilton’s disappointment at his second place to Ferrari’s Sebastian Vettel was writ large and left the British driver questioning Ferrari’s race tactics after any chance of a win disappeared when he was hit by Kimi Räikkönen on the opening lap.

Hamilton had opened the competitive part of the meeting at Silverstone with a superb pole position and was further buoyed by England’s subsequent World Cup win against Sweden. A record crowd of 140,500 had duly arrived at the old airfield in fine spirits, anticipating their weekend would continue in a winning vein. But they and Hamilton were facing heartbreak by the end of lap one. That he managed to contain Vettel’s extension of his championship lead to eight points will have been of cold comfort.

Hamilton made a poor start, being too aggressive as the lights went out and suffering from wheelspin, allowing Vettel and his Mercedes teammate Valtteri Bottas, who finished in fourth, to get past.

Worse was to come. Räikkönen charged after him and, attempting to go up the inside into Village, the Finn locked up and his left front clipped the right rear of Hamilton’s Mercedes, sending the British driver into a spin and to the back of the field.

Hamilton’s recovery drive was as good a comeback as any he has managed but it was not the record-breaking sixth win he had been hoping for and, with a Ferrari hitting a Mercedes for the second time in three races, he was far from happy.

In France Vettel had clipped Bottas in turn one, damaging the Finn’s car for which the German received a five-second penalty. Here Räikkönen was given a 10-second penalty for “causing a collision” at turn three and Hamilton referred to the incidents collectively as “interesting tactics”, noting there had now been two races where Ferraris had “taken out” a Mercedes.

His comments were given short shrift by Vettel and Räikkönen but Hamilton is within his rights to feel aggrieved that the penalties were not commensurate with how costly the incidents proved. But he also admitted the best way to avoid clashes was to ensure a clean getaway from the front of the grid and it was when the lights went out that he suffered the setback that left him battling Räikkönen.

The fans, who had been chanting for their hero through the drivers’ parade, were left silenced and deflated as the scale of the task facing Hamilton became clear. But they were treated to what became a gripping encounter as Ferrari and Mercedes traded attack and defence to a thrilling climax.

Bottas had clung as close as possible to Vettel out front but Hamilton was charging in their wake. The home crowd roared their approval every time Hamilton claimed a place back and they were kept in good voice – he had caught the top six by lap 10 although by then he was a full 27 seconds down on Vettel. 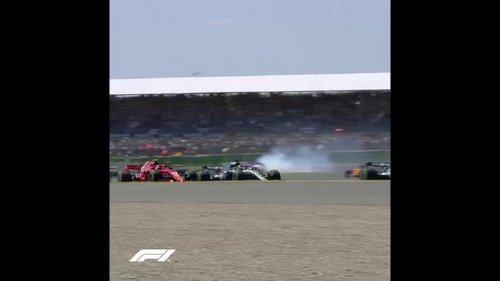 Not the start @LewisHamilton was dreaming of last night… #BritishGP ?? #F1 pic.twitter.com/IstbDgvY1I

Having passed the midfield, the real task was ahead. Hamilton pumped in a sequence of quick laps, staying out long on the soft rubber, and he was the last of the frontrunners to pit on lap 25 taking the medium tyres, emerging behind Räikkönen in sixth, 10 seconds back from the Finn.

On lap 32 Marcus Ericsson crashed his Sauber at Abbey, bringing out the safety car, which allowed Hamilton to close up on the leaders. Ferrari, struggling with tyre wear, immediately pitted both their drivers for fresh rubber but Mercedes kept Hamilton and Bottas out, gaining track position.

When racing resumed after six laps, Bottas led Vettel from Hamilton. It was finely poised but more drama was to follow. The race had barely restarted when Carlos Sainz and Romain Grosjean came together at Copse and the safety car was deployed again. Racing restarted on lap 42 and Vettel immediately charged at Bottas and they went wheel to wheel, the Finn defending brilliantly, as did Hamilton with Räikkönen snapping at his heels.

With the two Mercedes on older rubber, the Ferraris had the edge and the sight of the four of them sweeping line-astern in a mighty battle through Silverstone’s glorious high-speed corners was breathtaking.

It was Vettel, however, who ended on top and deservedly so. He finally retook the lead with a brilliant move up the inside of Bottas at Brooklands on lap 47. With the Finn struggling with a lack of grip on older rubber, Hamilton passed him for second a lap later, with Räikkönen then able to squeeze past for third.

It was a denouement few could have expected and will be long-remembered even if it was not quite the conclusion the home crowd had really wanted.

For Vettel it had been a major result for the Scuderia at a meeting Hamilton and Mercedes have won on the last four occasions. “We have struggled a lot here in the past,” Vettel said. “It was important for us to do well and to make the difference was great.”

For Hamilton, despite the disappointment and his displeasure with Ferrari, he was able to take some satisfaction at minimising the damage. “To get back to second was huge for us,” he said. “I will take it, for us I’m happy with the drive and what the team were able to do.” He went to greet the fans as always but for the first time in five years it was a relatively muted, conciliatory affair after a race the world champion would doubtless sooner forget.