Washington, DC – Counterprotesters outnumbered members of the far-right Proud Boys group and their supporters at a Saturday rally that took place a few blocks from the White House in Washington, DC. Despite a large police presence and a few minor scuffles between the opposing camps, no major outbreaks of violence took place.

Held in the United States capital’s Freedom Plaza, the “Demand Free Speech” rally organised by the Proud Boys brought around 200 people together to denounce what they perceive as anti-conservative bias on the part of major social media companies.

The Proud Boys are a self-described pro-Western, chauvinist “fraternity” who has been classified by the Southern Poverty Law Center as a hate group.

Separated from the far-right rally by heavy metal barricades and police, hundreds of counterprotesters – largely DC residents, in contrast with their far-right counterparts – held a rally of their own in the adjacent Pershing Park.

“I’m a native Washingtonian, and what we’re not going to do is allow the alt-right or the Proud Boys or the right wing to come to our city and amplify hate, bigotry, and racism,” said NeeNee Taylor, the direct action captain for Black Lives Matter DC. “White supremacy is not going to be allowed here in DC. Defending free speech is not killing someone in Charlottesville.”

Organised by All Out DC, an activist collective, the counterprotest response to the far-right rally across the street highlighted the struggles of people with marginalised identities, including immigrants, Native Americanss and trans women of colour with speeches, chants and performances by local artists.

“The people holding the free speech rally were kicked off social media for bigotry,” said counterprotester and All Out DC member Laura Crain. “They are weaponising the concept of free speech and we oppose the hateful, bigoted rhetoric they espouse.” 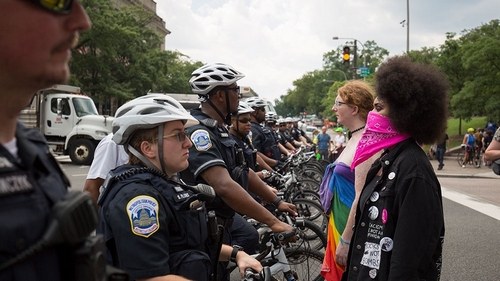 “This is how you shut down Nazis,” said counterprotester and DC resident Rachel Gregory. “They don’t go away when you ignore them. As a white person, I can pass anywhere. That’s why I need to use that privilege,” she said.

On the other side of the barricades, rally attendees listened to speeches from far-right media personalities, who talked about how they have been affected by social media bans and outlined strategies for fighting the left in the US. Although speakers at the Demand Free Speech Rally frequently railed against the “violence” they feared from leftist protesters, the rhetoric they employed often referred to using violence and the need to remain aggressive in the face of left-wing activists.

“The left must be made to fear you…[with] massive brutal retaliation for the slightest of perceived insults,” disgraced writer and former Breitbart News editor Milo Yiannopoulos told an audience of about 200 people.

Asked exactly what kind of speech was unfairly censored online and off, event organiser David Sumrall of Houston, Texas, claimed that Laua Loomer – a far-right provacateur who was banned from Twitter after tweeting Islamophobic falsehoods about US representative Ilhan Omar, a Somali refugee and one of two Muslim women elected to Congress – “lost her voice” for “talking down on sharia law”. 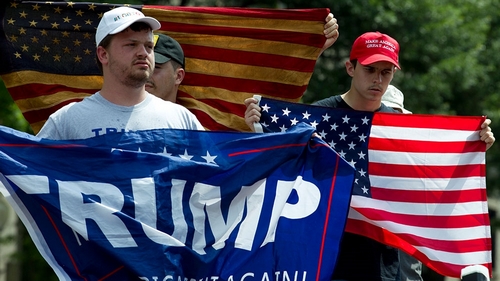 Other right-wing personalities who had been advertised as speakers, including former Trump adviser Roger Stone and Pizzagate conspiracy theorist Mike Cernovich, failed to turn up.

Flamboyant rhetoric aside, only a few minor scuffles took place between rally attendees and counterprotesters, owing in large part to the distance created between the groups by police barricades that made it difficult for either group to hear insults lobbed from one side or another.

The relative peace of the day’s events stood in contrast with some confrontations that took place last weekend in Portland, Oregon.

Earlier in the week, the Proud Boys had been involved in a violent confrontation of their own, when they fought with members of a communist group that was burning American flags in front of the White House on July 4th.

Whatever their affiliation, the one point of agreement between many of the counterprotesters and far-right rally attendees concerned the ideological affinities of the police.

“They really have our backs on this,” said Sumrall. “Police are here to support and protect us.”

“This is not out of the ordinary here in Washington, DC, so we’ll be ready for it,” he said. 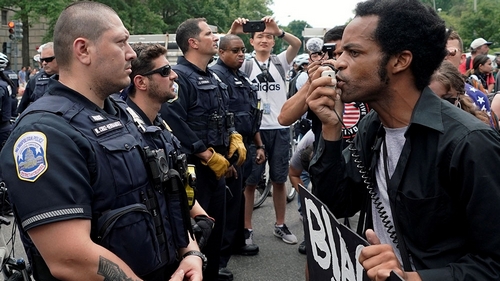 A counterprotester faces off police officers as right-wing activists hold a rally in support of free speech rights in Washington, DC [Bryan Woolston/Reuters]

Video that emerged earlier in the week showing a DC police officer fist-bumping a Proud Boy on the fourth of July after their altercation in front of the White House did little to dispel that impression among attendees of the far-right rally or the counterprotesters.

“Proud Boys are just a sliver,” said Nelson Dolores Lopez, a member of the activist collective La Collectiva as he addressed counterprotesters in Pershing Park. Referring to the police guarding the barricades surrounding the far-right rally, he added: “The other Proud Boys are over there.”