US Secretary of State Mike Pompeo has recognised the “significant advances of Mexican operations” in reducing migrant flows to the United States, Mexico’s foreign ministry has said. 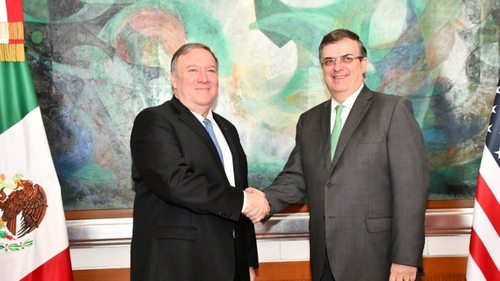 Pompeo on Sunday met Mexican Foreign Minister Marcelo Ebrard in Mexico City to discuss migration and trade amid heightened tensions before a July 22 deadline on a deal that removed tariff threats on Mexican exports.

Under the agreement, Mexico averted punitive tariffs on US-bound Mexican shipments threatened by President Donald Trump by promising to cut the number of migrants travelling from Central America to the US border within 90 days.

“On immigration, Secretary Pompeo recognised the significant progress made by Mexican operatives, in compliance with the agreement between the two countries reached on June 7 in Washington,” Mexico’s foreign ministry said in a statement.

“In our meeting, Ebrard and I reaffirmed our shared democratic values and cultural ties. Mexico is one of our most important partners to increase prosperity and security for our countries and the region,” he said.

The meeting between the two nations’ top diplomats came at the halfway point of the 90-day span as US legislators wrangle over a regional trade deal meant to replace the current North American Free Trade Agreement (NAFTA).

Ebrard said considering the advances Mexico had made, it was not necessary to “initiate any type of negotiation on a safe third country agreement” between Mexico and the US.

The agreement laid out that if the US deems that Mexico has not done enough to thwart migrants, the two countries will begin talks over changing rules to make most asylum seekers apply for refuge in Mexico, not the US.

“Mexico has sent thousands of national guard troops to its northern and southern borders, an increase of about 88 percent over the last 42 days to deal with migrants trying to make their way to the US,” he said.

Pompeo was to travel to El Salvador later on Sunday and meet President Nayib Bukele.

Bukele said last week that his country was trying to reduce irregular migration and fight crime and drug trafficking, and deserves to be considered differently than neighbouring Guatemala and Honduras.

Those three countries make up Central America’s so-called Northern Triangle, the source of most of a wave of migrants and asylum seekers who have sought to make it to the US this year, fleeing violence and poverty back home.

Louisiana braces for first hurricane of the season