Cite Ettadhamen, Tunisia – For most of the past decade Murad Joba, 42, has flitted from one part-time job to another in order to make ends meet.

He is among the estimated 15 percent of Tunisia’s population that is currently unemployed and last held a full-time position in 2010 when toppled leader Zine El Abidine Ben Ali ruled the North African country.

A string of anti-government demonstrations which began late that year and continued into 2011 caused Ben Ali to flee the country, paving the way for years of democracy, as well as political unrest and a flailing economy.

“I worked at a car dealership that belonged to Ben Ali’s son-in-law,” said Joba, sitting at a table inside a coffee shop. “But after the revolution they said people who worked for Ben Ali couldn’t go back.”

This suburb on the northern outskirts of Tunis, where Joba was born and raised, has long been plagued by crime, poverty and drug abuse. The streets, lined with rubbish and uneven pavements, were home to some of the Tunisians who years ago joined the Islamic State of Iraq and the Levant (ISIL or ISIS) in Syria.

But marginalised neighbourhoods like Cite Ettadhamen have become a key political battleground ahead of the country’s presidential runoff on Sunday. In the hope of securing the votes of Tunisia’s poor, candidates Kais Saied, 61, and Nabil Karoui, 56, have offered a vision of employment, education, healthcare and improved infrastructure.

Amid a field of 26 candidates featuring a number of political heavyweights, the two self-styled political outsiders surprised the country by finishing in first and second place in last month’s first round.

Saied, a law professor who has kept a low profile throughout the campaign and who supporters see as embodying anti-elitism, ran without the backing of a party and won 18.4 percent nationally.

Media tycoon Karoui, a populist figure who until Wednesday sat in jail on suspicion of money laundering and tax evasion, took 15.6 percent of the vote. He denies all the charges and says they are politically motivated.

In Ettadhamen, Saied’s humble persona and rejection of the political status quo propelled him to the top, with 21.7 percent of the first-round vote. Karoui, who founded a charity to alleviate poverty and whose Nessma TV channel has promoted his philanthropic activities, trailed in second place at 19.4 percent. Despite his personal wealth, his supporters see him as a liberal champion of Tunisia’s poor.

In the neighbourhood coffee shop, Joba says he has lost faith in politicians and will not vote in the runoff.

“I don’t trust them anymore… I’ve started thinking only about myself,” he said.

Saber Werfelli, a young, lanky, bearded man who owns the cafe, nods in agreement. “Politicians took from us,” he said.

In a country that ranks as the 73rd most corrupt out of 180 states, according to the Economic Research Forum, mistrust of the political elite has become widespread. But while some have turned their backs on politics in response, others have turned to a political newcomer.

“Saied is one of us,” said Kamel, a young barbershop owner. “I feel these elections have more credibility than the other ones, they’re not based on propaganda.”

Kamel, who asked that his full name not be used, has been in charge of his shop for almost two years but business, he lamented, is not going well.

“From Ben Ali until now, no one has made any changes,” he said, standing behind his client, 27-year-old Ashrif, who works in a restaurant.

“I feel like the next president will be one of us, he will be clean,” said Ashrif. “We’ve lost faith in politicians, but Saied explained things in a simple way.” 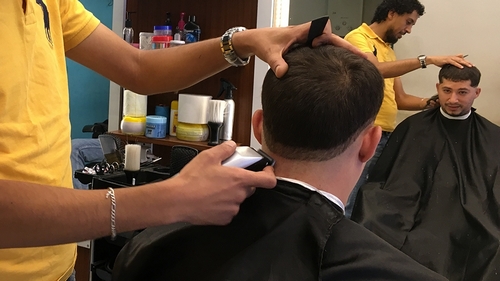 Ashrif gets a haircut at his local barber. Like many Tunisians he says he’s lost faith in politicians, but trusts Kais Saied Sofia Barbarani/Al Jazeera

The country’s economic malaise has affected a wide range of society. According to the Economic Research Forum, 40 percent of Tunisia’s unemployed have university degrees.

Neila Bradai, 39, works as an optician, and unlike much of the population in Ettadhamen, she studied abroad, earning a degree in Brussels.

“There is a general feeling of disillusion,” she said, sitting at her desk in the brightly-lit shop. “Many people didn’t even go to vote.”

She says she is leaning towards voting for Saied, because he is more popular among young people.

“The young people are the future,” she said.

Karoui’s release from jail just days ahead of the vote has the potential to shake things up, according to Sharan Grewal, a visiting fellow at the Brookings Institution who focuses on North Africa.

“It is unlikely that he Karoui and his supporters will accept that they have been given an equal opportunity to campaign,” Grewal told Al Jazeera.

Foreseeing this scenario, and in an attempt to nip such complaints in the bud, Saied has not campaigned while Karoui was in jail. However, said Grewal, it is still possible that Karoui will contest the results if he loses on Sunday – ushering in another period of political uncertainty.

“Not only will the parliament be fractured and the government unstable, but the entire electoral mandate could be questioned as well,” said Grewal. 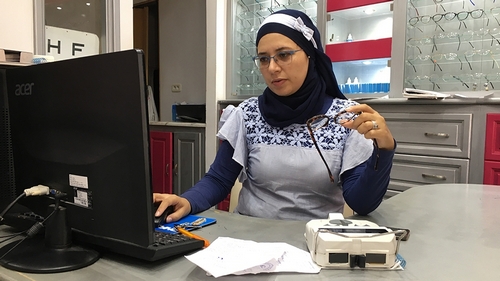 Across the road from Bradai’s opticians, 40-year-old Yosra says she will also vote for Saied. Like many Tunisians, she believes the presidential elections are more important than the parliamentary vote, which produced an inconclusive result last week with no single party winning a majority.

While parliament drafts and votes on legislation, the president’s mandate is limited to foreign affairs, defence and national security. But the language of the 2014 constitution remains relatively vague when it comes to setting out the jurisdiction of the president versus the head of government, the prime minister.

“Given that there is no constitutional court to adjudicate between them, ultimately the distribution in power will be based on the personality of who occupies each position and how far they are willing to go to challenge one another,” said Grewal.

“That said, with the growing nostalgia for a strong, presidential system – a desire that is only likely to grow as the fractured parliament struggles to form a government – it is possible that the presidency will emerge as the stronger of the two executives,” he added.

Ex-Zimbabwe leader Mugabe to be buried at national monument