Sululta, Ethiopia – The rain beats loudly on the metal roof of Amina Yuya’s new home, as her neighbours hastily gather clothes from a washing line and bundle a foam mattress through a doorway to escape the downpour.

Under the glow of a single light bulb, Amina tells the story of her flight from the eastern Ethiopian town of Jijiga, the capital of Ethiopia’s Somali region, almost exactly two years ago.

“They came at night at around 7pm,” she recalls, as the youngest of her seven children squirms on her lap. “There was about 10 or 15 of them. They dragged us from our home and began beating us. They set houses on fire and killed three of my neighbours. I was lucky to escape.”

She does not know what happened to her husband that night but she assumes he, too, was killed.

The 35-year-old mother was one of tens of thousands of ethnic Oromos chased from their homes by armed gangs in eastern Ethiopia two years ago.

During 2017 nearly one million people were displaced following clashes between ethnic Oromos and ethnic Somalis in Ethiopia’s Oromia and Somali regions.

Hundreds were killed, on both sides, mostly by regional security forces.

Amina fled with her children to a camp for internally displaced persons (IDPs), where she stayed for seven months.

Once they brought us here we were crushed morally… we didn’t get what we expected. We are starving, we are suffering, and we are all alone.

She was then taken by bus to the town of Sululta, near the Ethiopian capital Addis Ababa. That’s where she now lives, 650km from her old home town, in a block of corrugated iron sheds with some 30 other families.

“They told us they’d build us a house in Finfinee,” she says, using the Oromo name for the national capital. “But once they brought us here we were crushed morally… we didn’t get what we expected. We are starving, we are suffering, and we are all alone.”

‘I don’t have full hope in the government’

Amina’s story is echoed across Ethiopia, which in the past two years has witnessed an eruption of land, resource and identity-related conflicts resulting in vastly swollen ranks of IDPs.

In 2018, following the appointment of Abiy Ahmed as prime minister and the process of liberalisation he set in motion, nearly three million people were displaced – the highest figure for new displacements recorded anywhere in the world.

The government’s response to the humanitarian crisis was widely criticised, although today it claims there are almost no IDPs left. For several months aid to some camps in the south was blocked, in order to encourage the displaced to return home. In some parts of the country IDPs were forcibly returned, despite fears for their safety.

Oromos like Amina, who said they wished never to return to the Somali region, were promised resettlement within Oromia and in the booming satellite towns which surround Addis Ababa.

Yet two years on, Amina and her neighbours feel they have been abandoned by a government which promised to support them.

She says her view of Abiy, who comes from Oromia and heads the Oromo faction of Ethiopia’s ruling party, is mixed.

“At times it seems good things are happening in the country, but at the same time people are still suffering. So I don’t have full hope in the government.” 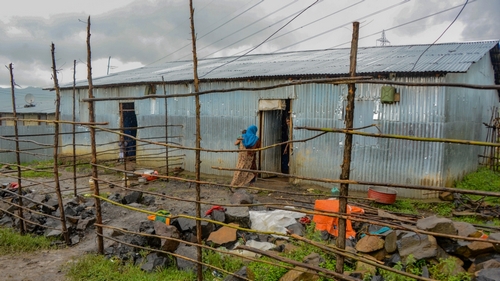 Amina only has two blankets and one mattress in her family’s new home in Sululta. Tom Gardner/Al Jazeera

She rattles off a list of the indignities she and her neighbours have endured since arriving in Sululta. Instead of the house she says was promised she received only basic building materials: iron sheets and wood.

In the single room she shares with her children she has only two blankets and one mattress: “And even that has torn now,” she notes wearily.

Back in Jijiga, where she and her husband moved 14 years ago from a village in the neighbouring region of Haraghe, she had her own restaurant, serving pasta and tea. But in Sululta she has struggled to find employment and – like her neighbours – survives on a small loan of 20,000 birr ($675) from a regional credit association.

The supply of food aid, which was adequate at first, has slowed to a trickle. In the past two months she says they have received nothing at all.

As for school for her children – when she tried to register them she was informed it was full.

We should be able to live and work anywhere. We used to believe any part of Ethiopia was our home.

‘They are leaving us here to suffer’

Amina and her fellow IDPs say they have tried seeking help from the Sululta authorities but have had little luck.

Some of them regularly queue outside the mayor’s office, hoping for an audience.

“When we went to the mayor they just shut the door on us and said she wasn’t available,” she complains. “No one is willing to listen to our problem. I don’t know why they are leaving us here to suffer.”

In the room in which Amina and her neighbours have gathered, a sense of betrayal is evident.

Thirty-two-year-old Abdul Hasif Adem Mohammed is especially vocal, denouncing Abiy and Lemma Megersa, the former president of Oromia, for speaking about reforms and national unity on television but failing to meet with Sululta’s IDPs to address their problems.

“They said they would bring us to Finfinee, but instead they took us to a field for horses,” he says scathingly.

He and Amina both express another commonly held view in Ethiopia today: that the dramatic changes at the top of government have yet to filter down the food chain to local authorities.

Using a nickname for the ethnic Tigrayan faction of the ruling party, which dominated Ethiopian politics for much of the past three decades until Abiy’s rise, Abdul argues that “those in government today are still those who have been working for the ‘Woyane’.”

“There is no change,” he continues. “It is still the ‘Woyane’ system that is ignoring our suffering.” 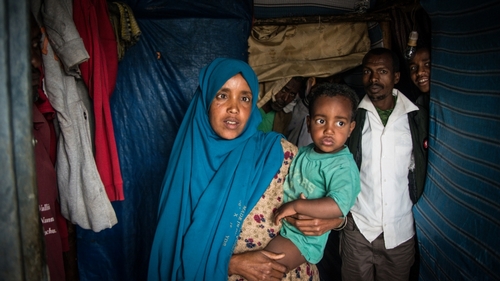 Amina and her neighbours in Sululta have struggled to get help from the local authorities. Tom Gardner/Al Jazeera

Unlike Abdul and most of their neighbours, Amina says she would be ready to return to Jijiga if she could be sure it was safe.

“If Ethiopia is a country for everyone, and if the government is able to maintain the rule of law, then why not go back?” she asks. “There is nothing for us here.”

The need to ensure all Ethiopians enjoy equal rights in all corners of the country, regardless of ethnicity, lies at the heart of the challenges facing Abiy’s administration, especially as it prepares for elections next year.

Amina and the plight of the country’s largely overlooked IDP population serve as a tragic reminder of how far short it has sometimes fallen.

“We should be able to live and work anywhere,” she says. “We used to believe any part of Ethiopia was our home.”

Ex-Zimbabwe leader Mugabe to be buried at national monument