The 43-year-old mechanic’s employer is among many in Zimbabwe mandating shots for their staff, including the government, which is requiring the vaccine for its 500,000 employees. That sets the southern African nation apart from nearly every other on the continent, where the most immediate challenge is still simply acquiring enough doses.

For months, Acholo Jani was told to get a Covid-19 vaccination because it might save his life. He hesitated, fearful of potential side effects. But the moment he was told it would save his job, Jani got in line.

Zimbabwe, by contrast, says it has ample supply for now, mostly purchased from China, but that hesitancy is holding back its campaign — a problem that has also troubled other African countries, partly driven by a general distrust of authorities. But Zimbabwe’s strategy is raising worrying rights questions.

Critics say that, unlike in richer countries that have made use of mandates, Zimbabwe’s rollout isn’t up to the task. Vaccination centres sometimes run out of supply, and poor urban townships and rural areas have often been starved of doses in recent months. 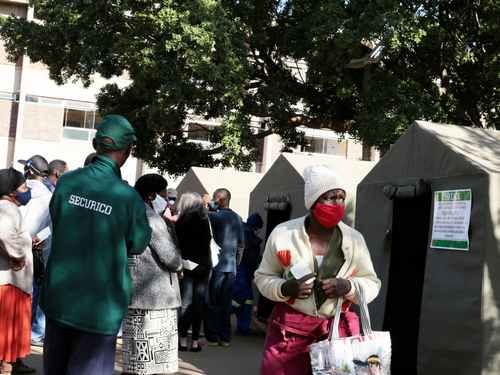 What’s more, they say, it’s cruel to put at risk the livelihoods of people who are some of the world’s most vulnerable and already suffering during the pandemic.

“The Zimbabwe government should first focus on making sure that vaccines are equally available to all people without any obstacles before considering making them mandatory,” said Dewa Mavhinga, southern Africa director for Human Rights Watch.

Mavhinga called for addressing vaccine hesitancy “in a way that builds public trust and confidence in the vaccines without the use of force.”

But the government, known for being authoritarian, appears ready to double down. It already requires vaccines at places of worship and has suggested extending the mandates to public buses — a critical mode of transportation for the country’s poor. Access to informal markets, on which millions rely to buy or sell goods, might also be restricted.

Those measures would effectively make the vaccine a requirement for the vast majority of Zimbabwean adults, even the two-thirds of the working population with informal jobs unlikely to be touched by employer mandates.

At Jani’s workplace, a vaccination card, a pocket-sized booklet with the government’s emblem on the front, is now “your gate pass,” he said.

“There is nowhere to hide,” he said while waiting for his vaccine on a dusty road outside a clinic in the Mufakose township of the capital, Harare.

Jani eventually got his first shot — after joining the line at 5 a.m. and waiting for seven hours — but others are not so lucky.

Some have waited hours on end only to be told the vaccination centre was closing early because of limited supplies or a lack of staff. People eligible for second shots have also complained of being turned away from centres giving preference to those seeking first doses. A new batch of vaccines arrived recently, and lines appear to be shortening.

Around 15 per cent of Zimbabwe’s 15 million people are fully vaccinated — well above the overall African rate of 4 per cent but far from the government’s goal of 60 per cent. The country has so far received 12 million doses, mainly of the Chinese Sinopharm and Sinovac vaccines, which require two shots. Just over 5 million have been administered, according to data compiled by Johns Hopkins University.

Peter Mutasa, the president of Zimbabwe’s largest labour federation, said that the government is mainly at fault for not vaccinating enough people.“Workers have been trying to get vaccinated,” he said.

Mutasa’s organization, the Zimbabwe Congress of Trade Unions, is fighting mandates for workers in court, one of the only organizations in the country to be publicly opposed to them. Other groups appear unwilling to speak out for fear of being labelled anti-vaccination.

Mutasa is not against the shots but said linking them to employment means jobs will be lost “unnecessarily” in a nation where employment is precious after the economy collapsed just over 10 years ago with record levels of inflation and many live a precarious existence. Nearly half Zimbabwe’s population live on less than $1.90 a day.

Mandates will cause “carnage,” he said.

Dr Agnes Mahomva, the chief coordinator of the government’s Covid-19 response, defended mandates, saying they are aimed at “protecting everyone” and arguing they remain voluntary in a way.“If one doesn’t want to be vaccinated, no one is going to come to their house to grab them and vaccinate them,” she said.

But Mutasa noted that workers desperate for a paycheck have “no way to say no”.

Zimbabwe has reported nearly 130,000 virus cases and about 4,600 deaths, according to Johns Hopkins. While those tolls, as elsewhere, are likely to be undercounts, the virus has not weighed particularly heavily in Zimbabwe, a fact that may be contributing to a lack of urgency in getting vaccinated.

Dr Johannes Marisa, the president of Zimbabwe’s Medical and Dental Private Practitioners Association says that as a result mandates are critical.“You have to sort of coerce people if you are to make any headway,” Marisa said. “Human rights are important, but public health takes precedence.”

Marisa believes other African countries will follow suit, as the biggest challenge on the continent moves from acquiring vaccines to getting them into the arms of the hesitant. Given the outcry from African leaders pleading for more vaccine equity at the UN last week — a situation the Namibian president called “vaccine apartheid” — that moment seems a way off.

Even Zimbabwe’s neighbour South Africa, which has by far the continent’s most Covid-19 deaths with more than 87,000 and a more urgent need to vaccinate people, has shied away from any government directives.

Instead, South Africa is moving toward incentives. President Cyril Ramaphosa said the fully vaccinated may soon be allowed to attend sports events and concerts for the first time since the start of the pandemic.

But some private companies have indicated mandates are coming. Health insurance and financial services giant Discovery, which employs over 14,500 workers in South Africa, said it will require all its people to be vaccinated by the start of next year to enter its offices.

While many countries around the world are confronting the debate over mandates, in Zimbabwe the stakes are often higher.

Jani can’t go back to work until he’s fully vaccinated. That means at least a few weeks selling whatever he can on the streets to scratch out a living while he misses out on his usual pay.

“How are you going to survive without a vaccination card in this country?” he asked. He has to find a way.