William Perry Pendley said the agency had adopted out more than 7,000 mustangs and burros captured last year, the most in 15 years and a 54 percent increase from the previous year.

It will take $5bn and 15 years to get an over-population of wild horses under control on federal lands in the west of the United States, the acting head of the US Bureau of Land Management said on Wednesday, adding that several developments had made him more optimistic about his agency’s ability to get the job done.

He said more adoptions would help clear space in government-holding pens, so they can accelerate round-ups while scientists develop new fertility-control drugs to eventually shrink the size of the herds from 88,000 to the 27,000 he says the range can sustain.

He said a new coalition of animal welfare advocates and ranchers is helping promote solutions and Congress appears willing to help.

Pendley said the agency is in the process of hiring additional staff to accelerate round-ups in Nevada, the state with the most horses.

“I’m not going to speculate on what Congress is going to do about money,” Pendley said. “But I know there is a sense of sincerity on the Hill about this issue. They get it.” 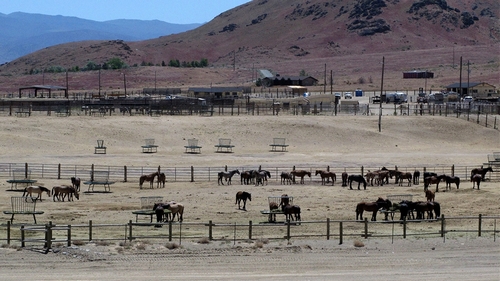 Captured wild horses are kept in holding pens and put up for adoption. Some want the animals to be sold for slaughter. File: Scott Sonner/AP Photo

The Senate Appropriations Committee approved $35m last month for a new package of mustang proposals supported by an unprecedented alliance including the Humane Society of the United States, American Society for the Prevention of Cruelty to Animals, National Cattlemen’s Beef Association and American Farm Bureau Federation.

They say it would eliminate the threat of slaughter for thousands of free-roaming horses and shrink the size of herds primarily through expanded fertility controls on the range and increased roundups in certain areas.

The proposal has been condemned by the largest and oldest mustang protection groups in the west, including the American Wild Horse Campaign and Friends of Animals.

“This proposal, which is really a betrayal by so-called wild horse advocates who are in bed with the meat industry, is management for extinction and putting money toward it is a step toward eradicating these iconic animals from our public lands,” Friends of Animals President Priscilla Feral said in a statement on Wednesday.

In July, then-Acting BLM Director Casey Hammond said the Trump administration would not pursue lethal measures such as euthanasia or selling horses for slaughter.

But critics say the new plan could allow for sterilisation of mares.

They argue the animals must be permitted to roam the range in federally-protected management areas established under the Free-Roaming Horse and Burro Act of 1971. 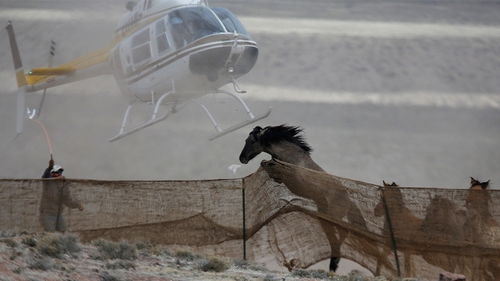 Helicopters are often used to round up wild horses that roam free across parts of the western US. File: Jim Urquhart/Reuters

In the youth Theatre with a tour coming Korean artists

The $35m the Senate committee approved is part of the $35.8bn Interior Department appropriation bill. It’s not clear when the full Senate will consider the measure.

Pendley said the agency is spending $50m a year to house 50,000 captured horses in government corrals and a further $30m in associated costs.

Alan Shepherd, the head of the bureau’s wild horse and burro programme in Nevada, planned to join members of the new coalition at the Nevada Museum of Art in Reno on Wednesday night for the screening of a documentary that blames horses for the severe degradation of federal rangeland.

Doug Busselman, executive director of the Nevada Farm Bureau, said his group still wants Congress to allow the government to sell excess horses without the current ban on their resale for slaughter.

“As long as the numbers are so far above appropriate management levels, the tools of fertility control and adoption don’t accomplish the needs for having wild horse and burro populations match the carrying capacity of the herd-management levels and the destruction of the habitat will continue,” he said in a statement.

Conservationists say more damage is caused by the cattle and sheep that graze on public lands at a ratio of 15-to-1 mustangs.

“This film is a propaganda piece… that scapegoats relatively rare wild horses for problems that in truth are caused by the domestic cattle that are widespread environmental problems across the West,” said Erik Molvar, a wildlife biologist for the Western Watersheds Project. 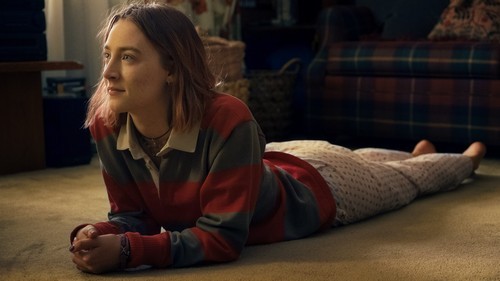 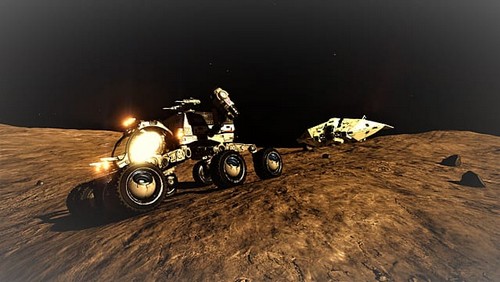 5 Things You Can Do While Exploring In Elite: Dangerous 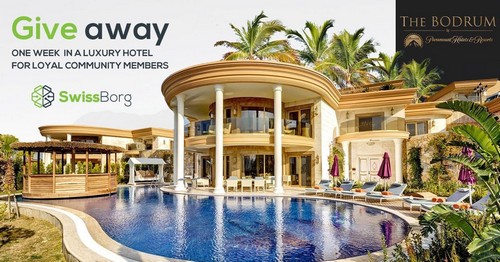 SwissBorg’s Give Away: A Trip To The Moon