Firefighters battled wildfires in California’s wine region on Tuesday as the death toll rose to 15 and thousands were left homeless in neighborhoods reduced to ashes.

“The homes are gone, they are like dust,” said Jack Dixon, a personal trainer who lives in Santa Rosa, a city of 175,000 in Sonoma County. “It is just like we were nuked.”

The remains of a McDonald’s restaurant in Santa Rosa, California

Dixon told AFP that his own neighborhood was spared when the fire “miraculously” changed direction but many others were not so fortunate.

“I am surrounded by devastation and feel lucky it didn’t happen to me,” Dixon said. 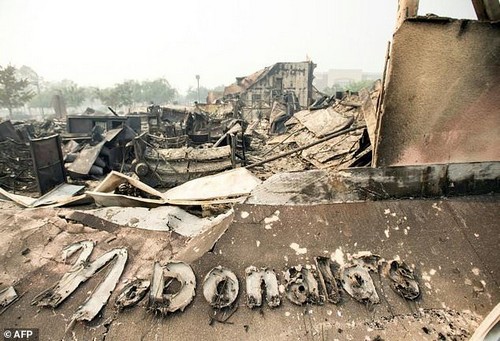 US President Donald Trump declared a major disaster in California, freeing up federal funding and resources to help fight the 17 large wildfires in the western state.

Governor Jerry Brown declared a state of emergency in eight counties – including wine-producing Napa and Sonoma – and said thousands of firefighters had been deployed to fight the blazes. 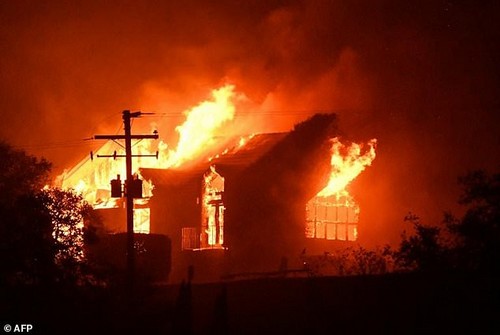 Nine deaths were reported in Sonoma County, three in Mendocino County, two in Napa County and one in Yuba County and the governor said “emergency responders anticipate the number of fatalities could grow.”

Among the dead in Napa were a couple aged 99 and 100 years old who had been married for 75 years, KTVU-TV said. They were unable to evacuate their home in time.

The Sonoma County Sheriff’s Department said on its Facebook page it had received reports of 200 missing people.

Forty-five had been located and the department said it was confident that many of the rest would be found safe.

About 25,000 people have been evacuated in Sonoma County alone, the department said, and 5,000 have sought refuge in shelters.

The fires have torched more than 115,000 acres (46,500 hectares) and destroyed over 2,000 homes and businesses, according to the authorities.

The California Department of Forestry and Fire Protection (Cal Fire) said 17 large fires were continuing to burn on Tuesday. 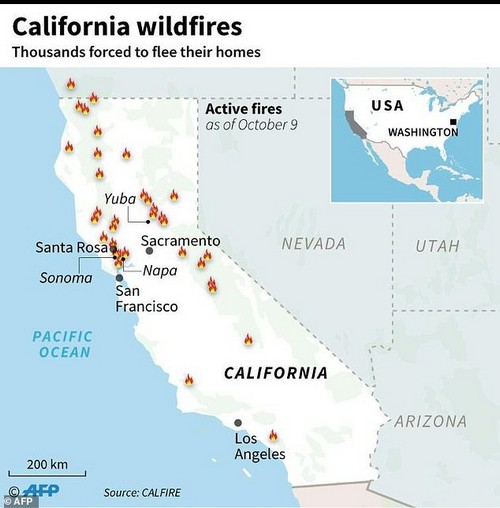 “The winds that fanned these fires Sunday night and Monday morning have decreased significantly, but local winds and dry conditions continue to pose a challenge,” Cal Fire said.

“With the decrease in the winds combined with cooler weather, firefighters made good progress overnight,” it added.

Governor Brown said the “devastation and disruption caused by these fires is extraordinary.

“Thousands have been made homeless.”

Much of the worst damage was in Santa Rosa, the county seat of Sonoma County, and could be seen from US Route 101, the north-south highway which runs from California through Oregon to Washington state.

The Sonoma County Hilton perched on a hill overlooking 101 was a smoldering ruin of charred wood and twisted metal, as was the nearby Fountaingrove Inn.

An enormous K-Mart store was entirely destroyed with only a couple of blackened walls still standing.

Maureen Fairchild, a nurse, was working at a hospital in Marin County where some of the evacuees were brought. 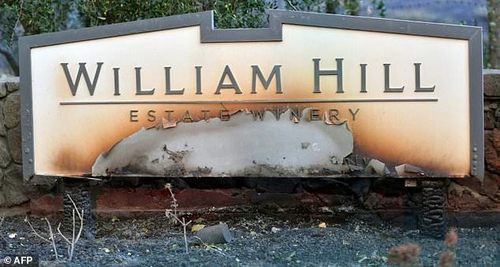 “I was working in a memory-impaired unit,” Fairchild told AFP. “We had all these people who were already confused and now they were in an unfamiliar place with all this frenzy going on around them.”

Kris Hammar, who lives in Santa Rosa on the edge of a mandatory evacuation zone, had not yet evacuated but was monitoring maps, wind direction, and fire updates to see if she and her family should bolt.

“The fire is close, very close,” Hammer said. “Everything is in the car, and we are checking constantly to see if anything has changed.”

Troy Newton, 46, a Sonoma County sheriff’s detective, was among those who fled Santa Rosa. 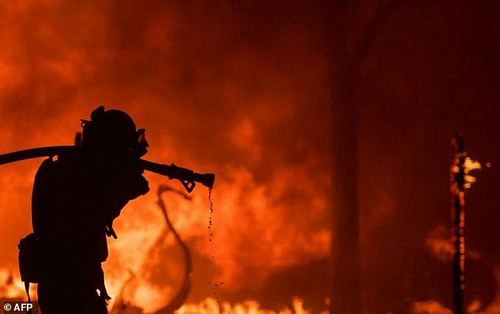 A firefighter pulls a hose in front of a burning house in Napa, California

Newton told The Los Angeles Times he was returning home when he saw a “growing red snake” of fire.

“I ran into my house and told my wife to get our four-year-old boy ready to leave,” Newton said, before raising the alarm for around 40 neighbors.

“It was boom, boom, boom. Ring the door bell. Boom, boom – until someone inside got the message,” he said.

Pacific Gas & Electric said more than 196,000 customers had initially lost electricity although half had had their power restored. 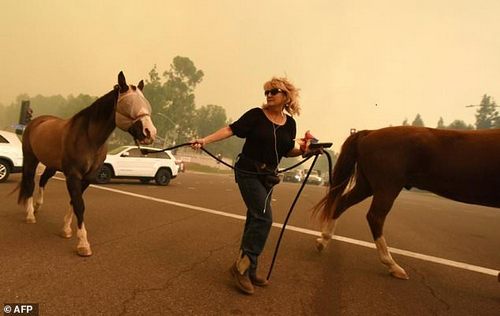 A woman evacuates horses in Orange, California, as smoke from the Canyon 2 fire can be seen in the background

Governor Brown in April declared the official end of the state’s drought that lasted more than five years.

But California is still dealing with the Santa Ana winds, a meteorological phenomenon which brings dry winds down from the high mountains east of the coastal areas – a recipe for perfect wildfire conditions.

Last month, a massive fire described as the biggest in the history of Los Angeles forced hundreds to evacuate their homes.

Why Pre-Planning and Timing is Critical for Seasonal Content