We’ve all heard the phrase ‘sleeping like a baby’, but this little girl has taken its meaning to a whole new level after failing to wake to the sound of a falling tree.

Baby Luna was being taken for a stroll by dad Martyn Finn near their home in Acklam, Middlesbrough when they came across a tree which was about to be cut down.

Knowing his eight-month-old daughter’s notoriously heavy sleeping habits, Mr Finn decided to take the opportunity to test her against the sound of falling timber, capturing the moment on video.

‘I caught it at just the right moment,’ said the 34-year-old dad from Acklam.

‘We live close by in Acklam so I was out walking my dog and baby and I noticed some work was taking place in Acklam Hall’s grounds chopping the huge old trees down, some must be well over 100-years-old.

‘The roads were closed into the estate and a small number of people were gathered to take video and pictures and I managed to get a video of it with my baby asleep in the foreground to see if it could wake her up.

Baby Luna was sleeping peacefully in her stroller when her father came across a tree being felled near their home in Acklam, Middlesbrough

‘She can famously sleep through anything, except the night, and it only stirred her enough to slightly flicker.’

The tree in question was felled by Acklam Hall Ltd following consultation with Middlesbrough Council.

A spokesman for Acklam Hall Ltd said: ‘A full arborist report was carried out on all the trees within the Acklam Hall Estate as part of the ongoing maintenance responsibilities of Acklam Hall Management Ltd.

Father Martyn Finn decided to film the moment to see if his daughter, a very heavy sleeper, would waken to the sound. Footage shows the baby stir but remain asleep 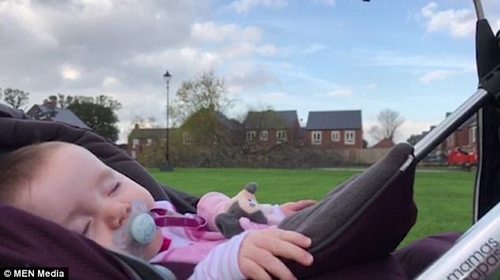 As the tree hits the ground, the eight-month-old continues to sleep soundly, none the wiser

‘The report highlighted the poor condition of the Beech tree and recommended removal before its condition deteriorated any further.

‘The local authority was consulted fully and we received confirmation of their agreement to the recommendations to remove the tree prior to any works commencing.’

The statement continued: ‘Our primary concern is to safeguard the general public and it was deemed that the tree was a significant hazard.

‘There is no doubt that the removal of the tree is a sad event and we are in discussions with the local authority about an appropriate replacement.’

Sarah Jessica Parker and Irina Shayk show off their bras