Skip to content
22.10.2020
Articles
Kelvin Hopkins, the independent MP (because he is suspended from Labour), goes next.

Q: If the EU does not comply with the agreement, will the UK stop paying the £40bn?

Raab says he is confident the UK will get a good deal. He will not go into a deal-making process “expecting one side to welch”.

Kinnock repeats his points about Barnier saying the Chequers deal was “dead in the water”.

Raab asks Kinnock if that is what Barnier said, or if that is Kinnock’s summary.

Kinnock says Barnier was speaking in French. He says the transcript will be published in due course. He says he thinks he heard Barnier say something like: “Les propositions sont mortes.”

Raab says some of the concern raised by the EU reflects their worry that the UK could have a competitive advantage after Brexit. That should give MPs confidence, he says.

Labour’s Stephen Kinnock goes next. Kinnock also sits on the Commons Brexit committee, and he said that when that committee met Michel Barnier, the EU’s chief Brexit negotiator, in Brussels on Monday, Barnier made it “crystal clear” that the Chequers plan was unacceptable. What is plan B?

Raab says in an negotiation of course one side wants to push back against what it’s offered.

He says MPs should not let themselves be used by the other side.

Robbins says Barnier says the EU is opposed to allowing the UK to collect tariffs on its behalf. Yet it does accept this in its plan for the Northern Irish backstop. He says the UK is trying to tease out why the EU finds this objectionable.

Barnier also claims that you cannot distinguish between goods and services because services make up a large part of the value of goods now.

He says services can be regulated separately. If a vehicle comes with a maintenance package, a buyer could choose not to accept that package.

The other point is that service expertise contributes to the value of new goods. But Robbins says this factor has not stopped the EU reaching trade deals, like the one with Canada, focusing on goods.

According to Bloomberg, the UK and Germany have both dropped their demand that the Brexit withdrawal agreement must contain a detailed plan for the future trade relationship. In other words, they are more included to accept a fudge – or a “blind Brexit”, as some call it. Bloomberg says the pound rose in value when this was reported.

Here is an excerpt from the Bloomberg story.

Germany is ready to accept a less detailed agreement on the U.K.’s future economic and trade ties with the EU in a bid to get a Brexit deal done, according to people speaking on condition of anonymity because the discussions are private. The U.K. side is also willing to settle for a vaguer statement of intent on the future relationship, postponing some decisions until after Brexit day, according to an official who declined to be named…

Initially, both sides wanted a detailed outline of what the future relationship would look like as part of the first stage. Negotiators in the U.K. and EU were once planning a document of up to 100 pages; now it could be just a 10th of that, officials say.

Raab says that, if the UK was not bound by a common rulebook for goods, it would have more flexibility to offer concessions to other countries in trade deals.

Q: Do you expect the full future relationship to be agreed by next March?

Raab says he expects heads of agreement to be agreed by March. But he says he hopes it will look like an instruction to negotiators. It should very clear about the choices being made.

He says MPs would not be happy about signing up to a withdrawal agreement if it is “nebulous and unclear” about the final destination.

He says he wants this in place by the time of the EU summit in October. But there may be a “modicum of leeway”, he says.

The SNP’s Philippa Whitford asks about the amendment passed in the Commons saying the UK cannot collect tariffs on behalf of the EU unless that is reciprocated.

Raab says the government is confident the white paper plans are consistent with the amendment.

He says there is a difference between tariffs being paid up front and remittances being paid at a later stage.

Q: But clause 54 in the customs bill will make it unlawful.

Raab says the government has looked at this carefully and taken legal advice. He says the white paper plans would be lawful under the amendment.

Raab says the implementation period, at 21 months, will be “much shorter” than many people feared.

He says the UK could not agree to remain in a backstop situation for a “limbo period”.

Here is the Economist’s Brexit editor John Peet on the hearing so far.

By focusing on history this afternoon’s scrutiny committee show reveals today’s Brexiteer narrative: all would have been well had HMG not given in so easily and so early to EU demands. So it’s May’s fault not the Brexiteers’

Briefing journalists after the Salisbury statement, Jeremy Corbyn’s official spokesman gave a robust defence of the Labour leader’s approach in March, when the PM first attributed the attack to Russia, and some Labour MPs condemned their leader’s response as lacklustre.

“Jeremy took a proportionate, evidence-based approach to what took place, which was the right approach, and it’s been a step-by-step approach ever since,” he said.

Corbyn received a briefing from the security forces on Wednesday morning, and his spokesman said it had now become clear that the Russian state was directly involved in the attack.

He pointed to Corbyn’s remarks in the House that Labour would support “reasonable and effective action,” against Russia, adding that the most effective approach would be, “financial action against the use of London by the oligarchs linked to the Russian state”.

Asked about remarks six months ago comparing the Salisbury situation to the claims about weapons of mass destruction (WMD) made in the run-up to the Iraq war, the spokesman said Labour’s point then had been “as much about the political use of the intelligence, as the intelligence itself”.

Robbins says he has had very difficult conversations with Irish officials where he has said that what the EU put forward on the Irish border backstop earlier this year took very little account of the realities of British politics. 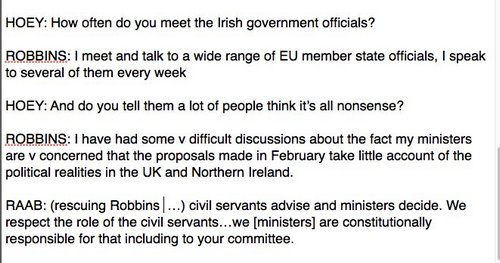 HOEY trying to put Robbins on the rack, but he is rescued by Raab. pic.twitter.com/qooMARJcw8

Q: [To Raab] Do you understand why so many people are surprised the Irish border is such a big issue, given the fact that a border between the Republic and Northern Ireland operates already? Do you agree some people are using this to make Brexit seem as difficult as possible?

Raab says there are different views as to how intractable this issue is. He says he sees it as genuine issue that needs to be resolved. But he says he thinks some in the EU are using this as a “pressure point”.

She asks Robbins if he has visited Northern Ireland in his capacity as Brexit adviser. He says he has been to Dublin but not to Belfast.

Tory MP Richard Drax tells Dominic Raab and Olly Robbins that Northern Ireland border issue is overblown.
Drax: “The Northern Ireland issue has been blown out of all proportion. This is being used sadly, in part, to make the withdrawal difficult” 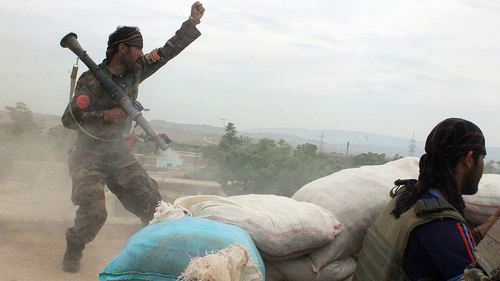 Architecture: the American built a house out of plastic bottles, but the yard is not distinguished from the brick