The 27-year-old shared the happy news on Instagram on Sunday, uploading a short video with her husband, Adam Dirks, and their two-year-old son Tobias, who helped them to deliver the happy news.

American surfer Bethany Hamilton, who famously lost her arm in a shark attack as a teenager, has announced that she is pregnant with her second child.

‘More than thankful to share our joyous news!’ the Hawaii-born surfer captioned the cute clip. 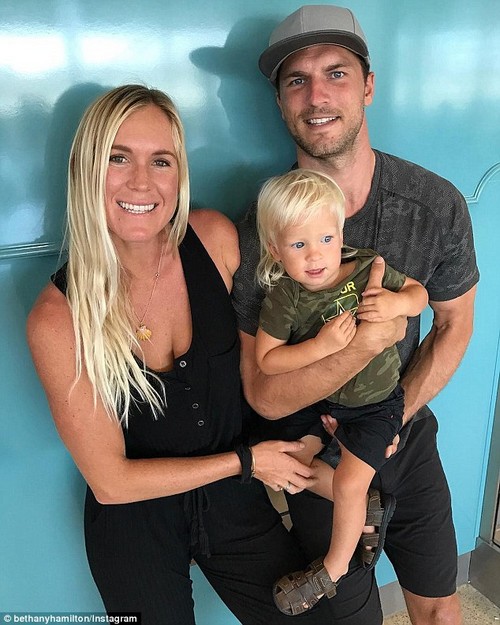 Another on the way! Pro surfer Bethany Hamilton has announced on Instagram that she is pregnant with her second child 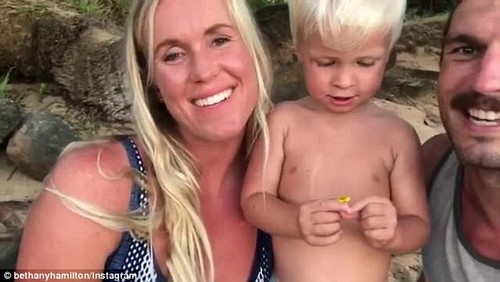 Number two: The 27-year-old and her husband Adam Dirks shared a video with their two-year-old son Tobias in which they revealed the news 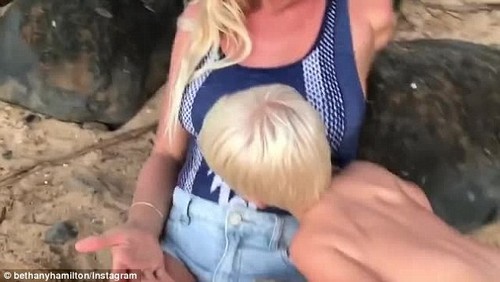 Baby in there: Adam told Tobias to kiss the baby, and he kissed his mom’s stomach

In the video, the couple’s blonde little boy smiles at the camera as his dad asks him, ‘Where’s baby?’

The little boy then rushes over and kisses Bethany’s belly before giving her a hug.

‘Another one on the way!’ Adam says, before Bethany smiles and adds: ‘Baby in there!’

Tobias kisses his mom’s belly a couple more times as Adam muses that he will be a good big brother.

The couple did not reveal the baby’s due date, and Bethany’s stomach still looks quite flat in the video, and in other recent photos she’s posted.

And she’s certainly not so far along that she is unable to travel, in fact she and her family appear to be on vacation in Europe at the moment, and she shared a few pictures from her travels in Paris this week. 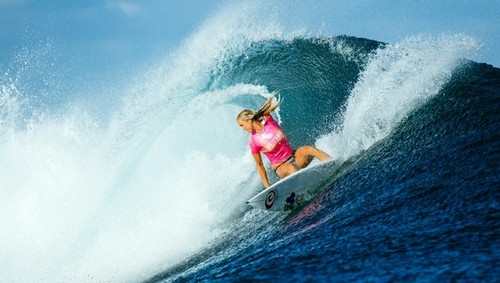 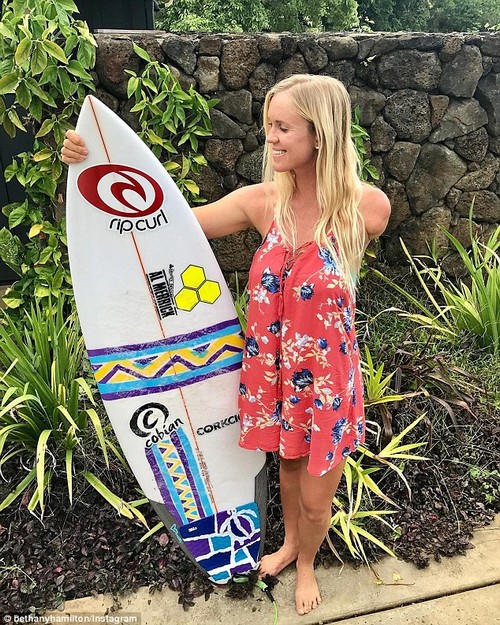 Determined: She lost her arm at age 13 while surfing in Hawaii with a friend 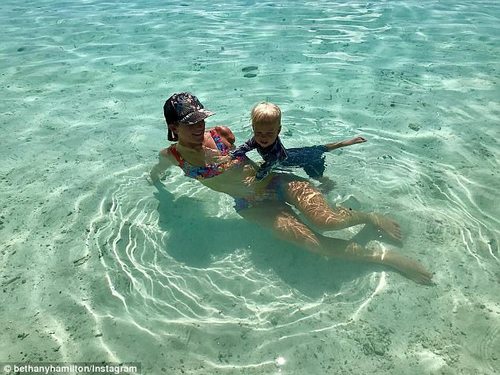 Back on it: She got right back in the water and was surfing a month later, and her son now seems to love the water too 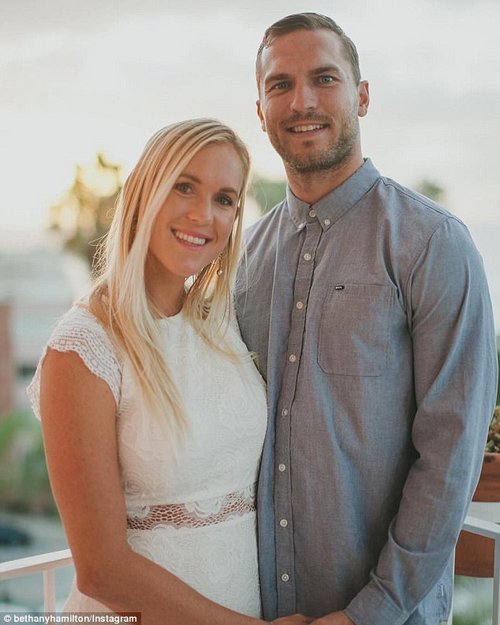 Love; This is the second child for Bethany and her husband, who married in 2013

Bethany made headlines in 2003 when she lost her left arm to a tiger shark while surfing in Kauai, Hawaii.

Her injuries were traumatic: Besides having her entire left arm severed from her body, she lost over 60 per cent of her blood.

Yet she wanted to get back to her passion, and was surfing again a month later. She’s gone on to publish the autobiography Soul Surfer: A True Story of Faith, Family, and Fighting to Get Back on the Board, which later inspired a movie starring AnnaSophia Robb.

‘Beyond stoked to finish 3rd… as the wildcard! LOVED competing & looking forward to more adventures,’ she tweeted after the event.< /span>

It was the sixth time Bethany competed on the elite tour, with her previous best a ninth place in 2010. 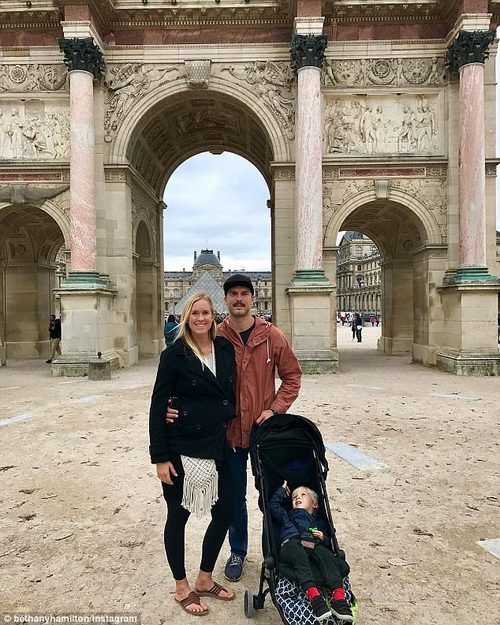 World travelers: The family recently went to Paris for a vacation

The only concession made to her handicap is a handle on the surfboard, which allows her to duck-dive under approaching waves when she paddles out.

She spoke after making the quarter-finals in Fiji about what it meant for her to compete among the best.

‘I know I’m in a unique position to hopefully encourage young girls… to chase their dreams,’ she said.

‘Even after losing my arm I’m still doing everything I hoped I could do. I’m a reminder for young girls that you can do it if you set your mind to it.’

Then this summer, she was inducted into the Surfers’ Hall of Fame in California.

Bethany has clearly found time to maintain her surfing career with one child, so it’s unlikely having a second will slow her down. 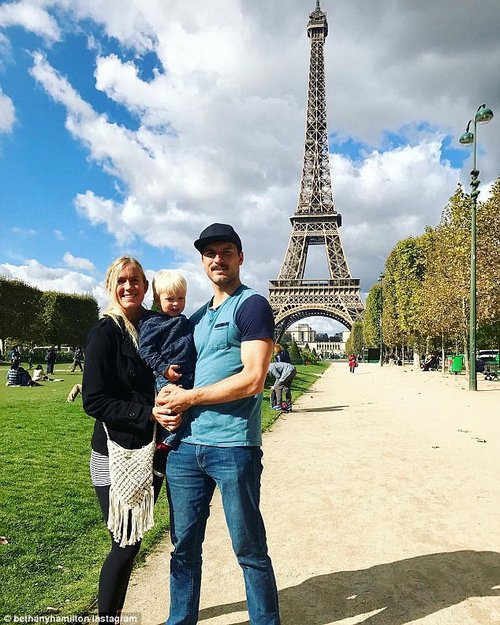 ‘Having a baby, you pretty much have to plan ahead everything, especially since I’m nursing him,’ she told People in 2015. ‘I’m attached to him in a sense because I have to nurse him every two to three hours. So I’ll feed him and go surf for a little bit, and try to get back in time or sometimes we’ll pump a bottle and my husband will take over.’

‘It’s definitely such a big adjustment. Even surfing, I’ll just be thinking of him. I’ll get back from the beach and I’m like, “Oh, I’ve missed you little guy!”‘

She’s also unlikely to give into pressure to maintain a hyper-toned figure during her pregnancy or immediately after.

‘I’ve seen many comments on “her post birth body.” I find it silly for us as women to worry about our body as we grow a human being inside of us!’ she wrote shortly after having her first. ‘It is such an amazing feat to go through pregnancy. And then you have this wonderful lil being that is part you and part of your significant other.

‘It’s natural and HEALTHY to gain weight,’ she went on. ‘It takes 9 months for our bodies to change and grow. So I can say it’s alright to take your time, maybe about 9 months, to get back to the new, healthy, beautiful, and normal you’ 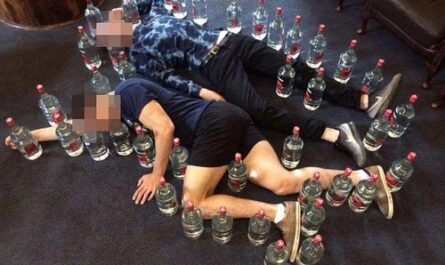 Bouncers called in to alcohol-fuelled party at Oxford

What Premier Clients Love About Shutterstock