Authorities in south China have recently fined a budget hotel for breaking a rule on rejecting ethnic minority Uyghur guests.

Chinese police have reportedly ordered hotels across the country to ban bookings of visitors from the north-western region of Xinjiang, who are predominantly Muslim.

The harsh rule is part of new security regulations linked to the 19th Party Congress which is set to begin on October 18.

Uyghurs banned: 7 Days Inn is a Chinese chain with hotels across the country (file photo)

According to Radio Free Asia, a member of staff at the Shenzhen hotel confirmed that the 7Days inn had to pay a fine for accepting a guest from Xinjiang.

A hotel employee reportedly said: ‘The details would be immediately available to police via a shared database. Police could veto any guests they believed to be a threat.’

It’s unknown if the ban has been extended to upmarket hotels, or to budget hotels that belong to international or domestic chains. 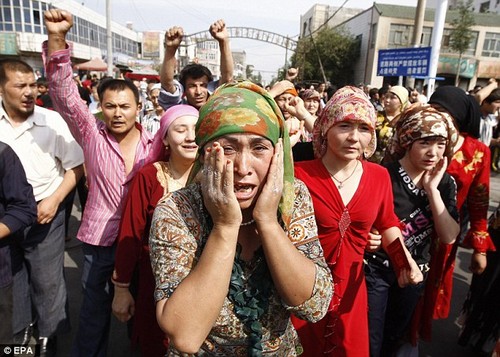 According to Chinese media, officials are extremely concerned about terrorism, and may fear an attack by Islamic extremists.

Beijing blames some Uyghurs for a string of violent attacks and clashes in China in recent years.

The move, which the government says is aimed at combating ‘terrorism’, has been criticised by human rights groups, as critics say the government has exaggerated the threat from the ethnic group.

Many Muslims in Xinjiang say they face widespread discrimination, with a recent clampdown on Uyghurs having religious items such as the Koran.

Parents face heartbreaking wait to see if baby will live

5 Must-Have Accessories, for the DJI Mavic 2