New to zines? Check out our introduction to their history, how they reflect social change, and how they’re becoming a mainstream trend – all over again.

Zines are, at heart, independently created and published magazines that tell niche stories for niche audiences. Historically, they have been venues for the counterculture to freely share ideas. They disseminate the voice of people under oppressive rule. They are even a vehicle for hawking Kanye’s new shoe. Zines are for everyone, equally.

They are one of the hottest trends right now in visual art and social media. Print and digital alike – anyone can create a zine. The independent press – both print and digital – is one humanity’s greatest achievements; the free speech it facilitates is a pure form of democracy. Zines throughout the eras have expressed the social and political tensions of their times.

So, we’ve prepared a guide to help you follow the trend. Consider this your primer on the zine world – because after reading and seeing some examples, you may want to create your own, and we’re here to help you make that happen.

We can trace the zine’s heritage back to colonial America. Thomas Payne’s “Common Sense” was published in 1776 as a pamphlet, setting forth his arguments in favor of American independence. Revolution-era pamphlets evolved into other media and topics, helping advance issues like emancipation and women’s suffrage.

Zines, as we know them today, started in the 1930s, and they were originally called fanzines or perzines. Science fiction magazine fans created and self-published them, bringing their community together. During the ’60s, zines connected members of the counterculture and shared ideas that reflected the great social and political changes of the era. 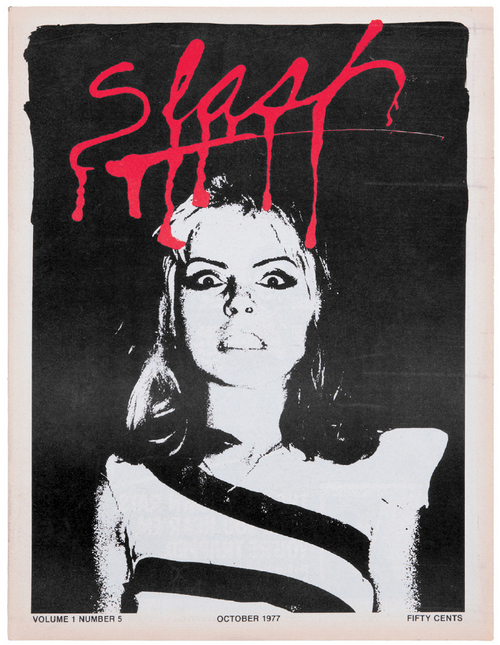 Then punk happened in the ’70s, and the zine style we know exploded. With punk came DIY, torn things, and a proudly crusty disassemble-everything ethos. With the ’80s and the explosion of indie labels and concert venues, zines became a way of promoting the bands’ concerts and connecting the fans of these large-but-relatively-subterranean communities.

Recording labels and distributors like Homestead Records were publishing their own zines. Gerard Cosloy manned the editor-writer position there (in addition to running the label) while also publishing Conflict, a legendary underground punk and hardcore-focused publication that still pops its head up from time to time.

The publication Factsheet Five published reviews of zines through open submission, from which a network of “zinesters” was developed. The 1990s brought about the riot grrrl era, from which “girl zines” arose. That’s how we get to where we are now. 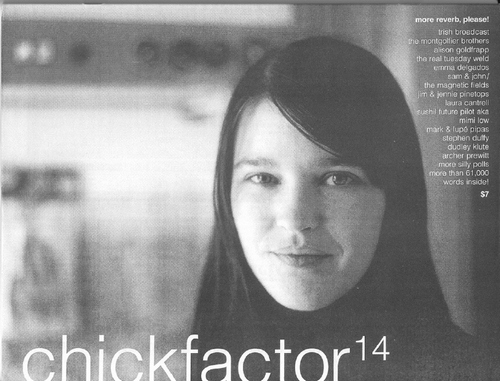 The proliferation of zine culture has yielded such unifying and defining documents that almost every major university, in the USA and acround the world, has a library of zines.

The Comeback – or Zines in the Social Media Era

Heavily leaning on the principles of collage, and largely influenced by the use of the photocopier (in earlier decades), zines are still loyal to paper cutouts and noise and grain textures with rough-edged layers. The style is uniquely undesigned; it is a raw look that stands out in a polished digital world.

Today, social media has given this art form its most unprecedented connectivity to date – a new home and a new audience in the digital age. This audience is limited only by its particular subject matter, not access to the physical copies themselves. 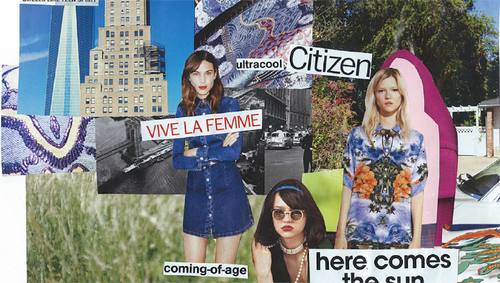 As far as digital zines go, production cost reduces to – essentially – someone’s time. Plasma Dolphin, Pop Culture Puke, Cry Baby, and Cherry all have major readerships, and they are polished but still maintain the DIY aesthetic. Many social media accounts now do the work Factsheet Five did in the past.

In politically divisive and socially concerning times, the zine is perfect for sharing so many voices. Social causes like modern feminism in film and Black Lives Matter produce a breadth of zine offerings. Any cause is likely to have a zine genre dedicated to it.

A zine produced today has the chance to reach anyone with an internet connection, anywhere around the world. We no longer have to count the coins in our change jars to see how many copies we can print off.

If you’re a human with ideas or interests, chances are fairly great that there are several other humans sharing these ideas in a zine – from silly shower thoughts to discussing the most serious existential threats. Since the internet made communication generally easier, online zines can facilitate any voice – even those without platforms or coding experience. Social media-made platforms are available to nearly everyone.

We can see that zines unite distant fans with shared interests, but they can be community projects, too, connecting people not only through shared interests but also by bringing them together to actually create zines in real time.

Based in Denton, TX, Spiderweb Salon is an arts collective providing a hub for those who may not otherwise share their creations. As a nourishing, collaborative, inclusive club free to all comers, it is a valuable community service that embraces weirdos and closet artists, writers, and musicians. Among many social and socially conscious offerings, they facilitate live events, like poetry readings and musical performances.

To bring non-performance-minded creative people together, they created around 40 zines in the last six and half years, which nurtured the curation of zines from outside the collective. Their leader, Courtney Marie, shared its library with us for a look inside.

I asked Marie about introducing zines into Spiderweb’s curriculum.

We started making zines to incorporate more people into the collective, because there are people who don’t want to be on stage, but they’re still producing, still writing, still drawing. Giving those people a chance to be a part of things as well was important to us.

The first zine project they undertook was bringing writers and artists together.

Around 30 or so people participated, and we paired an artist with a writer. They had to meet each other, talk, and figure out what their zine was about and actually produce it – the results were really great.

The zine workshops are how we incorporate new people into the collective. If you show up to one of those, you get to meet the people who are constantly doing stuff, and it’s low-key; you don’t have to talk to a lot of people if you’re shy. You can observe and work on stuff.

What started as an open, five-hour workshop became a regularly scheduled project, with themes laid out beforehand.

We’ll do that so new people can know who the regulars are, everyone knows the theme, and people are more encouraged to interact, instead of coming and going. 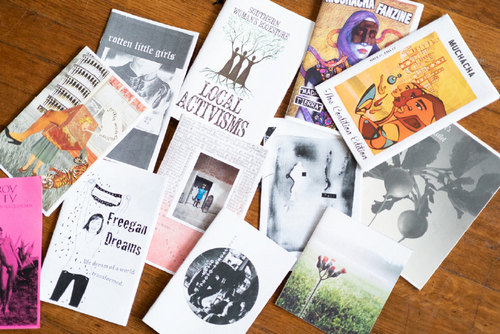 The last one was called the Book of Shadows, which was our magic zine. That was the first scheduled start time, with people showing up on time and introducing themselves. I just asked them to talk about what magic means to us, even if you’re not a witch or anything. There are things we still see as magic. Some things like magic people in our lives, people who can change a room or how you feel. Our daily rituals, which keep us sane, which are their own forms of magic. Like waking up and putting on the coffee.

Stores that sell zines are major hubs for this culture. These are places where people can send their zine, and it will be displayed and made available to others.

My almighty, holy grail of zine shops is Quimby’s in Chicago. It’s a massive store. They sell our zines and have stuff from all over the world. The great thing about zines is that they’re super accessible, and like $2 to maybe $10. They’re cheap and a good way to disperse information.

Marie closed with mention of the social side of zine production.

We did a series of small zines to dispense for protests. Basically, a ‘How to Protest’ – things you should be aware of when you’re going into a protest situation. We did one for Black Lives Matter, so if you want to be an ally you know how to do that appropriately. We’ve done a lot of political how-to zines to educate people. One of those small informational zines costs 3¢ to copy; so you just fold them up and pass out the stack to a crowd. 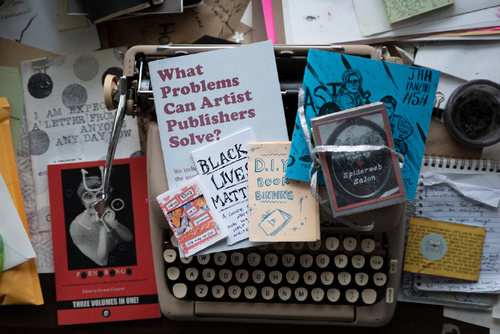 What Do You Want to Say?

Zine culture is once again a robust, vigorous, lively movement that showcases the importance of individual voices – a sort of Original Internet. Zine producers now use the actual internet to reach farther and faster than ever before. The more handmade their creations look, the better. This is a direct line to the person behind the creation, and no editor can dampen your enthusiasm or conceptual wordplay – much less the subject matter.

Whether you have some old recipes to share with like-minded home chefs, or you want to change the world with fiery words and eye-catching imagery, you can find an audience (as well as some peers) with just a little work. The only limits are imagination and motivation. Don’t hem yourself in – consider other media you can work with to share your message. People with little to no money can go to the local library and share their digital zines, use the #zine hashtag, and see how far it goes into the ether. You’ll never know what your creativity sparks in someone else who didn’t know they were looking for it.

Turn a Sketch into Digital Art with This Complete Guide

Sacked Catalan leader ‘is and will remain’ the president

One thought on “Design Trends, An Introduction to the Return, of Zine Culture”