A Georgia lawmaker – who is the wife of President Trump’s former health secretary Tom Price – has been slammed for suggesting that people with HIV should be quarantined to lower the spread of the virus.

Betty Price, a Republican state representative in Atlanta and a trained anesthesiologist, made the staggering claims at a videotaped hearing on Tuesday to discuss healthcare and HIV treatment.

Rep Price said: ‘My thinking sometimes goes in strange directions, but before you proceed if you wouldn’t mind commenting on the surveillance of partners, tracking of contacts, that sort of thing. What are we legally able to do.’

She added: ‘And I don’t want to say the quarantine word, but I guess I just said it. 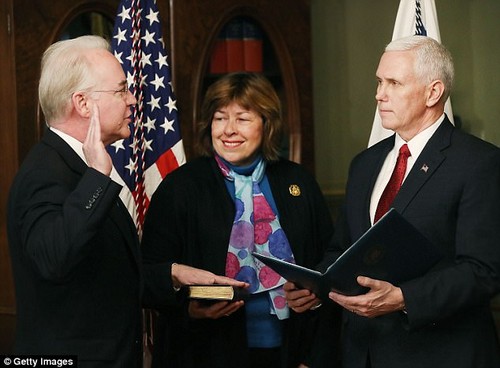 Betty Price, a Republican state representative in Atlanta and a trained anesthesiologist, made the staggering suggestion that HIV patients be quarantined at a hearing on Tuesday to discuss healthcare and HIV treatment. Pictured: Rep Price (center) with her husband Tom Price (left), the former health secretary, being sworn into his role by Vice President Mike Pence in February

‘Is there an ability, since I would guess that public dollars are expended heavily in prophylaxis and treatment of this condition. So we have a public interest in curtailing the spread.

‘What would you advise or are there any methods legally that we could do that would curtail the spread.’

Her words, first reported by a gay-focused website in Georgia, sparked uproar.

Georgia ranks fifth among states for new HIV diagnoses. In 2014, 50,000 Georgians were diagnosed with HIV in 2014. In 2015, the state had the highest rate of new diagnoses in the country. According to CDC figures, one in 51 Georgians will contract HIV in their lifetime.

The epidemic is particularly severe in Atlanta, which is home to more than half of the state’s population.

‘Downtown Atlanta’s rate of HIV diagnoses is as bad as Zimbabwe or Harare or Durban,’ said Dr. Carlos del Rio, co-director of Emory University’s Center for AIDS Research, said in 2016.

Speaking to HIV Plus, Dazon Dixon Diallo, director of the Georgia Coalition to End HIV Criminalization, said Price’s words were an indication of the attitude towards people with HIV in the South.

‘When we come into spaces like this and we hear questions around how legally far can we go to isolate people or even quarantine people, then it just lets you know that we have a real uphill battle,’ Diallo told the magazine.

‘It shows the amount of work that still needs to happen to educate elected officials on the reality of the lives of people living with HIV.

‘I’m hoping Rep. Price would be open to sitting down, meeting with folks, hearing how those comments sound, and recognizing that’s not the direction we need to go in.’

DailyMail.com has reached out to Rep Price for a comment.

The saga comes just weeks after the CDC declared that people with HIV cannot transmit the virus to sexual partners if they have suppressed their viral load with medication.

The statement, made in September, was hailed as a breakthrough against stigma, and an incentive for people to get tested and treated.

A person with HIV becomes ‘undetectable’ when treatment suppresses the virus to a level so low in their blood that it cannot be detected by measurements.

Scores of studies on more than 58,000 sex acts have shown that if a person is undetectable and stays on treatment, they cannot pass HIV on to a partner.

The strength of this association first became clear a few years ago, and gradually health officials have been acknowledging the results.

17 mind-bending tricks that once in my life, so handy

13 delicious and relatively unknown snack in pita bread, which are ideal for picnics