This year marks 100 years since the 1917 Russian Revolution, which led to Vladimir Lenin taking control of the Soviet Union. When Lenin died in 1924, Stalin rose to power and became the state’s authoritarian leader.

Horrifying photos have revealed life inside Joseph Stalin’s gulag prisons, where people were worked to death in Soviet labour camps through the mid-1900s.

Between 1929 and the year of Stalin’s death in 1953, 18million men and women were transported to Soviet slave labour camps in Siberia and other outposts of the Red empire – many of them never to return.

Labourers in the prisons worked up to 14 hours a day on massive projects, including the Moscow-Volga Canal, the White Sea-Baltic Canal, and the Kolyma Highway.

Images show dead bodies of thousands of people in amass grave in Katyn, Poland, in 1943 and prisoners putting one of their own to rest under the ground after he died working in a forced labour camp in Vaygach Island in 1931.

Meanwhile a 1932 photograph show prisoners at work building the White Sea-Baltic Canal – a project which was entirely made through slave labour and where 12,000 people died while working amid the harsh conditions.

By the time the last Soviet gulag closed its gates, millions had died. Some worked themselves to death, some had starved, and others were simply dragged out into the woods and shot. 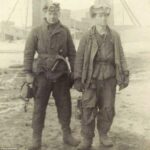 These pictures serve as a harrowing reminder of the true horror of the Soviet-era gulag prisons run by Joseph Stalin betwen 1929 and 1953. A 1932 photograph (pictured above) show prisoners at work building the White Sea-Baltic Canal – a project which was entirely made through slave labour and where 12,000 people died while working amid the harsh conditions

Between 1929 and the year of Stalin’s death in 1953, 18million men and women were transported to Soviet slave labour camps in Siberia and other outposts of the Red empire – many of them never to return. Although they were created under Vladmir Lenin, the gulag system reached its deadly peak during Stalin’s rule

Philosopher Pavel Florensky was arrested on February 26, 1933 for ‘agitation against the Soviet system’ for allegedly plotting to overthrow the state and restore, with Nazi assistance, a fascist monarchy. Florensky was sentenced to ten years of labor in Stalin’s gulags, but he would not serve the full ten years. three years after this picture was taken, he was dragged out into the woods and shot and killed

Yuriy Tyutyunnyk, a Ukranian General who fought against the Soviets in the Ukranian-Soviet War, was allowed to live in Soviet Ukraine after the war until 1929. When Soviet policies changed, he was arrested and taken to Moscow, where he was  imprisoned and put on trial. In December 1929, he was found guilty of anti-Soviet agitation and sentenced to death. He was executed by a firing squad on October 20, 1930

Colonel Stepan Garanin, was at one time the chief of the Kolyma Force Labour Camps, where he was known for torturing prisoners. He was eventually arrested in 1937 and accused of obtaining false testimony by means of torture. He was sent to a camp in Oxerlag, in Central Siberia, and died a few years later. It is believed the 1903 on his mugshot is an administrative number

Prisoners in the slave labour camps worked on a number of different projects across the Soviet Union, including the construction of the Kolyma Highway. Today, the highway is known as the ‘Road of Bones’ because so many workers died building the roadway that they used their bones in the foundation of the road

Polish families are deported to Siberia as part of the Soviet Union’s relocation plan. The gulag held many types of prisoners including political prisoners, a group including not only real opponents of the Soviet regime but also many innocents caught up in the paranoid clutches of the Soviet secret police. In Poland, influential families in conquered states would be forced into labour to help systematically destroy their culture

Some prisoners, like the ones pictured above, were forced to work on project for secret police on Vaygach Island, which sits in the Arctic Sea between the Pechora Sea and the Kara Sea. A group of Inidiginous peoples, called the Nenets, used to make pilgramages to the island once in his or her life, but the tradition was put to an end when the Communist government moved in and created a gulag prison camp

While on the polar-bear infested Vaygach Island, prisoners were forced to mine for lead and zinc in sub-zero freezing conditions. The island has a cold tundra climate, where temperatres average -20C in the winter. Rocks across the island are heavily covered in ice

A gold mine in Magadan, pictured in the 2970s, was built by prison labour during Stalin’s reign. Moscow’s fragmented gold industry has struggled to access vast reserves in inhospitable parts of the Far East, a region first mined in the 1930s by prisoners of Soviet leader Josef Stalin’s gulags

The bodies of hundreds of Polish people lie dead in a mass grave in Katyn, Poland. By the time the last Soviet gulag closed its gates, millions had died. Some worked themselves to death, some had starved, and others were simply dragged out into the woods and shot

The dead bodies of political prisoners, murdered by the secret police, lie inside of a prison camp, Tarnopil, Ukraine, July 10, 1941. The Soviet NKVD secret police carried out a series of mass executions against political prisoners across Eastern Europe during World War II. The majority of the killings accurred in Poland, Ukraine, the Baltic States, Bessarabia and other parts of the Soviet Union. The total number of deaths reachs approximately 100,000 victims in the span of just a few weeks

The White Sea Canal (construction pictured above) was built primarily with primitive tools, like shovels, pickaxes and wheelbarrels. The canal today, however, is manely useless as it’s too shallow to be used by large ships and covered in ice more half the year

Prisoners digging clay for the brickyard, Solovki Island, USSR, circa 1924. The prison on Solovki Island was intended as a remont detention locatoin for socialist opponents of Soviet Russia’s Bolshevik regime. At first, the prisoners at the camp weren’t forced to work, but when prisoners from the old regime arrived at the camp, guards put the political prisoners to work

A miner who died working in a forced labour camp was surrounded by prisoners as he was buried on Vaygach Island. Typical gulag labor was exhausting physical work. Toiling sometimes in the most extreme climates, prisoners might spend their days felling trees with handsaws and axes or digging at frozen ground with primitive pickaxes

Two Lithuanian political prisoners get ready to go to work in a coal mine in Inta, USSR. The Inta labour camp existed from 1941 to 1948, and prisoners were mainly engaged in the mining of local coal deposits. The number of inmates at the camp reached 20,585 at its highest size. In 1948 , the camp was shut down and reorganized into a special camp for political prisoners

A guard shakes hands with a prisoner, at work cutting down lumber at an unknown camp in 1936. Most prisoners were the victims of arbitrary and severe legal campaigns under which petty theft, lateness, or unexcused absences from work were punished for many years in labour camps

The chiefs of gulags, pictured above in 1932, were responsible for the forcing hundreds of thousands of prisoners into slave labor across the USSR. Gulag was the acronym for the Main Administration of Corrective Labour camp

The directors of the gulag camps gather for a photograph, USSR, May 1, 1934. The prisons held a number of different people, including any person convicted to an imprisonment of more than three years, Soviet dissidents or ‘class enemies’, Soviet cmobatants returned from captivity, and Polish people

This year marks 100 years since the 1917 Russian Revolution, which led to Vladimir Lenin taking control of the Soviet Union. When Lenin died in 1924, Stalin rose to power and became the state’s authoritarian leader. Stalin and his men are pictured above examining the Moscow-Volga Canal, built by prisoners in 1932

Guards walk through a gulag during an inspection in 1936. As of March 1940, there were 53 Golag camps and 432 labour colonies across the USSR. Today’s major cities in the Russian Arctic were originally camps build by prisoners and run by former prisoners

Convicted men sleep inside of a sod-covered house in a Siberian gulag, Siberia, at an unknown date. Prisoners lived in squalid conditions, and many people died of starvation or exhaustion from working too many hours and not receiving enough food from the prison staff

The prisoners weren’t just for adults, however. Pictured above, young boys look at a camera from their bunk beds at a camp in Molotov, USSR. During World War II, the Soviet took thousands from Baltic States and put them into gulags in the far east. Seventy per cent of those imprisoned were women and children under the age of 16

Posters of Stalin and Karl Marx gaze down at prisoners inside of their sleeping quarters at a gulag in the USSR in 1936. In the early 1930s, a severe famin swept across regions in the Soviet Union and six to seven million people starved to death. Until 1934, lack of food and outbreak had started destabalazing the gulag system. It wasn’t until the famine ended that the system was stabalized

Prisoners in a Soviet gulag dig a ditch as a guard looks on in 1936. The convicts in these labour camps could work up to fourteen hours per day. Typical gulag labor was exhausting physical work, as prisoners cut down trees and worked in mines, often suffering painful and fatal lung diseases from inhalation of ore dust. Prisoners were barely fed enough to sustain such difficult labor

Prisoners at work in a gulag pause for a moment’s rest in 1936. By the time the last Soviet gulag closed its gates, millions had died. Some worked themselves to death, some had starved, and others were simply dragged out into the woods and shot. These pictures remind us of one of the darkest chapters of twentieth century history

Many of the gulags and labour camps were built by prisoners. Pictured above, prisoners work to construct lodgings at a gulag in 1936 as guards look on

A ‘penal insulator’ inside of a gulag, Vorkuta in 1945. The Vorkutlag was one of the Soviet’s major labour camps, located just 99 miles above the Arctic Circle near the Pechora River Basic. It was established in 1932 to exploit resources of the Pechora Coal Basin. The city of Pechora was built to support the camp

17 Photographers, on the Rules They Love, to Break

10 Fresh Font Styles for You to Use in Your Designs