Follow the history of the Super Bowl’s most exciting moments with these captivating images, and explore this all-American event’s place in the larger scope of U.S. history.

Since the first game on January 15th, 1967, the Super Bowl has become more than just a sporting event. In recent years, more than 100 million people have tuned in to watch on television. They rooted for their favorite teams, waited for half-time shows, and laughed along with much-anticipated commercials. In some of our most trying times, the country has turned to the Super Bowl for comfort, motivation, and strength.

Every decade, the game comes to mean something new to the American public. But, one thing remains the same: Super Bowl Sunday is a time for families to come together and celebrate. As one excited fan told once told BBC reporters, “There’s Christmas, there’s the birth of my first born child and then there’s the Super Bowl.”

Let’s take a look at just a few of the games that helped shape the last half-century, as well as some of the news stories that dominated the headlines right before they aired.

On January 12th, 1969, the New York Jets defeated the Baltimore Colts 16-7 at the Orange Bowl in Miami, Florida. 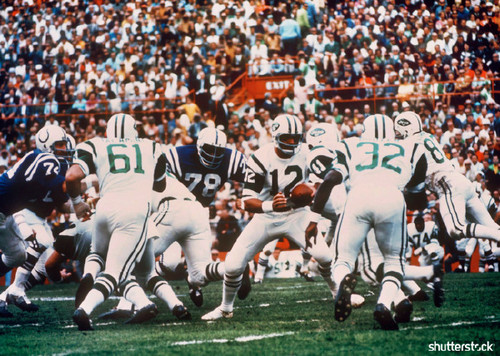 Prior to this historic game, Joe Namath of the New York Jets made a bold claim by stating, “We’re gonna win the game. I guarantee it.” The Jets were major underdogs at the time, but the team proved their quarterback correct; for that reason, this Super Bowl is widely considered to be “pro football’s greatest upset.” In this photo, Namath passes off to Matt Snell. 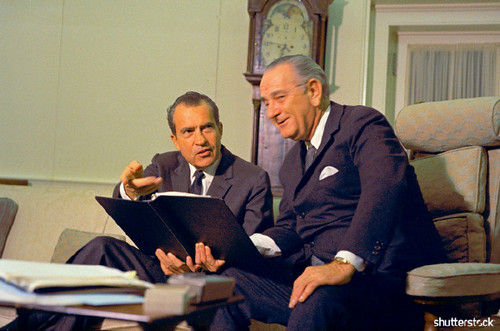 On November 5th, 1968, Richard Nixon was elected President of the United States, securing a victory over Hubert H. Humphrey. He spoke about reuniting a nation during times of upheaval, as the country struggled with tensions both in Vietnam and at home, where the battle over civil rights had reached a fever pitch.

Charles Tasnadi began his career at the Associated Press Washington bureau back in 1964. He captured this photo of Nixon with then-President Lyndon Johnson on December 12th. The inauguration took place just over a week after the Super Bowl on January 20th. 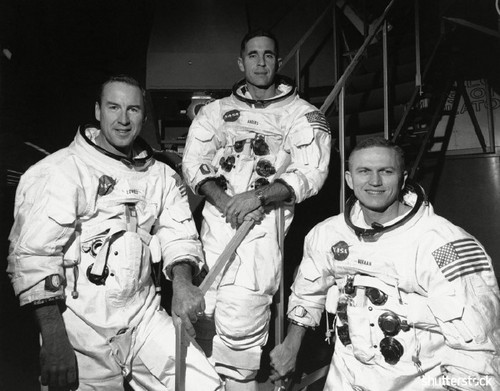 This photo of Jim Lovell, Frank Borman, and Bill Anders dates to December 18th, 1968, just three days before the astronauts would launch into space as part of the Apollo 8 mission. On the 24th, they orbited the moon, marking a turning point for all of mankind.

On January 21st, 1979, the Pittsburgh Steelers defeated the Dallas Cowboys 35-31 at the Orange Bowl in Miami, Florida. 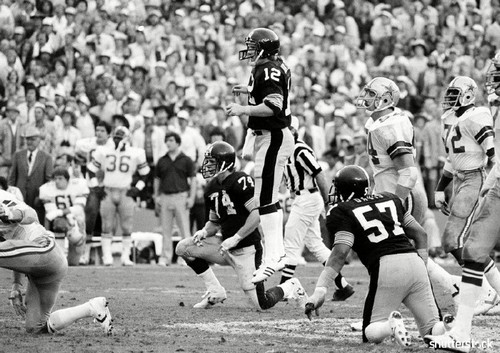 Pittsburgh Steelers quarterback Terry Bradshaw goes up in the air to watch his pass during the XIII Super Bowl against the Dallas Cowboys, in Miami, Fla. Looking on are his teammates Ray Pinney (74) and Sam Davis (57). The Steelers defeated the Dallas Cowboys 35-31 to win the title – 1979. Photo by Kathy Willens/AP/Shutterstock

In what NFL Media analyst Elliot Harrison dubbed “the greatest Super Bowl of all time,” a few unforgettable things happened, including a dropped pass from Jackie Smith, a controversial tripping call, and an MVP performance from Pittsburgh quarterback Terry Bradshaw. In fact, upon seeing his statistic sheet, Bradshaw himself asked, “Did I do all that?” 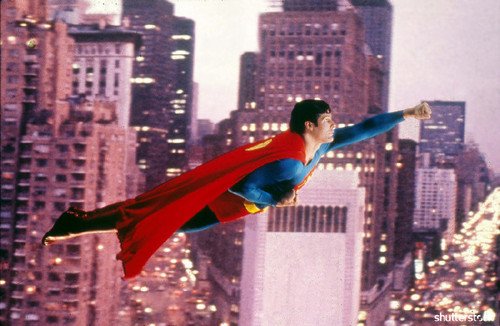 On December 10th, 1978, Superman: The Movie premiered, setting the stage for generations of superhero productions. As Kathleen Carroll wrote for the Daily News at the time, the film provided audiences with a healthy dose of both “pure escape” and “good, clean, unadulterated fun.” With the iconic Christopher Reeve in the title role, this film sparked the imagination and the hopes of a nation emerging from transformative events like the Vietnam War and the Watergate scandal. 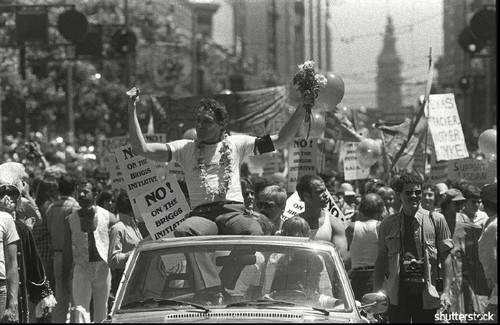 On November 27th, California’s first openly gay elected official, Supervisor Harvey Milk, was assassinated, along with George Moscone, the Mayor of San Francisco. In addition to advocating for LGBTQ rights, Milk had addressed everything from gentrification to income inequality during his brief time in office. His life was cut short when Supervisor Dan White fatally shot him and Moscone.

Senator Dianne Feinstein, then President of the San Francisco Board of Supervisors, found Milk in his office. “It was clear he was dead,” she told NPR decades later. “And that changed the world.” Milk himself had considered the possibility that he might be killed and had made a recording in case of such an event. “If a bullet should enter my brain, let that bullet destroy every closet door in the country,” he proclaimed. Decades later, his legacy continues to inspire Americans to join the political sphere and affect positive change. 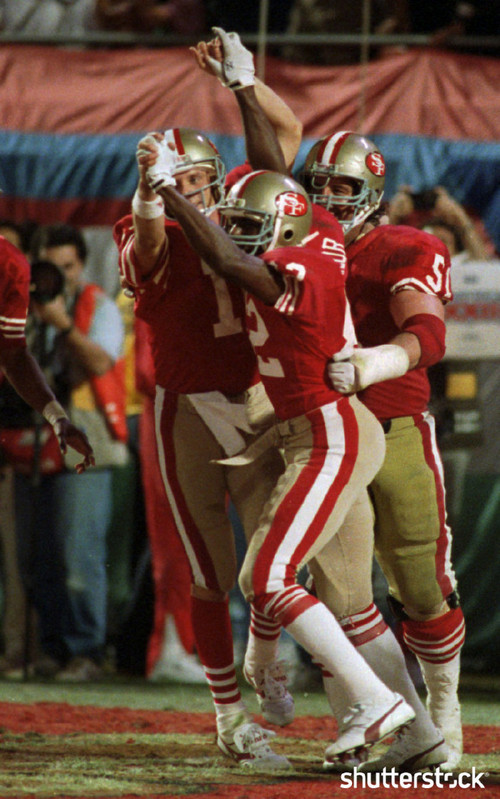 San Francisco 49ers quarterback Joe Montana (16) and wide receiver John Taylor (82) clasp hands after Montana’s pass to Taylor at the end of the fourth quarter resulted in a 20-16 victory over the Cincinnati Bengals at Super Bowl XXIII Jan.22, 1989 in Miami. Photo by Rusty Kennedy/AP/Shutterstock

By the fourth quarter of this tight game, fans were on the edge of their seats. With three minutes left, Cincinnati was in the lead, but everything changed when San Francisco scored their winning touchdown. The next day, The Washington Post described the game as “the most dramatic Super Bowl since 1971.” In this photo, we can see quarterback Joe Montana and wide receiver John Taylor, who completed that final pass with just 34 seconds remaining on the clock. 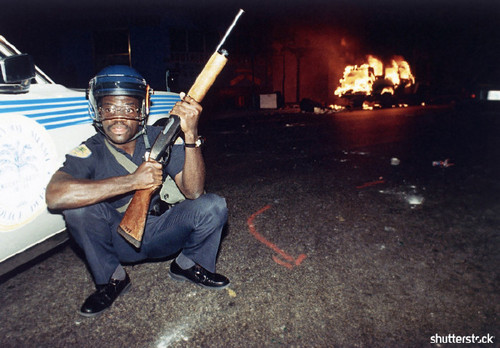 A Miami policeman squats behind a police car holding a rifle, as a vehicle burns in the background in the Overtown section of Miami, Florida. Disturbances broke out after the death of a young motorcyclist who was being chased and fired on by police – 1989. Photo by AP/Shutterstock

Rioting broke out in Miami the week of the Super Bowl after a police officer named William Lozano shot 23-year-old motorcyclist Clement Lloyd, leading to the deaths of both Lloyd and Allan Blanchard, a passenger on his bike. It was Martin Luther King Jr. Day, and the killing of two black men reignited long-standing fears over the treatment of African Americans by police. The aftermath of that event, and the legal proceedings that followed, continue to reverberate throughout the city and the country in general. 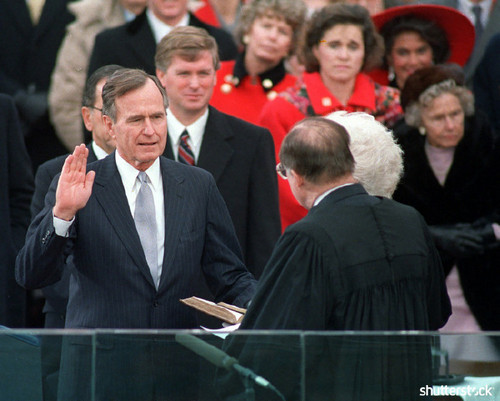 President George Bush raises his hand Jan.20,1989 as he takes the oath of office as president of the United States outside the Capitol. Vice President Dan Quayle watches from behind. Photo by Ron Edmonds/AP/Shutterstock

Two days before the Super Bowl, George H. W. Bush took the oath of office, stepping in as the 41st President of the United States. At the time, the nation was contending with a federal budget deficit. During his inauguration, Bush spoke about bridging the gap between the country’s political parties, easing tensions that lingered still from the days of the Vietnam War, and tackling issues like poverty and homelessness.

On January 31, 1999, the Denver Broncos defeated the Atlanta Falcons 34-19 at Pro Player Stadium in Miami, Florida. 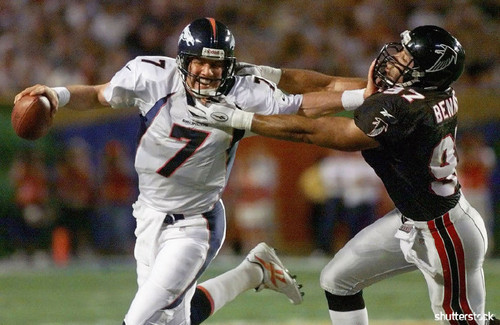 In the final game of his career, Denver Broncos quarterback John Elway (7) stiff-arms Atlanta Falcons linebacker Cornelius Bennett in the third quarter of Super Bowl XXXIII in Miami. Elway earned MVP as he led the Broncos to a 34-19 win for their second consecutive Super Bowl championship. He passed for 336 yards with one touchdown and carried the ball himself for another score – 1999. Photo by Doug Mills/AP/Shutterstock

This second consecutive Super Bowl win for Denver was also the last game for quarterback John Elway, who is now the team’s general manager. As Thomas George of The New York Times put it at the time, the MVP had “saved his best for last.” Mark Kiszla of The Denver Post chimed in too, writing, “Elway was the oldest quarterback to start a Super Bowl. And he made winning look easy.” 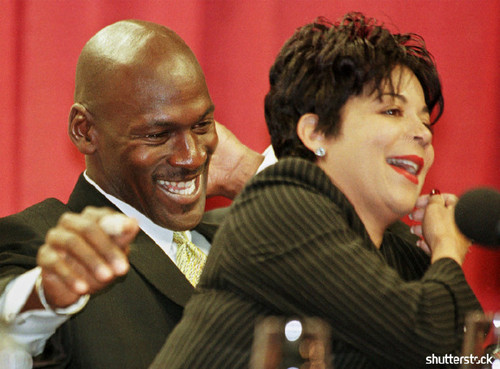 Chicago Bulls’ Michael Jordan laughs as his wife Juanita answers a question during the announcement of his retirement – 1999. Photo by Morry Gash/AP/Shutterstock

Michael Jordan announced his second retirement from the NBA on January 13th. Though he would later return to basketball, the retirement of one of the greatest athletes of all time rocked the sports industry and the world beyond, with President Bill Clinton making a statement in his honor. In this photo from that day, he laughs with his wife Juanita as reporters ask questions. Tellingly, the basketball star would not commit definitively to leaving the game behind. He explained that he was 99.9% sure he wouldn’t come back. As he put it, “I never say never.” 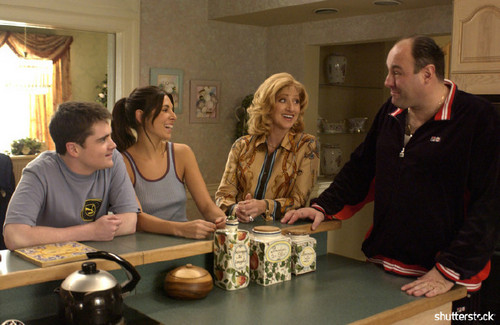 On January 10th, a new TV show premiered on HBO: The Sopranos. The series told the story of the New Jersey mobster Tony Soprano and his family. While the producer David Chase initially had trouble landing a network, it was nothing short of a sensation. In 2007, as the show was in its final season, the cultural critic Peter Biskind described it as “perhaps the greatest pop-culture masterpiece of its day,” and later, Rolling Stone named it as the number one greatest television show of all time, with the journalist Rob Sheffield claiming that the series “changed the world.” 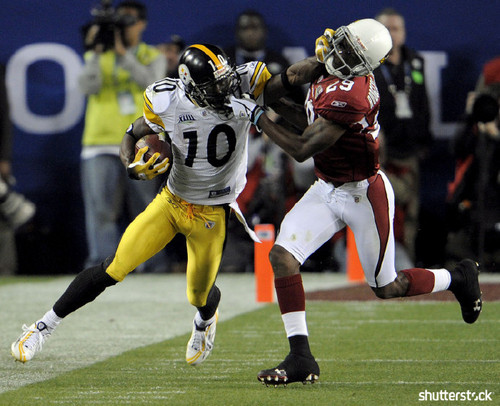 With this game, the Steelers became the first team in history to win six Super Bowls. Wide-receiver Santonio Holmes, pictured here, was named MVP after a game-winning touchdown catch in the nail-biting final minute. In fact, Pittsburgh had tried the very same play earlier in the game but hadn’t made the touchtown, making that last moment all the more dramatic. 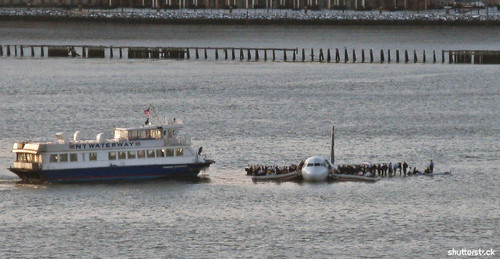 Airline passengers wait on the wings of a US Airways Airbus 320 to board a ferry to be rescued. The jetliner safely ditched in the frigid waters of the Hudson River in New York, after a flock of birds knocked out both its engines. All 155 people on board survived. Plane in River, New York, USA – 15 Jan 2009. Photo by Steven Day/AP/Shutterstock

On January 15th, US Airways Flight 1549 left LaGuardia airport in New York en route to Charlotte, North Carolina. The plane lost its engines when it hit a flock of birds. In order to save the 155 passengers, the pilots Chesley “Sully” Sullenberger and Jeffrey Skiles made the choice to land on the Hudson River.

The incident could have echoed the traumatic events of September 11th, 2001, still fresh on the minds of American citizens. But, all aboard Airbus A320 pulled together to achieve what would later be termed the “Miracle on the Hudson.”

Everyone, passengers and crew included, survived. “This is a potential tragedy that may have become one of the most magnificent days in the history of New York City agencies,” Governor David A. Paterson told the media at a news conference. 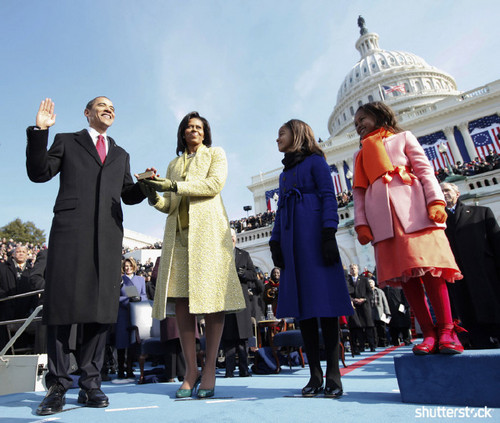 Inauguration Ceremony of United States President, Barack Obama. Barack Obama takes the oath as the 44th US President. His wife Michelle and daughters Malia and Sasha accompany him. – 20 Jan 2009. Photo by Shutterstock 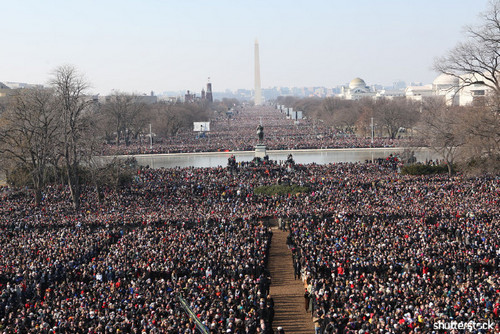 Large crowds gather along the National Mall for the inauguration of Barack Obama, 44th President of the United States. – 20 Jan 2009. Photo by Shutterstock

On January 20th, Barack Obama made history when he was sworn in as 44th President of the United States. The country grappled with an uncertain future, plagued by the Great Recession and by wars in Iraq and Afghanistan. But as an estimated 1.8 million people flooded into the National Mall for the inauguration of our nation’s first African American President, there was cause for hope. “Starting today, we must pick ourselves up, dust ourselves off, and begin again the work of remaking America,” Obama urged in his inaugural address. 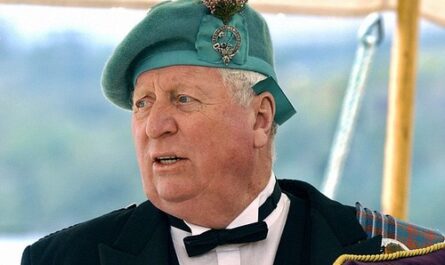 Lost Doctor Who episode Shada has been SAVED by the BBC

5 utility knives, which pass for works of art