In January 2017 a meeting took place in a deserted building in Foggy Bottom. It was conspiratorial. The office in downtown Washington belonged to David Kramer, long time aide to the Republican senator John McCain. His furtive guest was Ken Bensinger, a reporter for Buzzfeed.

Kramer had brought with him a series of confidential memos. They concerned Donald Trump, the man who was about to be sworn in as US president, and his murky ties with Russia. Kramer laid them out on the table. In delicate fashion, he then excused himself and said he had to make a phone call and pay a visit to the bathroom.

Bensinger whipped out his iPhone. He photographed the papers, one by one. Kramer came back half an hour later. Kramer had served as a US assistant secretary of state under George W Bush and was deeply appalled at the prospect of a Trump presidency. For good measure, he shared the memos with other news organisations and Obama officials.

Kramer’s thinly deniable leak ignited a scandal that would consume Washington life for three long years. The memos didn’t quite ease Trump from power. But they did shed light on one of the biggest and longest-running mysteries in 21st-century politics: why is Trump so fulsome and such a suck up when it comes to Vladimir Putin, a KGB guy not over-blessed with charm? The author of the Foggy Bottom dossier was Christopher Steele, a former MI6 officer who spent a career digging up Russia’s dark secrets. His memos alleged that the Kremlin had been sup-porting and cultivating Trump for at least five years. And that in best KGB tradition it had acquired a sizeable amount of Trump kompromat, which could be deployed for blackmail purposes. 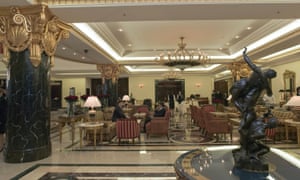 The lobby of the Ritz Carlton hotel in Moscow. Photograph: Bloomberg

Steele knew Russia well. He served at the British embassy as the USSR fell apart, and swapped government spying in 2009 for private business intelligence. In spring 2016 a Washington-based research firm, Fusion GPS, got in touch. Might Steele use his network of sources to investigate Trump? Specifically, what Trump had got up to over the years in Moscow?

Crime in Progress is billed as the secret history of the Trump-Russia investigation. It is more or less that: an entertaining and readable account of the dossier’s origins, and of the cosmic fall-out once Buzzfeed put it online, to Fusion’s fury. Trump, of course, denies wrong doing and says he’s the victim of a witch-hunt. He has called Steele a “failed spy” and Marxist plotter.

The book’s authors Glenn Simpson and Peter Fritsch co-founded Fusion a decade ago. As Wall Street Journal alumni they know how to tell a story. Crime in Progress doesn’t radically alter our understanding of the collusion saga, but there are plenty of colourful details and anecdotes. Once Trump shuffles off stage – in 2020 or later – a movie version seems highly likely. Fusion began its own research into Trump in August 2015, at the behest of a Republican client. It found damning open-source evidence: court documents, corporate bankruptcies and ties to organised crime. It turned to Steele to get intelligence from inside Russia. Many strands pointed there. What Steele might find was uncertain. “We threw a line in the water and Moby-Dick came back,” Simpson writes dryly.

According to Crime in Progress, Steele’s first Fusion memo sketched out the Putin-Trump relationship. It included an eye-popping claim that the FSB spy agency – once directed by Putin himself – had videoed the future president in a compromising situation. In 2013 Trump had allegedly cavorted with prostitutes at the Ritz-Carlton hotel. The future president had watched a “golden showers” show, it said.

That the FSB bugged hotel rooms in Moscow was an open secret, known to western diplomats and spies. Still, Simpson and Fritsch were stunned. After reading the report, Fritsch exclaimed: “What the fuck?” Simpson said: “I know.” Steele assured them the memo was credible. It drew on seven sources, including a Moscow foreign ministry official, a former Russian intelligence operative, and two witnesses from inside the Ritz. Crime in Progress doesn’t tell us who the sources are, alas. There are a few tantalising clues: a single accomplished “collector” gathered much of the intelligence, we learn. Steele calls him – or her – a “remarkable person with a remarkable story who deserves a medal for services to the west”. Great care was taken to keep identities secret. The fate of Sergei Skripal – poisoned in Salisbury by a visiting Moscow death squad – was all too possible.

Once it became clear that Trump was in bed with Russians, Steele alerted the FBI and Downing Street. The book claims he had a memorable encounter with Sir Richard Dearlove, former head of MI6, in the Garrick Club. Dearlove intimated that the Theresa May government in which Boris Johnson served as foreign secretary was suspicious of Trump’s Moscow ties. It had made a political decision not to “push the matter further”, Dearlove told Steele. (Dearlove, contacted by the Guardian, has rubbished the book’s accout of this meeting)

Simpson and Fritsch made their own ultimately doomed attempts to cry fire over Trump and Moscow. They sought out Dean Baquet and David Remnick, editors of the New York Times and New Yorker respectively, the Washington Post’s national security team and other senior US journalists, Crime in Progress alleges. All were interested in the dossier’s explosive content. But publishing it was another matter.

The book’s blunt conclusion: the media failed. There was wall to wall coverage of Hillary Clinton’s underwhelming emails, hacked by Russia’s GRU spy agency and given to WikiLeaks. But the more important story – that Moscow had potentially compromised a White House candidate – went unwritten. Simpson and Fritsch are scathing about the FBI. On the election’s eve it told the New York Times there was “no clear Trump link to Russia” – a misleading statement, even in an age of lies.

After the dossier leaked, livid Republicans went on the counter-attack. Trump’s allies in Congress denounced Fusion and tried to subpoena its bank records. There were lawsuits from Russian oligarchs, hit-pieces from rightwing US media, cyber-raids. These were bruising times. Simpson acknowledges his firm was in a “shitload of trouble”. With an almost $2m (£1.5m) legal bill it very nearly went under. And what of Robert Mueller? The special counsel’s investigation into collusion was sincere but flawed, the book says. Mueller confirmed Steele’s reporting: that the Russians sweepingly and systematically interfered in the 2016 vote. But Mueller, Simpson and Fritsch argue, didn’t follow the money and was overcautious. In the end he failed to find sufficient evidence to prove a criminal conspiracy, in part because of obstruction by the president and his allies.

Three years on, the authors believe the dossier was mostly right. Many of Steele’s allegations have been borne out or have proved “remarkably prescient”, they argue. Others remain “stubbornly unconfirmed”. A handful – including a claim that Trump’s lawyer Michael Cohen met with Russians in Prague – “appear to be doubtful though not yet disproven”. Cohen and other Trump friends are in jail.

In July Mueller gave evidence to Congress. A day later Trump picked up the phone and rang Ukraine’s president Volodymyr Zelenskiy. The riveting impeachment hearings on Capitol Hill suggest the Ukraine drama is season two to the original Russia boxset: with Trump again soliciting favours from a foreign power in order to smear a political opponent. Another day at the Oval Office, another alleged crime. We wait to find out the denouement.