Low-budget filmmakers are always shooting in less-than-desirable locations. Here’s how to get cinematic results in even the smallest spaces.

When it comes to lighting, more space is always better. You have room for stands, modifiers, and the fixtures themselves. However, any filmmaker will tell you that more space isn’t always an option.

This can happen for many reasons – the script calls for it, the budget calls for it, or you just flat-out didn’t get a chance to scout the scene beforehand and tell the producer that they’re crazy. Regardless, knowing how to light a small space is a skill that will pay off time and time again.

With a few tricks up your sleeve, you can get those cinematic shots out of anything from a phone booth to a bathtub. The video below will get you started.

As you’ll learn over time, lighting difficult spaces isn’t that hard – you just need to shift your approach from how you would light a larger environment. It just takes a different way of thinking.

If you’d like to get started with the right tools for the job, here are the lights I used in the video:

Practicals Are The First Brush Stroke 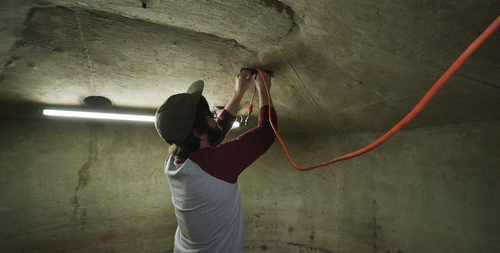 If you’re not already familiar with the term, a practical is a light that plays in your scene. That means it’s visible on-screen as a part of your set design.

Practicals are a great way to light a small space. When placed well, a practical can provide any type of light for your scene – back light, fill light, or even key light. Sometimes a lamp with a shade around it is about as soft and aesthetically pleasing as anything you could get from a film light. In the video, we used Quasar Science tubes for a nice, practical back light. These tubes are great practicals, and they can serve as replacements for standard fluorescent bulbs in regular household fixtures – just with much higher light quality than your average fluorescent tube. They’re also dimmable and very affordable.

Practicals are great because they eliminate the necessity of hiding lights. You don’t need to worry about space for stands, you don’t need to compromise the framing of your shot – you just let them be a part of the scene.

The practical should almost always serve as your first brush stroke when lighting a scene. It’s what’s going to define the motivation for your lighting, and it’s going to help you quickly realize the type of visual you’re going to create.

One common element among great cinematographers is the stellar use of practicals.

The Amazing World Of Hide-able Lighting 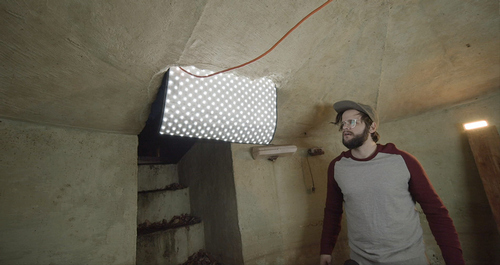 One of the best new things to come out of the lighting industry is hide-able lighting. What do I mean by this?

Well, the thing about film lights is that you need them to be bright. It used to be that if you needed something particularly bright, you needed a big fixture, and those fixtures drew a lot of power, and they were hot.

Now, you have lights with very high output that you can literally tape to a wall. It’s almost ridiculous. In the case of the Falcon Eyes RX-24TDX, you have a light that is fully dimmable, bi-color (can change between daylight and tungsten color temperature), and battery-powered. (Not to mention it’s incredibly bright.) Oh, and one more thing – it’s fully flexible. It’s like a sheet of plastic with a really bright light attached to it. You can fold it, hide it, roll it – it’s like lighting play-dough. Just four or five years ago, a product like this was unheard of, and now there are quite a few products like it. 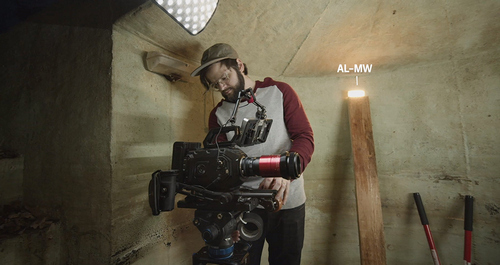 Another new thing in the lighting world is extremely bright and feature-rich battery powered lights. Two great examples in the video are the Aputure AL-MW and the Aputure AL-M9, both of which are really impressive and affordable products.

In the case of the AL-MW, the built-in effects were really helpful when creating the right atmosphere in the scene (we used the faulty bulb effect setting to create the grungy flickering light), and the AL-M9 was a quick fix for some extra hair-light hidden in the ceiling.

Being able to hide such bright lights in a scene (especially ones with built-in effects) is a great way to light your smaller spaces. The more lower-profile lighting you can find, the better.

I would argue that this is the most important part. Once you have a bunch of lights in a small space, controlling the light that comes from them is critical. It doesn’t matter how much light you can fit in a space if you can’t control it.

In a small space, light bounces everywhere. Your contrast ratios go all out of whack, and everything starts to look like a mess. This is where dimmers come in. If you’d like to learn how to make a dimmer, watch this video. 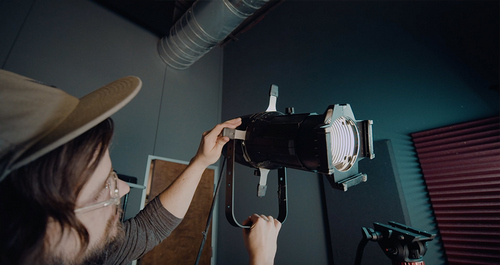 In a small space, I make sure that every light I use is dimmable. It’s the quickest way to dial in the look that you want without a bunch of light spilling everywhere. Once you get all your lights plugged in and you get the picture up, you can go around while looking at the monitor and get each light sitting right at the perfect brightness.

Bonus tip: before all of these flexible panels and bright battery-powered lights came around, my favorite tool was a light called the Source Four Leko – also sometimes called a leko light.

This is an ellipsoidal light with a lens, which allows you to throw the light a good distance without sacrificing brightness. That means you can place the light off-camera and shoot it into the scene without much (if any) light-loss. There are also shutters that allow you to cut the light to a specific shape, allowing you to create the perfect lighting for your scene.

5 cars, where the presidents went to the inauguration

The Most Hilarious Images of Pets on the Internet Right Now