The Welsh will see it in their nightmares. The throw from goalkeeper Wayne Hennessey just before the hour asked questions of his captain Ashley Williams and when he lost out to Jeff Hendrick on the touchline, the Irish midfielder was able to provide a low cross.

Harry Arter’s dummy was born of supreme intelligence, McClean’s finish of confidence and sureness of technique. Hennessey hardly saw it.

It was the kind of goal players and supporters alike will see in their very best dreams for years to come.

A low cross from the right, a dummy at the near post and a jackhammer of a strike from James McClean from 18 yards. 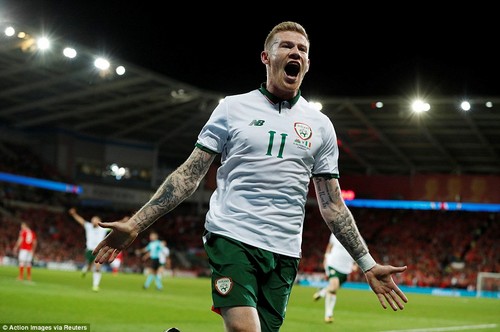 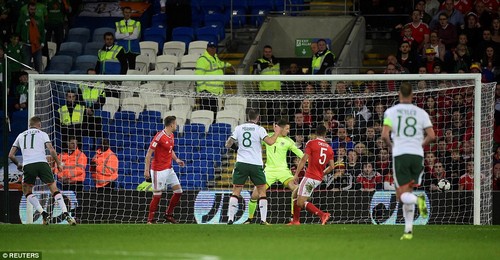 Meeting the ball on the half volley, McClean smashed a right-footed drive into the corner of Wayne Hennesey’s goal 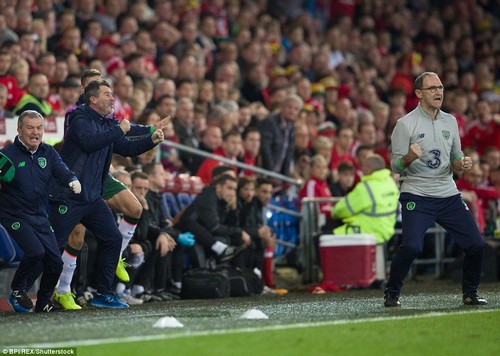 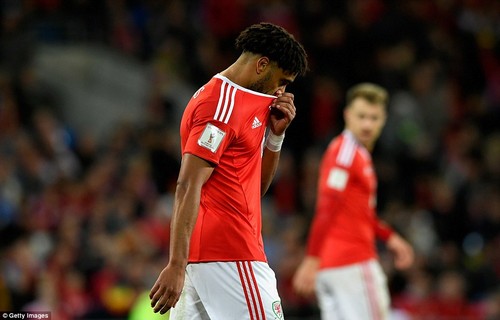 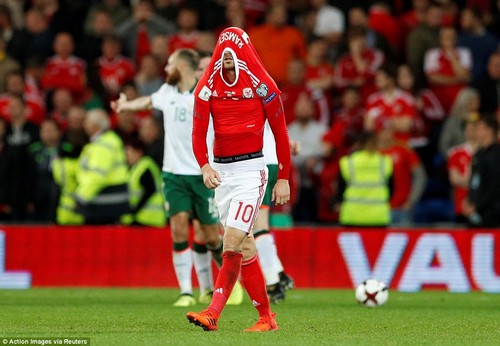 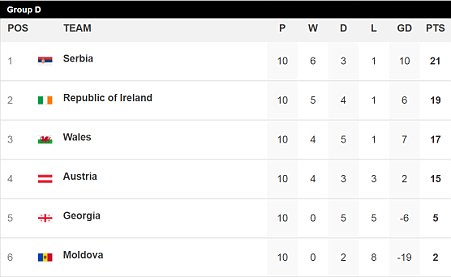 So one World Cup dream is dead and another lives on.

Wales will not have the chance to grace Russia as they did France in the Euros. That is a shame and maybe the absence of Gareth Bale and the concussion suffered by Joe Allen in the first half simply provided too big an obstacle.

But credit Martin O’Neil’s Ireland for their pluck, resilience and organisation. They were second favourites when this game began and not much of what we saw in the first half changed that. But Ireland provided the one moment of real quality in an attritional game and nobody will want to face them in the play-offs now.

One of the highlights of Euro 2016 – perhaps the only highlight for the Home Nations – was watching Wales progress to the last four. It remains one of the great football adventures of recent times.

With that in mind, it was heartening to be here on a night when opportunity beckoned for both of these nations. This was not a ‘Winner Takes All’ scenario, given that group leaders Serbia began the night with the best chance of qualifying automatically in first place, and duly did. 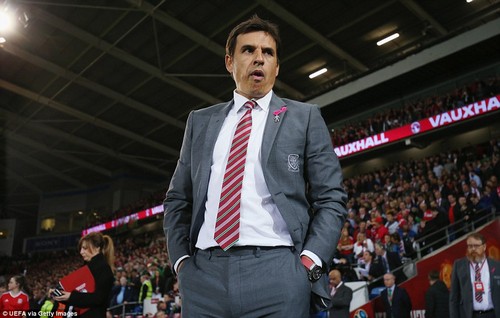 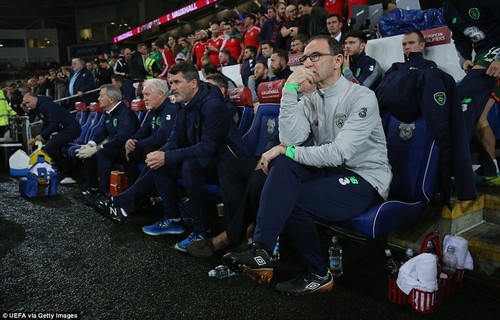 Coleman’s counterpart O’Neill, with assistant Keane, also take their place on the bench ahead of the Cardiff clash 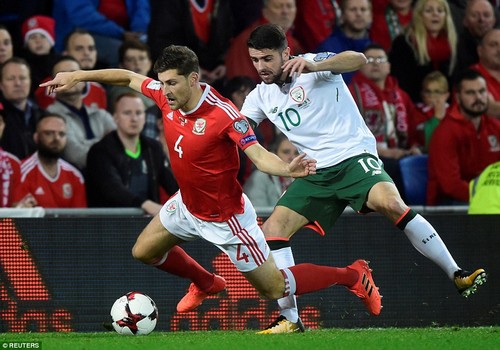 The opening exchanges are dogged, and left back Ben Davies goes down under the pressure of a tackle from Robbie Brady 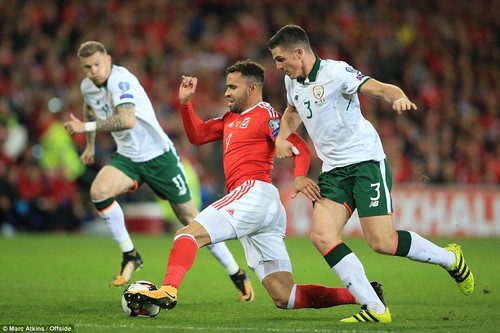 Nevertheless, this still had a knockout feel and that was certainly the way a full house saw it. Wales’ decision to abandon the Millennium Stadium for internationals was controversial and has no doubt cost the Welsh FA some money over the years. But Coleman and his team do benefit from the atmosphere generated at this newer, smaller venue and Ireland found themselves up against a brighter team and a raucous support as they struggled to settle.

The early stages belonged almost entirely to Wales and it was not until midway through the opening period that Ireland managed to maintain any kind of possession. With the Wales full backs pushing high on their opposite numbers, they managed to squeeze the play almost entirely into Ireland’s defensive third. Allen and Aaron Ramsey passed the ball quickly and smartly from central areas and for a while Ireland couldn’t cope. The only thing missing from the pattern were clear Wales chances.

Hal Robson-Kanu headed an early corner over at the near post and then Ramsey shrugged off a hack at his legs to power forwards and drive a shot towards the roof of the goal from 25 yards that Darren Randolph touched over.

Allen was also close, this time in the 20th minute, with a low shot that was deflected wide before Tom Lawrence made Randolph work again soon after with a shot to the goalkeeper’s right. 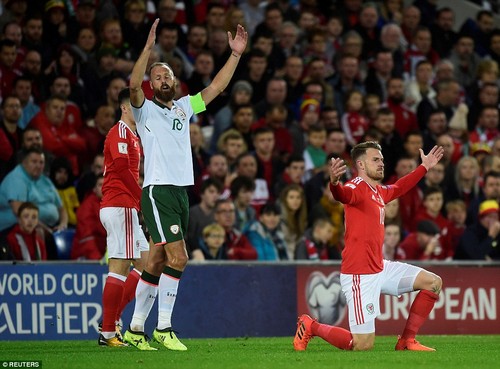 Arsenal playmaker Aaron Ramsey is brought down by Republic of Ireland captain David Meyler, who pleads his innocence 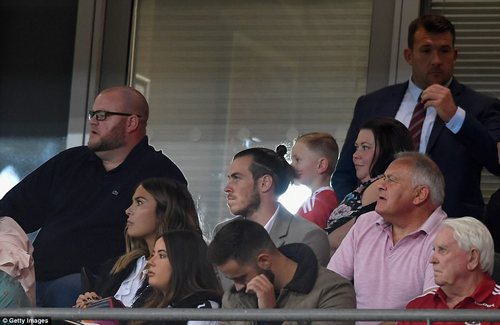 The hosts were without their talisman and star player, Gareth Bale, who watched on helplessly from the crowd 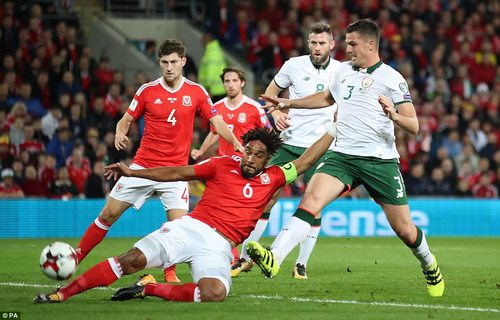 After early Welsh pressure, Ashley Williams is forced to clear his lines after a dangerous ball is drilled into the box 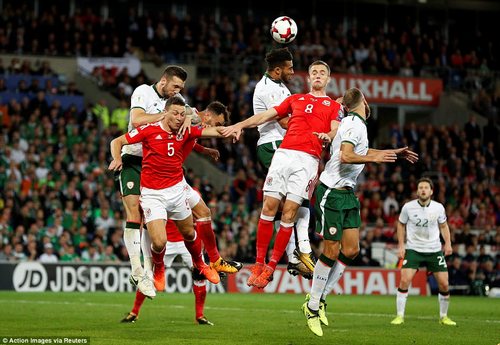 Not until McClean advanced to cross low in the 17th minute did Ireland show any menace but eventually improvement did come.

Hendrick couldn’t react quickly enough to shoot with power when the ball dropped to him from a cross six minutes later and just after the half-hour, Shane Duffy moved down the right to drill a low effort across goal and wide from the angle of the penalty area.

That was probably the best chance of the half at that point and before long Wales were dealt a huge blow as Allen left the field concussed after a joint challenge by McClean and David Meyler. With Bale already absent, Coleman was without two of his best creative players.

As it was, the half ended with Ben Davies wasting an opportunity at a Wales corner. Having peeled away at the far post, the Tottenham defender was in space as the ball was flicked on but a lack of composure cost him as he shot hurriedly over. 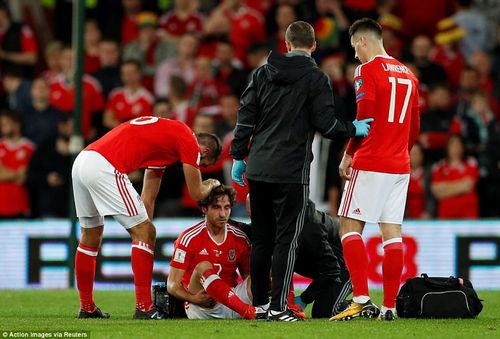 Joe Ledley checks on Allen, who is attended to by the Wales medical stuff, after a landing on his head during an awkward fall 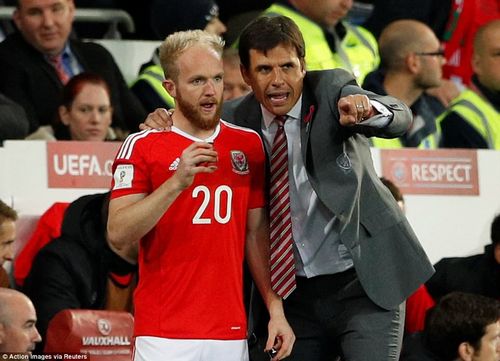 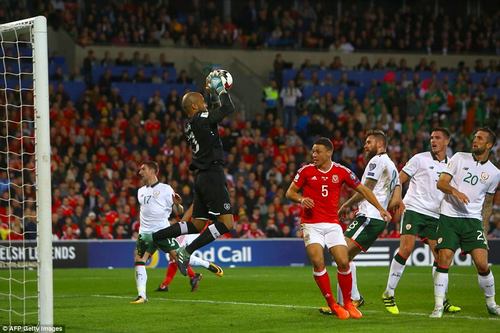 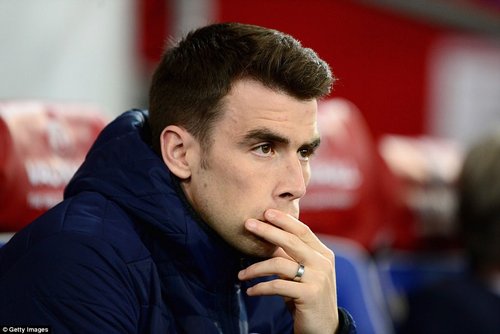 Seamus Coleman, who suffered a double leg break in the reverse fixture back in March, watches his side from the stands 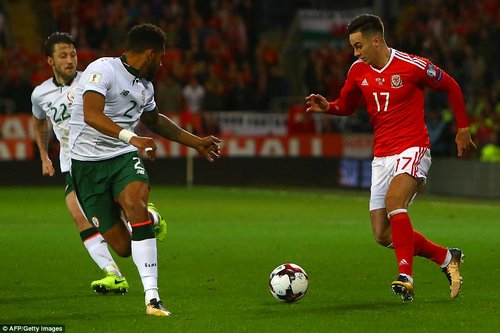 Tom Lawrence, Wales’s hero in Georgia, looks to take on Christie as the Welshman goes on one of his meandering runs

Wales began the second half strongly. This had been a game low on quality but Robson-Kanu’s header from a Jonny Williams cross was certainly good enough, as was the save from Randolph that touched it over the bar.

From the corner Davies headed a good chance over and it seemed as though the pattern of the first half was set to repeat itself. But the Irish goal in the 57th minute changed everything. It was the first time in the campaign that Wales had been behind and was largely a self-inflicted wound. Nevertheless, the dummy at the near post by Arter was smart and the finish by McClean superbly struck.

Andy King soon made way for young Ben Woodburn as Coleman asked the Liverpool forward to make an impact. With 25 minutes to go, Wales certainly needed one.

Wales pushed on and there were half-chances. But without Bale they had lacked cutting edge and when news came through of goals for Croatia in their Group I game, Wales knew they would need a win to snatch a play-off spot. It wasn’t to be. 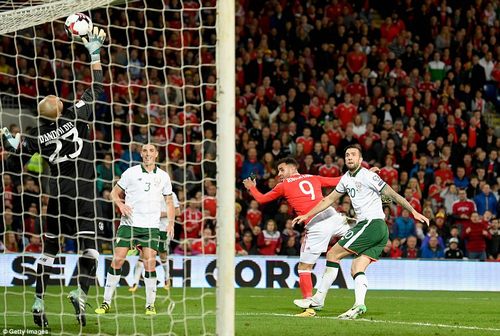 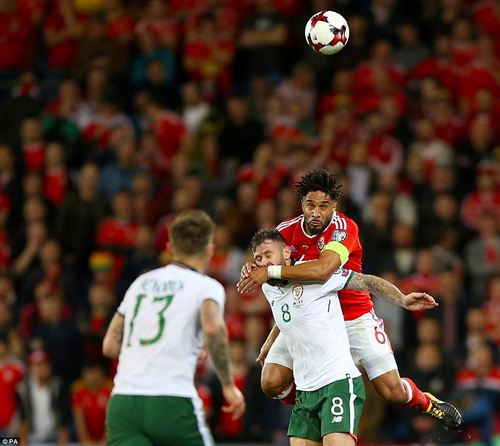 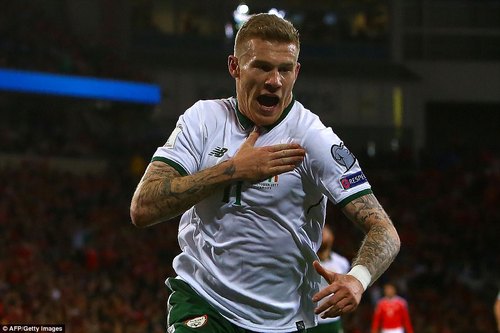 But it was the West Brom star who broke the deadlock in Cardiff, smashing home to give his side the lead 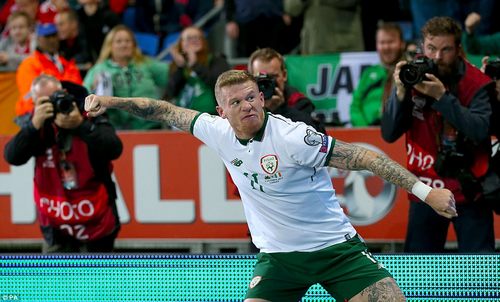 Lifehack: Japanese made knife made from foil, which is still sharper than the “real”

Architecture: House in which to live even at minus 45 degrees