Ivan Lubennikov, one of Russia’s most original and celebrated monumental artists, died at age 70 on Sunday. His funeral was held today at the Kuntsevo cemetery.

His mosaics, murals and mixed media installations can be found in Moscow and other Russian cities as well as abroad. One of his most famous works is the new vestibule for the Mayakovskaya metro station (2005) that causes collisions as passengers gaze up at the mosaic clouds, airplanes and snippets of poetry on the vaulted ceiling.

Lubennikov also did the 24 silkscreen murals in the Sretensky Bulvar metro station and decorative metalwork in the Slavyansky Bulvar station. With Alexander Skokan Lubennikov designed and constructed a structure made of metal with photo- and video-materials at the U.S.S.R. section of the State Museum of Auschwitz-Birkenau (1985).

He also created a three-dimensional metal and stained-glass composition of “Ryaba the Hen” for the Paris Metro. It was installed in the Madeleine station. 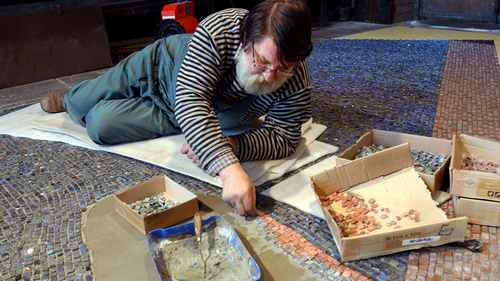 Lubennikov was born in Minsk in 1951 and graduated from the Surikov Art Academy Institute. He received many awards for his work and was a People’s Artist of Russia, a professor at the Moscow State Academy of the Arts Institute, and an academician at the Russian Arts Academy.

Russia broke its daily coronavirus deaths record again on Tuesday as the rising toll and the spike in new cases prompt regional response centers to reimpose restrictions that have been absent since the start of the year.

The government tally reported 895 Covid-19 deaths across Russia in the past 24 hours, bringing the official death toll based on daily figures to 211,696 — the highest in Europe. 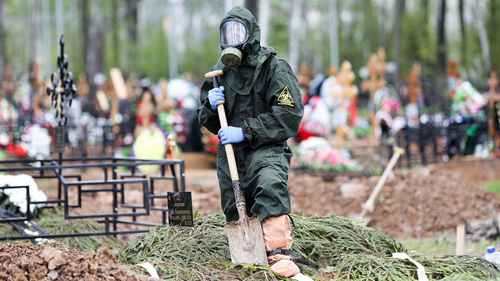 Russia has now reported all-time high numbers of one-day Covid deaths for six out of the last eight days.

Russia’s Covid information center also reported 25,110 new infections, figures not seen since the height of the last wave of the outbreak in January. Russia is the world’s fifth most affected country by the pandemic with 7.6 million total coronavirus cases.

A number of Russian regions reintroduced Covid restrictions — including self-isolation rules and closures of public spaces — in the days after Russians went to the polls to elect lawmakers and local leaders in mid-September.

Russian Prime Minister Mikhail Mishustin on Monday expressed the government’s “serious concern” about the surge in infections, saying hospitalizations have doubled compared with the same period in 2020 and criticizing “insufficient” vaccination rates.

Russia has approved at least five domestically developed Covid-19 vaccines, but its vaccination drive has stalled at under 30% of the population, according to the independent Gogov monitor.

Pumpkin With Sea Buckthorn on Top