Dr Chaudhri, 44, is a psychology professor at Concordia University in Montreal. She is also a terminal cancer patient at a Canadian hospital, where she is receiving palliative care for “high-grade serous epithelial, platinum-resistant ovarian cancer.” In simpler terms, as she puts it, she will never come home.

Dr Nadia Chaudhri is a Canadian neuroscientist. Earlier this month, her Twitter account reached 100,000 followers, and she marked the occasion by telling them she was dying.

“Now that I have 100K followers, I want to talk about #OvarianCancer,” she wrote. “Specifically my gritty story.”

But Dr Chaudhri is not going quietly. Instead, she has used her “gritty story” to issue an urgent warning to others: “Know your bodies.”

Due to her illness, the professor is no longer giving interviews. But on Twitter, she’s offered a painfully detailed account of what’s happened to her.

“The goal is awareness,” she said. “I hope you find this narrative informative.” 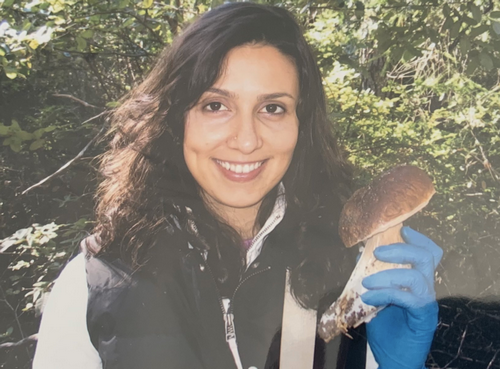 Dr Chaudhri says she first started feeling ill in January 2020. She was “tired, had vague abdominal pain, severe lower back pain & a mild increase in frequency to urinate.”

Her doctor diagnosed her with a urinary tract infection, and treated her with antibiotics and a laxative. For a time, she seemed to get better, but in mid-February her symptoms flared up again. Her doctor prescribed more antibiotics.

“Come March, the pandemic struck,” Dr Chaudhri wrote. “By now my abdomen was bloated and I was in moderate pain. My bowel movements had changed too so I kept taking stool softeners. I couldn’t see my doctor because of the pandemic. I was incredibly tired but I chalked it up to the pandemic.”

In April she was put on yet another course of antibiotics. All this time, she says, her symptoms were not typical of a UTI, but her doctor continued to believe that was the problem.

Meanwhile, Dr Chaudhri underwent two endovaginal ultrasound scans, and showed the second one to her uncle, a gynaecologist. He recommended getting a blood test for ​​CA 125, CA 19 and CEA – “cancer markers.”

Her CA came back at about 26 times the normal level.

The next day Dr Chaudhri visited the clinic of a top gynaecologist in Montreal, where she did another ultrasound.

“Four days later I met her in clinic,” she recalled. “She said 24 of 25 doctors in the tumour board said I had cancer.”

On 10 June, six months after she first started feeling ill, Dr Chaudhri had a laparotomy – a major abdominal surgery to check for cancer.

“They cut me open from sternum to pubic bone,” she wrote. “Indeed, I had cancer.”

Four weeks later, she started chemotherapy. For a number of months, she seemed to improve. Then, in December, her CA began to rise up again.

“It crept up slowly,” she said. “But because this started happening within 6 months of the end of chemo it meant that my cancer had a label: platinum resistant. It had learned to evade the platinum based chemo.”

Things got worse from there. She developed a bowel obstruction, which disqualified her from a clinical trial she’d been on for one medicine. She tried another drug, which didn’t work, and then another, which worked and then stopped working. She was running out of options.

“Between March and now I’ve had more bowel obstructions than I care to count,” Dr Chaudhri wrote on 13 September. “The most recent one hasn’t opened. It is why I have moved to palliative care. I can’t poop or pass gas. I can’t eat. I’ve been on IV fluids for 2 weeks.”

At this point, Dr Chaudhri is no longer trying to “beat” her cancer. It’s not that she lost a battle, she says. It’s simply that the treatments didn’t work.

Tragically, Dr Chaudhri believes that outcome is partly due to how much time was lost between her first symptoms and her diagnosis of cancer. More knowledge is needed, she says – among both doctors and patients.

“The bottom line is that ovarian cancer research is underfunded,” she wrote. “We also need more awareness of symptoms because early detection improves prognosis dramatically.”

Dr Chaudhri’s warning is as simple as it is urgent: “Know your bodies. Pay attention to fatigue and changes in bowel/urinary tract movements. Make sure you understand all the words on a medical report. Do not dismiss your pain or malaise. Find the expert doctors.”

As for herself, Dr Chaudhri says her final journey has been frightening, but also “filled with brightness and love.” She has spent precious time with her husband and son, who is in first grade, and with “friends and a tribe of supporters who have bolstered me into the clouds.”

“I will feast in my new life and welcome everyone to my forest table,” she says. “I am not afraid.”