Norstein was born in the Penza region of Russia, where his family was evacuated as Nazi troops advanced toward Moscow. Two years later, his family returned to the capital, where they lived in a communal apartment with several other families.

Despite studying at an art school, his first job was in carpenting. After two more years of animation classes, Norstein got hired in 1961 at Soyuzmultfilm, the Soviet Union’s top animation studio.

Soviet and Russian animator Yuri Norstein was born on this day in 1941. Norstein has been behind some of the most iconic cartoons from the Soviet era, and The Washington Post has said “he is considered by many to be not just the best animator of his era, but the best of all time.”

From 1961-1973 he worked as an animator on some of the most iconic Soviet cartoons, including “Levsha” (“Left-Handed”), “Kanikuli Bonifatsia,” (“Boniface’s Holiday), “Varezka” (“Mitten”). 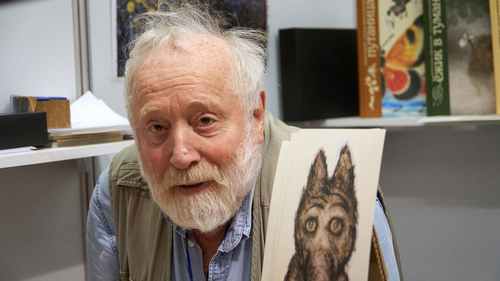 But during his first years at Soyuzmultfilm, Norstein wanted to quit animation and unsuccessfully applied to art school several times. “I met many brilliant directors at [Soyuzmultfilm],” the Vokrug.tv website quoted Norstein as saying, “but my desire to quit was equal to my dislike of animation; I dreamed of painting pictures.”

Eventually, he abandoned these attempts and decided to work toward becoming a director.

In 1973, Norstein started to direct his first animated films for Soyuzmultfilm, and it was from this point that he would be showered in national and international accolades for his work. A year later, Norstein won first place at the 1974 All-Union Film Festival for his cartoon “The Fox and The Hare.”

The hedgehog himself was an spur-of-the-moment creation, according to Norstein, as the filmmaking team couldn’t decide how the character ought to look.

“Apparently, it got to a point when either [the hedgehog] has to work out well, or I have to explode,” Vokrug.tv quoted Norstein as saying. “I remember sitting with the film’s artist [and Norstein’s wife] Francesca Yarbusova and I started shouting so much that she just sat down and drew him. Just right away – done! But I still can’t figure out how we made him so well.”

In 1979, Norstein released another famous movie, “Skazka Skazok” (“Tale of Tales”). In 1984, it was voted to be the best animated film of all time at the Los Angeles Olympic Arts Festival. In 2003, it fell to second place on the ranking as “Hedgehog in the Fog” took the top spot.

In 1981, he started working on “The Overcoat,” a film based on Nikolai Gogol’s novel of the same name. In 1985, Soyuzmultfilm fired him because he was taking too long to finish the film. To this day, Norstein continues to work on the project, with some 25 minutes estimated to be completed so far. The decades-long delay has been linked to his perfectionism that has earned him the nickname “The Golden Snail.”

Norstein does not use computer animation in his films, instead relying on physical mediums to create three-dimensional effects. He’s best known for using multiple layers of glass panes to create an image.

He has published multiple books on the art of animation and has given seminars in Britain, Italy, France, United States and many other countries.The renowned Soviet animator holds an honorary doctorate of fine arts at the Rhode Island School of Design. Acclaimed Japanese animator Hayao Miyazaki has called Norstein a “brilliant artist” whom he admires.

Norstein has been an outspoken critic on major events in present-day Russia, speaking out against the convictions of Pussy Riot members for their anti-Putin performance in Moscow’s Christ the Savior Cathedral as well as the death of lawyer Sergei Magnitsky in prison after he exposed corruption in the Russian government. Pumpkin With Sea Buckthorn on Top