Autumn happens quickly in Eastern Europe with very few of the bright, crisp days filled with fiery foliage and tart apples I associate with my native New England. For that, one needs to head south to the rugged but balmy Caucasus, where autumn lingers far longer; the hot, clear days are perfect for the final apogee of September and October’s jewel-toned bounty: grapes (of course) but also plums, quince, eggplant, peppers, and tomatoes.

This week the light shifted, the temperature dropped and just like that, it’s soup season! Longtime readers of this column will know that this is cause for glorious celebration in my household: the first order of business was to unearth my largest soup pot, which had languished all summer at the back of the pantry. I dusted it off, and put it immediately to work on the stovetop, where it is likely to remain in constant use until next May.

The Caucasus and its magnificent cuisine, which is so delightfully woven into the fabric of Russia’s own, are very much on my mind this week: I got ahold of an excellent matsoni starter, which I immediately used to make an extra-large batch of that yogurt-like product, which is ubiquitous in the three Caucasian nations of Armenia, Azerbaijan, and Georgia. Matsoni, which brims with probiotics, is often credited with the region’s astonishing life-expectancy, where centenarians are quite commonplace. And while the mountain air, heady wine of the region, and general active lifestyle play their role in prolonging life in the Caucasus, fermented milk products are also a factor in that other long-lived nation, Japan, where matsoni — known there as “Caspian Sea Yogurt”—is wildly popular.

Matsoni (მაწონი in Georgian and մածուն in Armenian) is similar in taste and texture to yogurt, but depending on location, starter, and the type of milk used — sheep, goat, cow, buffalo, or a combination of these are common — the microbiota can vary widely. In many studies designed to determine the key yeast that makes matsoni so healthy, scientists and dieticians have identified a wide range of yeasts from the common L. bulgaricus, to L. acidophilus, S. thermophilus, Lactococcus lactis, L. lactis subsp. cremoris, Geotrichum candidum, Saccharomyces, Candida, and others, all of which promote excellent gut health and are key to addressing any digestive disorders. 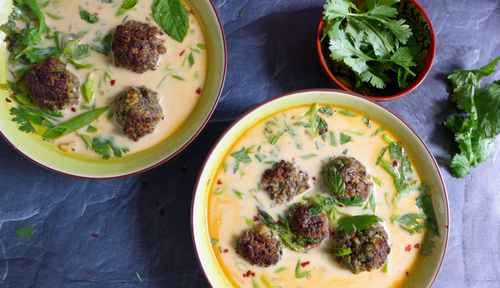 The method of production of matsoni is similar to that of yogurt: milk is heated to 35-42ºC, inoculated with a small portion of matsoni, then allowed to culture overnight. Drained of its whey and chilled, matsoni thickens to a yogurt consistency. Undrained and unset matsoni makes a popular beverage in the region; drizzled with honey and topped with fruit, matsoni is a popular breakfast fare. It is also a key ingredient in several popular Caucasian meat and vegetable dishes, where it is often juxtaposed with something spicy — a classic pairing that recalls the strong Zoroastrian and Persian influence on Caucasian cuisine. But my current obsession — and what I will make from that vast vat of matsoni — is a hot soup, popular in all three Caucasian nations.

I was first introduced to hot matsoni-based soup in Georgia during a golden autumn where the nights had only a hint of chill and the days were hot and bright — perfect weather for picking grapes and celebrating the harvest in an expansive outdoor supra or banquet. I have since tried to pinpoint an original recipe, but there are more versions of this soup in the Caucasus than I’ve had khachapuri. Armenians call it “spas” or “kyalagyosh” and the Georgians call it “tsivi matsvinis shechamdi,” or “dovga.” While the base of matsoni, flour, and egg tempered with hot stock is common to each, what goes into the soup is open to wide interpretation: there are excellent versions with lentils, wheat berries, barley, and even rice. Some lighter versions feature only chopped herbs and are administered to anyone who is under the weather.

My favorite version, however, features small meatballs, seasoned with the region’s favorite flavor notes of coriander, sumac, and cumin, and finished with a generous handful of fresh herbs, including mint. The meatballs make a wonderful contrast to the silky smoothness of the matsoni and egg broth.

The quest for the original recipe will probably last a lifetime, but in the meantime, why not inaugurate soup season with the recipe below, which makes a filling and healthy dish for lunch or dinner? You can dial up the heat on the recipe by using a heavy hand with the final garnish of red pepper, or simply leave it as it is: tangy, delicious, and possibly life-extending. Who knew the fountain of youth flowed with fermented dairy from the Caucasus?