President Recep Tayyip Erdogan has declared that Turkey would not allow the United States to delay its plan to set up a “safe zone” in northeast Syria, while insisting that the deal he reached with Washington was still the correct step to take. 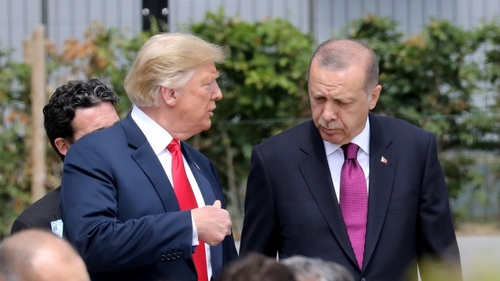 On Thursday, Erdogan spoke to Trump on the phone about the latest developments in Syria File: Ludovic Marin/Reuters

Erdogan was quoted in a CNN Turk report published on Thursday as saying that Ankara would not accept delays in the plan, comparing it to an earlier deal with Washington to remove the Kurdish YPG fighters from the northern Syrian city of Manbij, which Turkey had accused the US of delaying.

“We will never tolerate a delay like we saw in Manbij. The process must advance rapidly,” Erdogan said.

In a statement, Turkey’s presidential communications directorate also said that Erdogan spoke to US President Donald Trump early on Thursday about the latest developments in Syria’s Idlib province.

Ankara revealed last weekend that a joint-operations centre for the proposed zone along Syria’s northeast border was now fully operational.

Washington and Ankara have been at odds over plans for the region, where the Kurdish YPG militia form the main part of a US-backed force fighting the Islamic State of Iraq and the Levant (ISIL, also known as ISIS).

“The agreement which we have reached with the USA is a correct step towards establishing a safe zone and removing the YPG from the east of the Euphrates (river),” Erdogan told reporters on his way back from meeting Russian President Vladimir Putin in Moscow.

The safe zone was proposed last year by Trump, who had announced plans to withdraw US special forces from northern Syria, but later suspended the plan to ensure Washington’s Kurdish allies would be protected.

Erdogan said this week Turkish ground troops would enter the planned safe zone “very soon”, having warned previously that Turkey would mount a cross-border offensive on its own to clear the YPG militia from its border if necessary.

“All the personnel, the armoured carriers, all are on the border. That is, we are in a position to do everything at any moment,” Erdogan was quoted as saying.

On Tuesday, an official in a YPG-led alliance said that the YPG would pull forces and heavy weapons from a strip along Syria’s border with Turkey under US-Turkish deals.

The YPG withdrew from the Tal Abyad and Ras al-Ain border positions in recent days, proving it was serious about the ongoing talks, the Kurdish-led authority in north and east Syria said.

US support for the YPG has enraged Turkey, which views the armed rebel group as a “terrorist” organisation linked to Kurdish groups fighting for independence inside the country.

The two countries have also fallen out over Turkey’s purchase of Russian S-400 missile defence systems, prompting Washington to begin removing Turkey from its programme for manufacturing F-35 jets, which Turkey also planned to buy.

Erdogan visited an aviation fair with Putin during his visit to Moscow.

Asked whether Russia’s Sukhoi Su-57 stealth fighter jet and Su-35 aircraft could be among alternatives to the F-35s, Erdogan said: “Why not? We didn’t come here for nothing.”

The RIA news agency cited a Russian official as saying on Wednesday that the two countries are discussing the possibility of deliveries of the two aircraft to Turkey.

How a red dot symbolised Kashmiri resistance against India’s move