Amnesty International named five new prisoners of conscience in Cuba on Monday and said their detention underscored how the presidential handover last year from Raul Castro had not changed the Communist-run country’s repressive tactics. 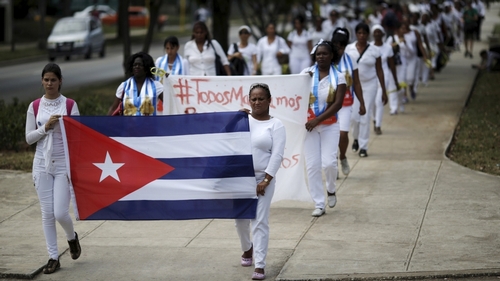 Members of the ‘Ladies in White’ dissident group march in Havana in 2016 File: Ueslei Marcelino/Reuters

Amnesty said there were likely many more Cubans who had been imprisoned for peacefully expressing their views whose cases it was a challenge to document because authorities deny access to international rights groups.

All of the prisoners it listed were associated with opposition organisations in the one-party state.

Cuban authorities do not comment on police activity such as the detention of dissidents, who have limited support inside the island, and dismisses them as a tiny minority of provocateurs financed by the United States to subvert the government.

“For decades, Cuba has stifled freedom of expression and assembly by locking up people for their beliefs and opposition to the government,” said Erika Guevara-Rosas, Americas director at Amnesty International.

“Over the years, the names of Cuba’s prisoners of conscience have changed, but the state’s tactics have stayed almost exactly the same,” she added.

Many Cuban activists and independent journalists are complaining of growing harassment.

They say that is a sign the government is nervous because the launch of mobile internet last December has given them more of a public platform and ability to mobilise at a time of heightened political and economic tension.

Cuba, which was already struggling with a decline in Venezuelan aid in recent years, is facing more hostility and sanctions from its longtime foe, the US.

Cuba has also undergone a leadership transition, with Castro handing the presidency over last year to his right-hand man, Miguel Diaz-Canel.

On Monday, the head of Cuba’s largest opposition group, the Patriotic Union of Cuba (UNPACU), Jose Daniel Ferrer, said on Twitter that security forces had detained 15 activists and prevented dozens of others from reaching their local headquarters in order to prevent activities to celebrate the group’s eighth anniversary.

The Madrid-based non-governmental rights group Cuban Prisoners Defenders, which has links to UNPACU, estimates there are at least 70 political prisoners on the island.

Amnesty said it updated its own list after reviewing some of those cases.

All of the prisoners Amnesty listed on Tuesday were men who had been jailed since 2015 and sentenced to one to five years of prison for “public disorder,” “contempt” or “dangerousness.”

On This Day in April: 30 of the Month’s Biggest Moments

The latter two charges are inconsistent with international law, it said.

“Dangerousness” – the possibility someone could eventually commit a crime – is a catch-all word used against anyone authorities do not like, critics say.

Two of the five prisoners had been badly beaten by prison officials, Amnesty cited their relatives as saying.