The brother of Afghan Taliban leader Haibatullah Akhunzada has been killed in a powerful bomb blast at a mosque in southwestern Pakistan, Taliban sources have confirmed. 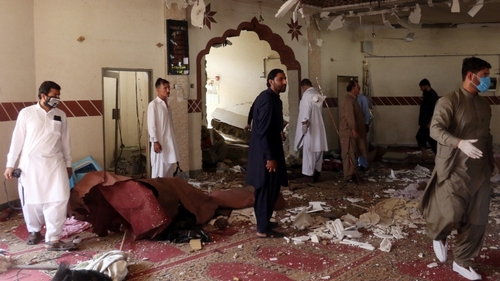 The imam of the mosque, 25km from the southwestern city of Quetta, was among those killed, police said Reuters

A senior Taliban source said that Hafiz Ahmadullah was the imam of the Khair Ul Madarais mosque in the town of Kuchlak, on the outskirts of Quetta, that came under attack during Friday prayers.

At least four people were killed in the bomb explosion, according to police.

“It is true that the brother of Akhunzada, Hafiz Ahmadullah, has been killed in the explosion,” the source told Al Jazeera, adding that two of Haibatullah’s nephews were also wounded in the blast.

A council of Taliban leaders called the Quetta Shura took refuge in Quetta, the capital of Balochista province near the Pakistan-Afghanistan border, after the group was overthrown by United States-led forces in 2001, five years after seizing power.

“This mosque was a place where most of the Taliban members used to meet and discuss issues,” another Taliban source told Al Jazeera.

“The duties of the mosque were handed over to Ahmadullah by Haibatullah after he was appointed as the emir of the Taliban group in 2016.”

Haibatullah, in his late 50s and originally from Kandahar province, fought against the Russians during the 1980s and then joined the Taliban movement in 1994 under the leadership of late Taliban leader Mullah Omar, who established strict Islamic law in Afghanistan.

Earlier on Friday, Pakistani police confirmed to reporters that the imam of the mosque was killed in the explosion.

No group has claimed responsibility for the attack.

This comes just days after Taliban representatives and US officials ended their eighth round of negotiations in the Qatari capital, Doha.

Since last year, the two sides have held discussions over a potential peace agreement that is focused on four key issues: a Taliban guarantee that it will not allow foreign armed groups and fighters to use Afghanistan as a launchpad to conduct attacks outside the country; the complete withdrawal of US and NATO forces; an intra-Afghan dialogue; and a permanent ceasefire.

The Taliban has long demanded a complete withdrawal of foreign troops in order to “end the occupation” in Afghanistan.

About 14,000 US troops and around 17,000 troops from 39 NATO allies and partner countries are in Afghanistan in a non-combative role.

The world has tuned out, but hope still exists