Japanese Prime Minister Shinzo Abe has skipped a visit to the controversial Yasukuni shrine for war dead, but sent a ritual offering on the 74th anniversary of Japan’s World War II surrender, a gesture likely to be criticised by Asian neighbours. 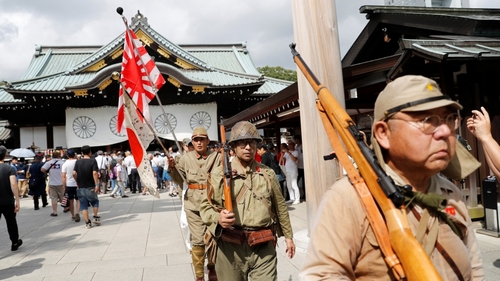 A spokeswoman for the shrine could not immediately confirm the offering.

Past visits by Japanese leaders to Yasukuni have outraged South Korea and China because the shrine honours 14 Japanese wartime leaders convicted as war criminals.

Protests from Seoul could be especially strong this year because bilateral relations are at their lowest level in years after a series of disputes.

Abe has only visited the shrine in person once since taking office in 2012, but has regularly sent offerings on August 15 and during the shrine’s spring and autumn festivals.

China’s relations with Japan have long been haunted by what Beijing sees as Tokyo’s failure to atone for its occupation of parts of China before and during World War II, while bitter memories of Japan’s 1910-45 colonisation of Korea remain.

Relations between Tokyo and Seoul have also deteriorated in recent weeks after a ruling by South Korea’s Supreme Court last year that Japanese companies should compensate South Koreans conscripted as forced labourers during World War II.

Tokyo says the matter was settled by a 1965 treaty normalising ties.

The two nations this month ended each others’ fast-track trade status and Tokyo on Tuesday urged caution for travellers to South Korea before crucial anniversaries this week.

South Korea celebrates August 15 as a national day of liberation from Japanese rule.

Later on Thursday, a candlelight vigil will be held in the South Korean capital denouncing the Japanese prime minister’s recent trade decisions.

More than two million Zimbabweans on the brink of starvation

Srinagar a maze of razor wires and steel barriers