Srinagar, Indian-Administered Kashmir – After August 5, when India revoked Kashmir’s special status and followed the move with a military lockdown, Uzma Javed did not leave her house for days.

Every few hours, she looked out of the window from her family’s two-storey house in Srinagar, the largest city in Indian-Administered Kashmir.

A 20-year-old student who usually lives in Kerala, Javed had returned home to spend Eid with her relatives.

But instead of celebrating, she found herself caged in while outside, armed Indian paramilitary forces manned largely empty streets.

A few civilians negotiated with troops to allow them to cross razor wire coils laid across the road.

“At present everyone in Kashmir is being immensely subjugated. But women are the biggest victims of this inhumane siege,” she told Al Jazeera.

Javed was particularly worried about a female friend who lives close by, who she had not heard from in over a week.

“I don’t know how Munaza is doing. The men somehow manage to sneak out for prayers … We can’t even do that.”

The sight of armed forces “petrifies me”, she said, adding: “I don’t even want my brother and father to go out at all but there is no option. They need to go to get bread and other daily necessities.”

She was alone with her mother, concerned that her brother and father were among the protesters.

When they returned home later that night, Javed had to go to hospital – her blood pressure had shot up.

We feel persecuted, even more than the men of the valley today.

Article 370 of the Indian constitution had granted autonomy to the region. After it was revoked, India put Kashmir under a complete military lockdown.

Phone and internet lines were shut off, leaving more than seven million people in the region unable to contact the outside world. India has said that communications have now been partially restored.

Before announcing the decision, one of the government’s arguments for scrapping Article 370 was that it would lead to gender equality and the “emancipation” of women in the Muslim-majority region.

On August 10, Manohar Lal Khattar, chief minister of Haryana, was quoted as saying: “Some people are now saying that as Kashmir is open, brides will be brought from there. But jokes apart, if the gender ratio is improved, then there will be a right balance in society.”

Earlier, the BJP’s Vikram Saini, a Member of the Legislative Assembly, said: “Muslim party workers should rejoice in the new provisions. They can now marry the white-skinned women of Kashmir.”

Nivedita Menon, a professor at Jawaharlal Nehru University in New Delhi, said: “These are proclamations of conquest and plunder, and reveal the real intention behind the abrogation of 370.” 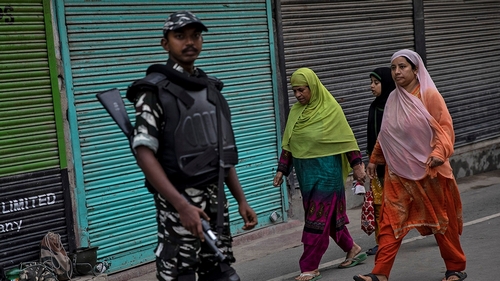 And according to reports, “How to marry Kashmir women” was increasingly Googled after August 5.

“The way women of Kashmir are exoticised and objectified on a daily basis in India, the way their bodies are portrayed as vulnerable and used to create fear and intimidation, has heightened the sense of being preyed upon,” said Samreen, a 22-year-old make-up artist from Srinagar.

“We feel persecuted, even more than the men of the valley today.”

With communications lines shut off, Samreen was unable to contact her sister in New Delhi.

“I wanted to book a ticket to just see if she is okay. We can’t even do that,” she said.

To book a flight, she would have to go to the airport, some 20 kilometres away.

“My mother has been worried sick,” she said, adding she had attempted to get to the airport on a scooter with her father but the presence of Indian security forces prevented her.

Misbah Rehsi, a 22-year-old Srinagar resident, was unsurprised at the growing sexism, explaining that the BJP’s attempt to position itself as a “saviour” for Muslim women is not genuine.

“I hope the people of India are able to comprehend the misogyny that runs in the party and see how there isn’t actually any intention of protecting and saving Kashmiri women,” she said.

It’s of course communal and hate-filled. But in the larger context, it plays with the ideas of taking vengeance of what happened 500 years ago under Muslim rule in India, irrespective of the fact that half of it is just lies.

Systematic sexual abuse and other forms of gender-based violence are often deployed as weapons in war.

Kavita Krishnan, a member of the Communist Party of India (CPIM), took activists from India to Kashmir after August 5.

She said women and girls were anxious given the increased paramilitary and military presence.

“They told us they had found it extremely difficult between August 5 and 9 to even get milk and vegetables for their kids, due to the total curfew. They were also deeply distressed at the widespread illegal detention of children as young as nine or 10 years old, and teenagers.”

Krishnan added that some of the women and girls also spoke of their fears of “being molested during such raids”.

Indian forces have previously been accused of sexual assault in Kashmir.

On February 23, 1991, as India carried out a large military operation, soldiers allegedly raped more than 30 women in two villages, Kunan and Poshpora, in the Kupwara district The Indian Army has always denied the allegations.

But in a July report, the UN said: “There has been no progress in the Kunan Poshpora mass-rape case from 1991, and authorities continue to thwart attempts of the survivors to get justice.”

It also called on India to “investigate and prosecute all cases of sexual violence allegedly perpetrated by state and non-state actors, and provide reparations to victims”. 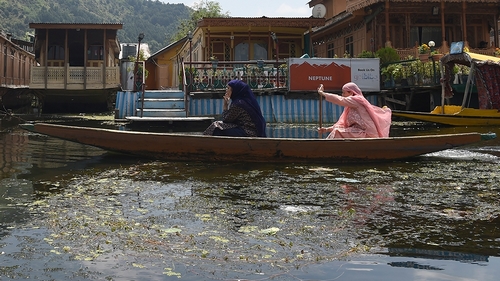 As tensions prevailed in Kashmir, with continued protests and wide-scale arrests amid the clampdown, Janees Lanker, a 22-year-old Masters student from Srinagar, reflected on the roots of misogyny.

As well as blaming the political class for encouraging sexist attitudes, she also pointed to the portrayal of Kashmiri women in Indian cinema.

“Kashmiri women are shown as these innocent, naive, dolled up beings,” she said, “which is nothing less than objectifying them.”

Her social media feeds, she said, are peppered with memes showing “fair girls with a hijab” as objects of sexual desire, “and it’s disgusting.”

Delhi-based historian Irfan Habib believes the language emanating from some sections of the BJP is being used to whip up support among the party’s majority Hindu base.

“It’s of course communal and hate-filled,” he told Al Jazeera. “But in the larger context, it plays with the ideas of taking vengeance of what happened 500 years ago under Muslim rule in India, irrespective of the fact that half of it is just lies.”