Thousands of Rohingya refugees marked the second anniversary of their exodus into Bangladesh by rallying and praying as they demanded Myanmar grant them citizenship and other rights before they agree to return. 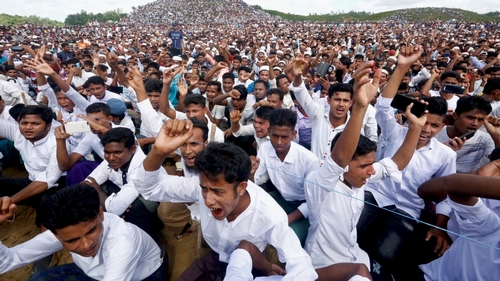 Rohingya refugees gather to mark the second anniversary of the exodus at the Kutupalong camp in Cox’s Bazar, Bangladesh Rafiqur Rahman/Reuters

Children, hijab-wearing women, and men in long-skirt lungis shouted: “God is great, long live Rohingya” as they marched at the heart of the world’s largest refugee camp to commemorate what they described as a “Genocide Day”.

Sunday’s rally came days after a second failed attempt to repatriate the refugees, which saw not a single Rohingya turn up to return across the border.

“We want to tell the world that we want our rights back, we want citizenship, we want our homes and land back,” Muhib Ullah, one of the organisers of Sunday’s protest, told the Associated Press news agency. “Myanmar is our country. We are Rohingya.”

“I have come here to seek justice for the murder of my two sons. I will continue to seek justice till my last breath,” 50-year-old Tayaba Khatun told AFP news agency as tears rolled down her cheeks.

On Saturday, Bangladesh police said they shot dead two refugees during a gunfight in a camp after the pair were accused of killing a ruling party official.

The Rohingya, a mainly Muslim minority, are not recognised as an ethnic group in Myanmar, despite having lived there for generations. They have been denied citizenship and are rendered stateless.

Bangladesh and Myanmar signed a repatriation deal in November 2017, with a plan to return the refugees within two years.

Bangladesh, with the help of the UN refugee agency, attempted to start the repatriation of 3,450 Rohingya on Thursday for second time after the last attempt in November, but none agreed to go back voluntarily.

“They asked if we wanted to go back to Myanmar, I said no. They asked me why. I told them that our homes were burned, our family members were raped and killed. This is why we suffered to come here. How can we go back without knowing that we will be safe?” Noor Hossain told Al Jazeera.

Rohingya leader Mohib Ullah said the stateless minority wanted to return home, but only after they were granted citizenship, their security was ensured and they were allowed to settle back in their villages.

“We have asked the Burmese government for dialogue. But we haven’t got any response from them yet,” Ullah told the rally.

Al Jazeera’s Stefanie Dekker, reporting from the Kutupalong refugee camp, said many are “terrified and traumatised” to go back.

“There are reports that most of the homes of these people have been razed to the ground by the authorities, that other structures have been put up in their place, so where will they be going back to?” she said.

“These are the issues that haven’t been addressed and I think many people tell you realistically that this is going to be long-term problem for Bangladesh and potentially the region.”

A UN-established investigation last year recommended the prosecution of Myanmar’s top military commanders on charges of genocide, war crimes and crimes against humanity for the crackdown on the Rohingya.

On Thursday, the UN Independent International Fact-Finding Mission on Myanmar released a new report concluding that rapes of Rohingya women by Myanmar’s security forces were systemic and demonstrated the intent to commit genocide.

The report said the discrimination Myanmar practiced against the Rohingya in peacetime aggravated the sexual violence towards them during times of conflict.

The UN has called the Rohingya crisis a “textbook example of ethnic cleansing”.