Negombo, Sri Lanka – Katuwapitiya, a grief-stricken Sri Lankan village of 600 families, is in the coastal city of Negombo, about 30 kilometres north of Colombo.

On April 21, 149 Katuwapitiya residents died inside its St Sebastian’s Church, according to a recent count by community members, during the Easter Sunday massacre, claimed by the Islamic State of Iraq and the Levant (ISIL or ISIS) group.

Almost four months have passed since the attack, which targeted three churches and three top-end hotels, killing at least 253 people and injured 500 – the bloodiest outbreak of violence to hit Sri Lanka since the end of the 26-year civil war in 2009.

Sister Noel Christine had rushed to the scene at St Sebastian’s Church that day to find chaos.

Now, she steps out of a white minivan in Katuwapitiya wearing immaculate blue habits to greet an armed Sri Lankan soldier on guard at the gate of the reopened church.

She is 69 years old and has arrived to gather for mass, hosted by Sri Lanka’s Catholic Cardinal Malcolm Ranjith.

A large red cross hangs over the entrance to the church, one of the few items that remained unscathed after the bombing. 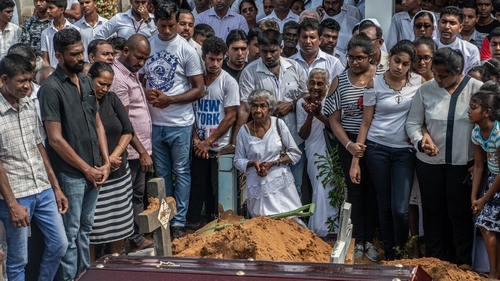 People attend the funeral of a husband and wife who were killed in the Easter Sunday attack on St Sebastian’s Church, on April 25, 2019, in Negombo, Sri Lanka File: Carl Court/Getty Images

In the aftermath of the attacks, Sri Lankan authorities have used counterterror laws to arbitrarily arrest and detain Muslims. Threats of violence forced refugees from Pakistan and Afghanistan to seek shelter at police stations and mosques in Negombo.

In the hours after the violence, Cardinal Ranjith advised Catholics to remain calm and warned them against seeking retribution.

But as they reflect on the period since the massacre, it appears that the Cardinal is not the reconciliatory figure he posed to be.

On June 3, he visited a Buddhist monk in the central city of Kandy who was on a hunger strike for the removal all Muslim ministers in the government. They all resigned promptly.

On July 21, at the commemoration of the bombing at St Sebastian’s Church in Katuwapitiya, the cardinal told congregants: “The current leaders have failed. They have no backbone. They must leave the government and go home.”

The church has to tolerate me. I’m almost seventy. In Negombo, we have come together as a united group. This will make it easier to reconcile while many are still dividing Sri Lanka.

“It was a sad event. So many of our people have lost their loved ones. But the real tragedy is the way victims have been treated,” said Sister Christine, who provides psychosocial and financial support to Katuwapitiya families. “I’ve been seeing to their needs and many of them don’t want to hear the Cardinal talking politics.”

Sister Christine’s acquaintance in the diocese, Father Sarath Iddamalgoda, told Al Jazeera that some clergymen close to the Cardinal have ordered their congregants to distance themselves from the Muslim community. One allegedly went as far as telling Catholics to start rearing pigs.

“As clergymen or women we have one calling, and that’s to stand for justice. In the case of Sri Lanka we have to support minority rights,” Father Sarath Iddamalgoda said. “Unfortunately our church doesn’t do this nationally. But I’m happy we have sister Christine doing it for us.”

As well as supporting attack survivors and victims’ families, Sister Christine now spends some of her time trying to heal divisions stoked by Sri Lanka’s religious and political leaders.

As well as talking to members of her own Catholic community in Katuwapitiya, she holds discussions with Buddhists, Muslims and other Christian groups.

“We are calling for justice for the victims of the bomb blasts, but the government isn’t doing anything to help them. These people need to be taken care of. The government still has no plan of action,” she said. 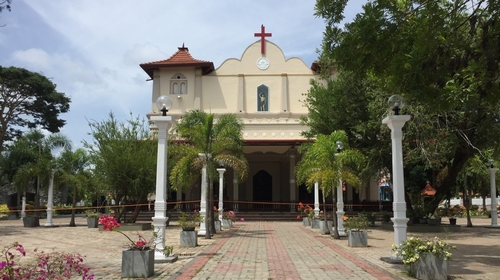 The prime minister’s office has set up the Office of Reparation to compensate victims’ families. It has compensated them 283.3 million Sri Lankan Rupees ($106m) – one million ($5,650) to each of the 189 families who have made claims.

But Sister Christine said she is aware of cases where families feel forgotten.

“I visited one home where the lady died, and her husband and two children were now without a wife and mother. They had all lived in a small one-bedroom house,” Sister Christine said. “They told me that it was sad a bomb had to destroy the community for the world to know how poor their family is.”

Sister Christine relives the Easter Sunday carnage almost every morning. For two weeks after witnessing the bloodshed, she helped victims in hospital.

‘I wanted to work for justice’

Over the last 40 years, Sister Christine has built trust with every family in Katuwapitiya.

After the attacks, she heard that Muslim refugees from Pakistan, living in Negombo, faced the threat of “retaliatory” attacks and had to be relocated from their homes to local police stations for protection.

She mobilised her network to preach peace.

“We formed Negombo United People’s Alliance. We want Negombo to be safe,” she said. “We have to be good neighbours. If there is a problem arising in a shop or in the streets, we get a call and we go there to stop violence from spreading.”

But she said she now faces discrimination from local Muslims – who also faced threats of violence and arbitrary arrests.

Some Sri Lankan Muslims have refused to assist her, or even serve her in their shops or restaurants, because they disagree with her helping the Pakistani refugees – the majority of whom are Ahmadi Muslim, a persecuted religious minority.

“Some Muslims that we work with believe the Ahmadis are from a lower caste. But there are also certain Catholic nuns and priests who don’t agree with us giving support to any Muslims,” Sister Christine said. “The Pope says we have to be a contradiction to the world of injustice.”

Born into a poor family in the southern city of Galle, Sister Christine’s dream was to become a flight attendant until she met an Irish nun who changed her outlook on life.

She said her life’s work began when a young girl she loved and cared for died.

“I looked after homeless children. After this, I realised I wanted to work for justice,” she said, adding that she has faced a backlash for her activism.

A parliamentary select committee is investigating whether this instability in government contributed to a failure to take warnings of an attack seriously.

“A group of us came together to form an alternative women’s platform. We called it the Fifty Two Per Cent Force. Because we’re 52 percent of the voting population and we are only 4.5 percent in the parliament,” said Shreen Saroor, a Sri Lankan human rights activist.

“Sister Christine hasn’t only just been doing charity work, she’s also working on feminist issues and how to create an alternative way of questioning our political leaders.”

Back in Negombo, Father Sarath Iddamalgoda reflects on his 40 years of community outreach work alongside Sister Christine. The two have fought on behalf of the homeless and impoverished fishermen’s families in Negombo.

They have also been fighting for accountability – not just for the victims of the Easter Sunday attacks but for all of those whose voices are being ignored by religious and political leaders.

“I don’t think she’s ever taken a holiday in her lifetime,” he said. 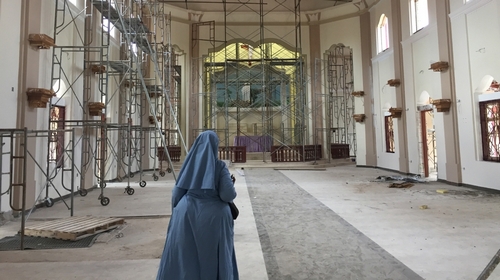 “The kind of work she does can cause psychological harm. Every person has a limit to the suffering they can internalise. I always tell her she needs a holiday.”

Sister Christine climbs back into the passenger seat of her white minivan for the drive south from Negombo to Colombo. Her habits have a thin coat of dust from spending the day outdoors.

She credits the younger Catholic nuns and interfaith activists for giving her the energy to continue.

“The church has to tolerate me. I’m almost 70,” Sister Christine said. “In Negombo, we have come together as a united group. This will make it easier to reconcile while many are still dividing Sri Lanka.”

Deadly Hurricane Dorian batters the Bahamas, edges closer to US