The music videos began appearing on social media within hours of the announcement by India’s Hindu-led nationalist government that it was stripping statehood from the disputed region of Kashmir that had been in place for decades. 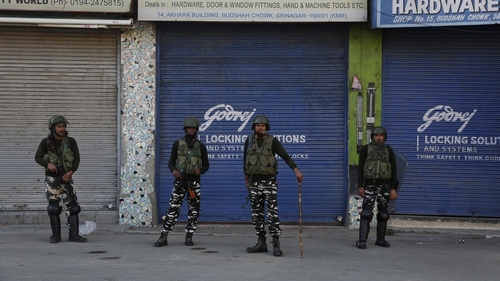 The songs delivered a message to India’s 250 million YouTube users about moving to the Muslim-majority region, buying land there and marrying Kashmiri women.

It is the latest example of a growing genre in India known as “patriotism pop” – songs flooding social media about nationalism and the country’s burgeoning right-wing ideology.

Earlier songs were limited to the rise of Hindus in India, defeating regional rival Pakistan and hoisting the Indian flag in every household. Now, they include settling in Kashmir – a rugged and beautiful Himalayan region claimed by both Pakistan and India, although both countries control only a portion of it.

On August 5, Indian Prime Minister Narendra Modi revoked Kashmir’s decades-old special status that was guaranteed under Article 370 of India’s constitution and sent thousands of troops to the region. The move has touched off anger in the Indian-controlled region, which has been under a security lockdown that has seen thousands detained to prevent protests there.

One of Modi’s revisions allows anyone to buy land in the territory, which some Kashmiris fear could mean an influx of Hindus who would change the region’s culture and demographics. Critics have likened it to Israeli settlements in Palestinian territories.

The patriotic songs are mostly shared on platforms like Facebook, Twitter and the fast-growing app TikTok, which in June had about 120 million active users in India. Despite their low production values, poorly matched lip-synching and repetitive techno beat, many of these soundtracks have gotten millions of hits on YouTube.

The songs are a hit among youthful followers in northern and eastern parts of India, and their creators do not seem to be stopping anytime soon.

A service for the nation?

Nitesh Singh Nirmal identifies himself as a producer, songwriter and composer for his Rang Music studios in the eastern state of Bihar. A Modi admirer, Nirmal claims to be the first to produce a soundtrack on the revocation of Kashmir’s statehood, completing it in three hours.

The song, Dhara 370, or Article 370, starts with visuals of an Indian flag fluttering atop New Delhi’s famous Red Fort, followed by old footage of Modi from a previous Independence Day ceremony.

The singer thanks Modi and his government for keeping his promise to remove Article 370 from the constitution. The video then cuts to the map of Kashmir, along with words that roughly translate to how Pakistan has lost to India.

The song has gotten more than 1.6m hits on YouTube since it was posted there by Nirmal, who has no musical background. He said he only found his calling when Modi’s Bharatiya Janata Party resoundingly won the 2014 election.

That’s when Nirmal thought he could write songs about nationalism.

“I am doing service for the nation. People dance to these songs,” he says.

Nirmal’s claims about their popularity are not far-fetched. TikTok, which lets the user lip-synch to music and make short vines, is flooded with images of Hindu nationalists declaring plans to go to Kashmir and marry women there. Most of the videos have music similar to the kind produced by Nirmal.

In April, TikTok was removed from Android and iPhone app stores after an Indian court ruled it was “encouraging pornography.”

The rising appeal for songs that promote nationalism and talk about reclaiming Kashmir have paved the way for lesser-known artists to join in.

Salman Siddiqui, who is in his twenties and studies science in the state of Uttar Pradesh, wanted to showcase his musical writing prowess and contacted Nirmal. They collaborated on a song about a man who is seeking a Kashmiri bride and wants to be the first to have a wedding procession that travels from India to the region.

Nirmal and Siddiqui insist the songs are not sexist.

“It’s the desire of a young man’s heart to marry a Kashmiri woman,” Siddiqui says.

The idea was boosted August 6 by lawmaker Vikram Saini, who told members of his Bharatiya Janata Party “eager to get married” to go to Kashmir, adding that his party has “no problem with it.”

Critics say the idea of marrying Kashmiri women to “reclaim” the region is rooted in a patriarchy that objectifies and dehumanises Kashmiris.

Political anthropologist Ather Zia calls this a “fetishisation in the Indian imagination.”

Such songs are a “culmination of a toxic misogynistic nationalist thinking that draws validation from humiliating Kashmiri women”, Zia said.

“The Indian media – from news to entertainment – has left no stone unturned in portraying Kashmiri women in the racist trope of ‘coveted fair-skinned ones’ and at the same time being helpless and needing saving from their own men – all this while demonizing Kashmiri men,” she said.

While some artists oppose writing such songs, they say the audience demand is strong.

Singer Nardev Bainiwal, who lives in Haryana state and owns the Jawan Music Co., has a song on Kashmir that got 1.9m hits on YouTube.

“We write songs about things people want,” Bainiwal says, noting his main audience is from smaller cities and towns in northern India where internet penetration has picked up in recent years.

Google Trends has shown an increase in Indians using search terms like “marry Kashmiri girl” and “buy land in Kashmir.”

“I am personally against such declarations, but if we don’t make these songs, someone else will and we will lose out on money,” Bainiwal says.

Nirmal says that since he published his song on August 5, he has earned nearly $100 for work that cost him about $20 to produce.

He says the key is to keep abreast of the news and gauge the public mood. He has songs ready if India’s Supreme Court allows a Hindu temple to be built on a site where hard-liners in 1992 attacked and demolished a 16th century mosque, sparking deadly Hindu-Muslim violence.

“Songs about building of the temple could be my next hit,” he says.

Apart from the online revenue, the artists also perform concerts. Nirmal has had 10 shows in the last two weeks.

“The business”, Nirmal says, “is booming”.