Doha, Qatar – Two-day peace talks, attended by Afghan delegates and Taliban representatives in the Qatari capital of Doha, have ended with both sides calling to reduce civilian casualties to “zero” amid the rising death toll in the war-torn country.

The so-called intra-Afghan dialogue, sponsored by Qatar and Germany, between Afghan politicians, civil society members, including women, and the Taliban is seen as a substantive step towards peace in Afghanistan.

“… Committed to respect and protect the dignity of people, their life and property and to minimise the civilian casualties to zero,” a joint statement released at the end of the talks in Doha said late on Monday.

We have all agreed to the fact that the civilians should not be affected, war continues, but our aim is to reduce civilian casualties to zero

Qari Din Mohammad Hanif, a member of the Taliban delegation

The statement also pledged to guarantee the security of public institutions.

“Ensuring the security of public institutions, such as schools, religious madrassas, hospitals, markets, water dams and other working locations,” the statement said.

Qari Din Mohammad Hanif, a member of the Taliban delegation, said the group of Afghan delegates which also included members from the Afghan government, was on the same page on civilian casualties.

“Afghan people will be protected, we have always wanted this, they are never the target,” he told Al Jazeera.

“We have all agreed to the fact that the civilians should not be affected, war continues, but our aim is to reduce civilian casualties to zero.”

The assurances came a day after at least 18 people were killed and more than 180 wounded, including scores of children, in a car bomb attack claimed by the Taliban which has been running a bloody armed rebellion since it was removed from power in 2001. 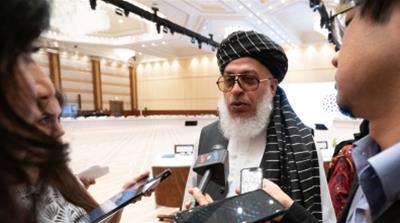 The so-called intra-Afghan meetings, which follow six days of direct United States-Taliban talks, also in Doha, saw the participation of about 50 Afghan politicians and activists, including 10 female delegates.

The gathering was organised in a bid to initiate direct dialogue between the rival sides that have been at constant war with each other since the US-led invasion in the wake of September 11, 2001 attacks in the US.

The talks were also aimed at sustaining peace after the expected withdrawal of US-led NATO troops.

US special envoy for Afghanistan, Zalmay Khalilzad, has held several rounds of talks with the Taliban in Doha to ink a peace deal with the armed group, which wields considerable influence in the country.

The Taliban, which has repeatedly refused to negotiate with the Western-backed Kabul government, agreed to join the meeting on the condition that the attendees do so in a personal capacity.

The armed group consider Afghan President Ashraf Ghani’s administration a puppet regime, which has also been excluded from the direct US-Taliban talks. 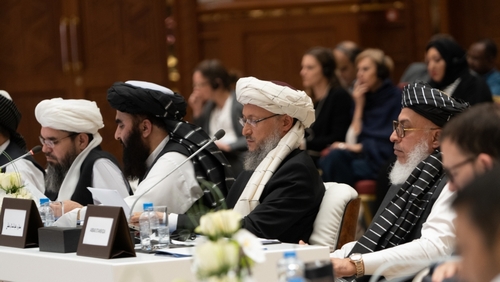 The so-called intra-Afghan dialogue is seen as a substantive step towards peace in Afghanistan. Sorin Furcoi/Al Jazeera

Following the press briefing on Monday, several delegates and diplomats differed on details of the joint statement.

Some said the statement was not an agreement but recommendations for peace, while others said it is “a call for peace and stability” or “a road map for peace”.

It is a first step in the right direction in reducing hostilities and an important one. This was more than what I expected from these talks

“We can’t call it a peace agreement, it is just a call for reduction of civilian casualties and protection of public places and institutions,” Anwar-ul-haq Ahadi, a former minister of finance, told Al Jazeera.

“It is a first step in the right direction in reducing hostilities and an important one. This was more than what I expected from these talks.”

Markus Potzel, Germany’s Afghanistan envoy who co-hosted the talks with Qatar, said the joint statement contained an “appeal and promise to reduce violence in Afghanistan’.

Sher Mohammad Abbas Stanikzai, the Taliban’s chief negotiator, said it was a “conference where everybody was expressing his or her views regarding peace in Afghanistan”.

He defended Sunday’s car bomb attack in Ghazni saying it was a “fight for freedom” against “foreign occupation”.

“Our target is not civilians, those who were killed in the attack were intelligence forces, only nearby houses were affected by the blast which injured civilians.”

The US-Taliban talks are set to resume on Tuesday, which are aimed at hammering out details of a framework agreement reached in January.

The agreement includes a timeline for US troop withdrawal from Afghanistan, a ceasefire and a Taliban guarantee to not allow foreign forces to use the country as a staging ground for foreign attacks.

Iran hits back at US demands on ballistic missiles