Phnom Penh, Cambodia – The trial of two Cambodian journalists charged with espionage has begun in the capital, Phnom Penh, in a case human-rights groups say should never have been brought to court.

Former Radio Free Asia (RFA) reporters Uon Chhin and Yeang Sothearin were arrested in November 2017 after a late-night police raid on an apartment rented by the former. They were accused of supplying a foreign state with information, a charge that carries a prison sentence of between seven and 15 years.

RFA, which is funded by the government of the United States, had closed its operations in Cambodia shortly before the arrests. The outlet was known for its critical coverage of the Cambodian government, including frequent reports on corruption and illegal logging.

The men spent nine months in jail before being released on bail, but had their passports confiscated and were subjected to “court supervision”. In March, the investigating judges ruled that the case would go to trial.

Both Chhin and Sothearin admitted at Friday’s hearing that they had continued sending videos and information to RFA after it had shut down, but they denied that this constituted espionage.

“You know that you are not a journalist anymore, so why did you still send a report?” the prosecutor asked.

“I did it out of passion,” Chhin answered.

Two police officers who participated in the raid gave testimony at the hearing, with one saying the rental room was clearly for broadcasting because it was “on the seventh floor”.

In a strongly worded statement released the day before the trial, Human Rights Watch condemned the proceedings and urged Cambodian authorities “to drop the politically motivated case” against the reporters.

“The fabricated case against the ex-RFA journalists is intended as a strike against media that dares to criticise the Cambodian government,” Phil Robertson, deputy Asia director at Human Rights Watch said on Thursday, calling the espionage charges “bogus”.

Cambodian Prime Minister Hun Sen, who has been in power fore more than 30 years, has accused the US government of helping the country’s opposition plan a “colour revolution”.

In 2017, opposition leader Kem Sokha was arrested for treason and his party was dissolved, transforming Cambodia into a de facto one-party state just months before the following year’s national election.

The independent Cambodia Daily shut down after a dispute over alleged unpaid taxes, while the other leading newspaper, the Phnom Penh Post, was bought over by pro-government owners. Scores of independent radio stations were also closed.

Questions at the trial revolved around documents found on Chhin’s computers and phones, including text messages he had exchanged with a communications officer at the US embassy.

Chhin was asked if he had any connection to the US intelligence agency, the CIA.

“No I don’t know anyone, even the FBI I had to Google to find out what it is,” Chhin said, referring to the US Federal Bureau of Investigation.

Sothearin told the court he only went to the apartment because Chhin called him when the police arrived.

“I wanted to check on Chhin and to be a witness. I asked the authorities to let me in and when I got in they arrested me too,” Sothearin explained.

Chak Sopheap, director of the Cambodian Centre for Human Rights, told Al Jazeera by email that the trial had had a “chilling effect” on press freedom in the country.

“Journalists should be permitted to do their work, including exposing corruption, criticising public policies, and shedding light on human rights violations, in an environment that promotes their safety, without fear of negative repercussions,” she said.

In response to the increased repression, the European Union has warned Cambodia it may lose a preferential trade deal that helps support a garment industry that is a key pillar of the economy. 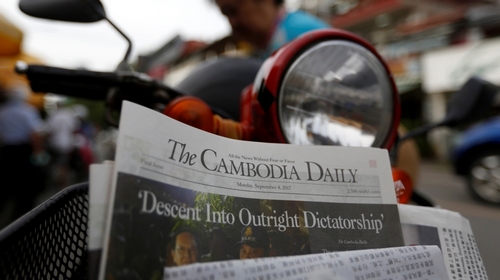 A woman buys the final issue of The Cambodia Daily newspaper at a store along a street in Phnom Penh on September 4, 2017. Samrang Pring/Reuters

Hun Sen has demonstrated a pattern in the past of ramping up political tension when his rule is threatened, and then easing the pressure to appease donor nations.

After his Cambodian People’s Party won all 125 National Assembly seats in the essentially unopposed election in July 2018, a slew of government critics were released from prison. Chhin and Sothearin were also freed on bail,  and the latter told Al Jazeera he had “expected” to be released after the polls, but was “still scared”.

But Hun Sen has since blasted the EU for holding Cambodia “hostage” and boasted that China would fill any gaps left behind by Western donors.

The crackdown meanwhile has resumed, with more politicians and activists arrested. Just this week, two self-employed Cambodian reporters were arrested for “inciting violence” while livestreaming a land dispute protest.

Sothearin told Al Jazeera of the “terrible” prison conditions, saying he occupied a cell with between 20 and 30 other prisoners.

“We lived in a tiny crowded space,” he said. “There was not good insulation. There was not enough water and the hygiene was terrible. We had skin disease like scabies.”

The United Nations-linked Working Group on Arbitrary Detention has found the detention of Chhin and Sothearin was arbitrary and “violated their right as journalists to freedom of expression”.

RFA also continues to defend its former employees, calling for the case to be dropped immediately.

“Former Radio Free Asia journalists Uon Chhin and Yeang Sothearin have already suffered nine months of imprisonment and now face unsubstantiated charges, which never should have been brought forward in the first place,” Rohit Mahajan, vice-president of communications, said in an email.

He added the situation could only be “rectified” by dismissing the case.

In the interview, Sothearin said he tried to think positively, but was “disappointed” that the court had decided to proceed with the trial.

He said his wife and children worried about him a lot.

“I hope that we will get justice and are exonerated,” he said. “There has not been any justice since we were arrested. Unless they give us back our freedom.”

The trial continues on August 9.