Under the auspices of a United Nations committee, representatives from Yemen’s government and Houthi rebels are scheduled to meet for a second day on Monday on board a ship to discuss a plan to pull out forces from the key port city of Hodeidah, as well as a ceasefire deal.

The meetings, which were last held in February, kicked off on Sunday at the Antarctic Dream vessel in the Red Sea, some 30km off Hodeidah on Yemen’s western coast.

The UN chartered the vessel as neutral territory between the two rival sides to hold the two-day meetings of the Redeployment Coordination Committee (RCC), which is led by former Danish Lieutenant General Michael Lollesgaard.

The government and the Houthis are tasked with withdrawing forces from Hodeidah as part of the ceasefire deal that was reached last December in Sweden’s capital, Stockholm.

On Sunday, Lollesgaard confirmed the meeting “onboard a UN vessel on the high seas”, adding it would centre on “steps to implement” the Hodeidah pullback plan.

The pullback was supposed to have taken place two weeks after the ceasefire went into force on December 18, but that deadline was missed.

In May, the UN announced the rebels had withdrawn from Hodeidah and two other nearby ports, the first practical step on the ground since the ceasefire deal.

But the government accused the militia of faking the pullout, saying it had merely handed control to its allies.

Lollesgaard confirmed in June there had been no Houthi military presence in all three ports since their withdrawal a month before. 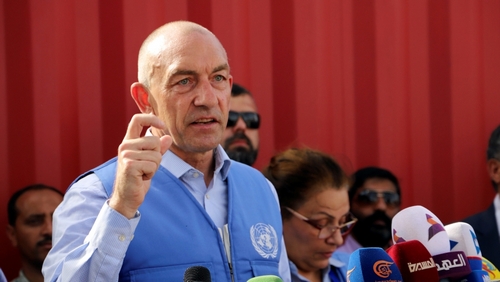 The UN is hoping that a de-escalation in Hodeidah will allow desperately-needed food and medical aid to reach millions in need in Yemen.

The Red Sea port is the entry point for the bulk of imported goods and relief aid to Yemen, which the UN has described as the world’s worst humanitarian crisis.

The conflict in Yemen broke out in late 2014 when Houthi rebels seized much of the country, including the capital, Sanaa.

Tens of thousands of people have been killed since the Saudi-UAE-led military coalition intervened in support of the beleaguered government in March 2015, according to the World Health Organization.

The fighting has also forced millions from their homes and left 24.1 million – more than two-thirds of the population – in need of aid.