Flights have resumed at the Libyan capital’s only functioning civilian airport after it was hit by forces loyal to renegade General Khalifa Haftar, amid rising tensions between the eastern-based commander and Turkey. 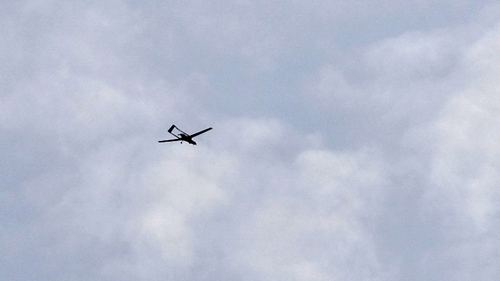 The forces of Khalifa Haftar said they destroyed a Turkish drone in a strike on an airport in Tripoli File: Ourfalian/AFP

Haftar’s self-styled Libyan National Army (LNA), which has been waging an armed campaign to seize Tripoli from the United Nations-recognised Government of National Accord (GNA), said on Sunday its air force destroyed a Turkish drone parked at Mitiga airport.

“Our fighter jets targeted and destroyed a Turkish Bayraktar aircraft as it was taking off,” the LNA said in a statement on Facebook. “The aircraft had been prepared to target our armed forces’ positions,” it said.

Earlier on Sunday, Turkey’s foreign ministry accused Haftar’s forces of arresting six of its citizens, and warned that the LNA would become a “legitimate target” if the Turks were not released immediately.

For its part, the LNA said it had arrested two Turks in the northeastern oil town of Ajdabiya.

Ankara has supplied drones and trucks to forces allied to the GNA, while Haftar’s GNA has received backing from the United Arab Emirates and Egypt, according to diplomats. Turkey says it is in Libya to support “regional peace and stability”.

The LNA launched an offensive on April 4 to capture the capital but it has been pushed back by the Tripoli government’s forces.

Pro-GNA fighters this week retook the strategic town of Gharyan, in a surprise attack and a major setback for Haftar.

Following the loss of Gharyan during a GNA operation he accused Ankara of backing, Haftar ordered his forces to target Turkish companies, ban flights and arrest Turkish nationals in Libya, his spokesman said on Friday.

Ankara has warned that it is ready to retaliate against attacks.

Haftar’s Tripoli offensive has upended UN-led plans to stabilise Libya after years of conflict that have left the oil-producing country divided and caused living standards to plummet.