Mahmoud Abbas, the president of the Palestinian Authority (PA), has announced the suspension of all agreements signed with Israel. 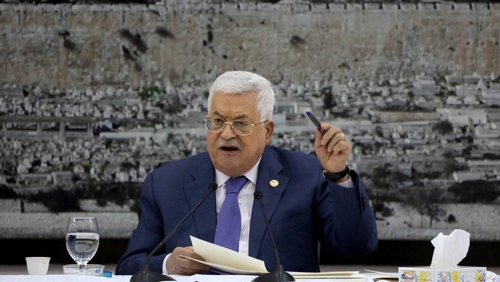 The 84-year-old’s declaration on Thursday came after an emergency meeting of the Palestine Liberation Organization in the wake of Israel’s demolition this week of several Palestinian buildings in Sur Baher village – a move Abbas described as an act of “ethnic cleansing”.

“We announce the leadership’s decision to stop implementing the agreements signed with the Israeli side,” Abbas said at speech in Ramallah, in the occupied West Bank.

He added that a committee would be set up in order to implement the decision but did not offer additional information.

“We will not bow to dictates and imposing a fait accompli by force in Jerusalem and elsewhere,” Abbas said.

Abbas said the move comes as Israeli authorities “ignore” all the signed agreements with the PA.

The two sides work together on matters ranging from water to security, and Abbas has made similar statements in the past but not implemented them.

Local media quoted Omar al-Ghoul, an adviser to Abbas, as saying that the Palestinian president’s statement “also includes security coordination”, but did not go into details.

On Monday, bulldozers accompanied by hundreds of Israeli soldiers moved into the village’s Wadi al-Hummus neighborhood and razed several buildings.

Israeli authorities claim that the buildings were constructed too close to its separation wall without a permit, but Palestinians say they had obtained the required licensing.

They also accuse Israel of using security as a pretext to force them out of the area as part of long-term efforts to expand Jewish settlements. All settlements on occupied Palestinian lands are illegal under international law.

“There is no peace, no security and no stability in our region and the whole world without our Palestinian people achieving their full rights,” Abbas said.

Abbas said that while he believes in a comprehensive, just and lasting peace, the Palestinian people will not accept the continuation of the Israeli occupation’s status quo, nor the so-called United States-backed “deal of the century” peace process.

In the meeting, Abbas also affirmed it was time to implement the Cairo 2017 agreement brokered by Egypt, referring to a reconciliation deal signed between Palestinian political parties Hamas and Fatah.

Hamas released a statement on Friday, supporting Abbas’s decision to suspend all agreements with Israel as a “step taken in the right direction”.

“The Palestinian people are looking forward to an urgent translation of these decisions into actions, it added.

Hamas also called for an immediate announcement on the formation of a national unity government, the cessation of Israeli-Palestinian security coordination and the release of all political detainees.

Most people in Xinjiang camps have ‘returned to society’

The Indian elite and the erosion of democracy