A senior Pakistani judge accused of convicting the jailed former Prime Minister Nawaz Sharif in a corruption case “under pressure” has been removed from his office, the country’s law ministry said. 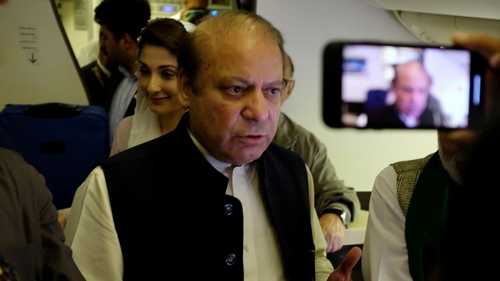 This came days after Maryam Nawaz, Sharif’s daughter and opposition leader, claimed the judge – in a secretly videotaped conversation – admitted he convicted Sharif of corruption after being coerced.

She said Malik also admitted there was no evidence against Sharif, a claim the judge denies.

The allegations were made during a press conference where she aired a video that purported to show the judge admitting to legal fallacies in the case against her father and saying he was “blackmailed” into delivering the verdict.

“Judge Arshad Malik was asked to stop working on the basis of the alleged video and the press release,” Naseem told a news conference on Friday.

The Islamabad High Court (IHC) in a statement, said, the law ministry would decide if an inquiry against the judge would be conducted by the ministry itself or by the IHC.

Malik’s removal on Friday prompted immediate calls by Sharif’s PML-N party for the release of the 69-year-old former prime minister, who is currently serving a seven-year jail sentence in the Kot Lakhpat jail in the eastern city of Lahore.

“The decision against Nawaz Sharif should be dismissed and he should be released immediately,” party spokeswoman Marriyum Aurangzeb said, adding that Sharif’s conviction should be considered “void”.

Sharif was convicted and jailed last year after failing to prove the source of income that had led to his ownership of a steel mill in Saudi Arabia. Under Pakistani law, this is taken to prove corruption.

In her press conference, Nawaz claimed the judge had told Nasir Butt, a PML-N party worker, that he was being blackmailed by unspecified people who had videos of him engaging in acts of a personal nature.

Malik admitted to knowing Butt in a personal capacity, but denied any such blackmail had taken place.

He called the video “a lie and fake” and accused the Sharif family of threatening and offering him bribe in exchange for acquitting the former prime minister.

Malik can be seen briefly in the footage, but for most of its duration his face is not visible while a voice, purportedly his, can be heard detailing legal issues with the case against Sharif.

Following his removal, Pakistanis weighed in on Twitter, using the hashtag #FreeNawazSharif.

“Free Nawaz Sharif, the true people’s representative, the three times elected Prime Minister who has been conspired against and wronged, not once but over and over again. Time to rectify the wrong & redeem justice,” Maryam Nawaz wrote on Twitter.