Air attacks by Saudi-led coalition forces have killed at least 10 civilians, including children, in a busy market in northern Yemen’s Saada province, a medical source and Houthi-run media reported. 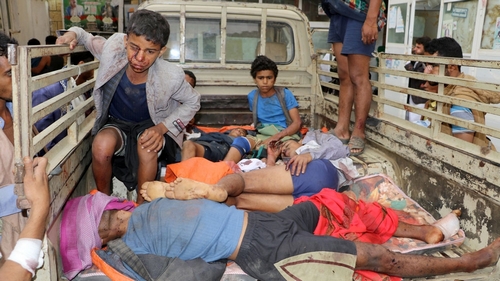 The manager of the local Al Jomhouri hospital on Monday said 13 people were killed and 23 others injured in the air raids in Qatabir district by Saudi-led troops battling Iran-aligned Houthi rebels.

Pictures taken by a Reuters photographer showed at least nine bodies, some of them torn apart, lined up on a nylon sheet near the morgue.

The spokesperson for the coalition did not immediately respond to a request for comment and there was no confirmation from the alliance or Saudi authorities.

The Saudi-led coalition has been battling the Houthi rebels on behalf of an internationally recognised government since 2015 in a war that has killed tens of thousands of people, thrust millions to the brink of famine, and spawned the world’s most devastating humanitarian crisis.

The Houthi rebels, on their part, have stepped up missile and drone attacks on Saudi cities, and the coalition has responded with air strikes on their targets, mostly around Sanaa city.

In August 2018, coalition air raids killed dozens of people, including children travelling on a bus through a market in Saada.

The alliance initially said it had targeted missile launchers but later admitted the attack was unjustified.

Human rights groups have criticised Western countries that provide arms and intelligence to the coalition over air attacks that have killed civilians at hospitals, schools and markets.

The coalition says it does not intentionally target civilians.

The Houthis, who say their movement is against corruption, control Sanaa and most of the main urban centres. The government of Abd-Rabbu Mansour Hadi holds the southern port of Aden.

The violence could complicate efforts to implement a UN-sponsored troop withdrawal agreement in the main port city of Hodeidah that is meant to pave the way for peace talks to end the conflict, which is largely seen in the region as a proxy war between Saudi Arabia and Iran.

Turkey: S-400 purchase ‘not a preference but a necessity’

Why do states allow impunity for torture?