A 3,000-year-old quartzite head of Egyptian “boy king” Tutankhamun has been auctioned off for almost six million dollars in the UK despite a fierce outcry from Egypt that claimed the piece was likely to have been removed from the country illegally.

Egyptian officials believe the head of famed pharaoh Tutankhamun was stolen some time in the 1970s File: Peter Nicholls/Reuters

Christie’s auction house sold the 28.5cm relic for 4.7 million pounds ($5.97m) on Thursday at one of its most controversial auctions in years. No information about the buyer was disclosed.

Tutankhamun is thought to have become a pharaoh at the age of nine and to have died about 10 years later. The depiction of the famous pharaoh’s finely chiselled face shows the king taking the form of the ancient Egyptian god Amen.

Slightly damaged at the ears and nose, the sculpture came from the private Resandro Collection of Egyptian art.

Egyptian officials had wanted Thursday’s auction halted and the treasure returned to Egypt.

They had asked the UK Foreign and Commonwealth Office as well as the United Nations cultural body UNESCO to intervene, saying the piece was likely to have been removed from Egypt illegally.

About a dozen protesters waved Egyptian flags and held up signs reading “stop trading in smuggled antiquities” and “Egyptian history is not for sale” outside the British auction house’s London salesroom.

“This should not be kept at home. It should be in a museum,” Egyptian national Magda Sakr told the AFP news agency. “It is history. It is one of our most famous kings.”

Describing the Tutankhamun piece as “rare” and “beautiful”, Christie’s acknowledged the controversy surrounding its sale in a statement on Thursday following the sale.

“We recognise that historic objects can raise complex discussions about the past, yet our role today is to work to continue to provide a transparent, legitimate marketplace upholding the highest standards for the transfer of objects.”

Before the auction, Mostafa Waziri, secretary-general of Egypt’s Supreme Council of Antiquities, said he was disappointed that the sale was going ahead despite requests for information and protests from government officials and Egypt’s embassy in London.

“I believe that it was taken out of Egypt illegally… They (Christie’s) have not presented any documents to prove otherwise,” he told Reuters News Agency, saying Egypt would continue to press the buyer and others for the work to be returned. It was not clear if the buyer’s identity is known to Egyptian officials.

Former antiquities minister and television personality Zahi Hawass told AFP that the piece is thought to have been “stolen” in the 1970s from the Karnak Temple complex north of Luxor at a time when other artefacts were stolen. 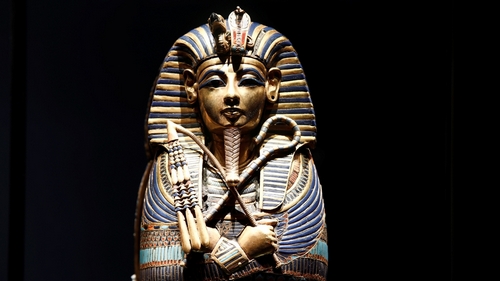 Tutankhamun is one of the most well-known figures of ancient Egypt File: Benoit Tessier/Reuters

Christie’s said it had taken the necessary steps to prove the piece’s provenance and that the sale was legitimate.

The auction house added that it had been in touch with Egyptian authorities in Cairo and the London embassy and that Egypt had never before expressed the same level of concern about an item whose existence has been “well known and exhibited publicly” for many years.

Christie’s has published a chronology of how the relic changed hands between European art deals over the past 50 years. Its oldest attribution places it in the collection of Prince Wilhelm of Thurn und Taxis in modern-day Germany in 1973, however, this was disputed by a report from Live Science news site last month, which suggested he had never owned the piece.
In January, Egypt recovered part of a tablet bearing hieroglyphs from a London auction house.