Nigeria’s National Assembly was on lockdown on Tuesday after shots were fired outside during clashes between police and a group of Shia Muslim protesters. 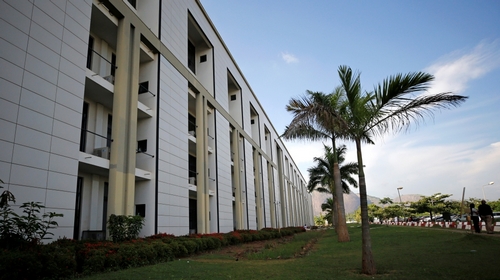 Security would not let anyone into the parliament building during Tuesday’s violence File: Reuters

Police used tear gas on the protesters and smoke could be seen coming from the area.

The Islamic Movement of Nigeria (IMN), a group that represents Nigeria’s minority Shia Muslims, tried to enter the complex, sparking the confrontation with police.

IMN members protest regularly outside the National Assembly, calling for the release of their leader, Ibrahim Zakzaky, who has been in detention since 2015.

According to Bafar, a 24-year-old student who was at the protest, trouble began when the group insisted on gaining access to the National Assembly premises to present their grievances to federal lawmakers.

“But they refused us and started spraying tear gas and shooting live bullets sporadically. I saw more than three people collapsing,” he said.

A spokesman for Nigerian police did not immediately respond to requests for comment.

One analyst said some of the demonstrators may have returned gunfire against security forces.

“I’m told that today for the first time in four years they shot back”, said Tunde Ajileye, consulting partner at SBM Intelligence, a Lagos-based political and economic risk advisory firm.

“If so, we’ve essentially crossed a horrible milestone. The government has worked itself into a corner where it will now see force as the only response to this and create a vicious cycle.”

For more than three decades, the Shia-Muslim group has had regular run-ins with security forces in Nigeria while demonstrating against perceived religious persecution.