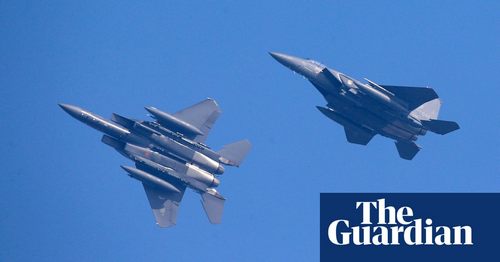 Chinese military aircraft also entered South Korean airspace on Tuesday, first on their own and then with Russian planes, officials said.

Officials said South Korean F-15k and F-16k jets were scrambled to intercept the plane and fired flares after sending a message to the aircraft.

It was the first time a Russian military plane violated South Korean airspace, according to South Korean officials.

The encounter with the Russian plane occurred near the easternmost islets of Dokdo, disputed islands controlled by South Korea but claimed by Japan, the military said.

Earlier in the day, two other Russian planes and two Chinese aircraft had entered the Korean air defence zone.

At around 6:44am local time two Chinese warplanes flew above the East sea and stayed for about 30 minutes, the South Korean news agency Yonhap reported.

The Chinese aircraft later joined two Russian bombers and flew southward together over the East sea. The four encroached upon the defence zone at around 8:40am for a 25-minute flight, an officer from the Korean joint chiefs of staff told Yonhap.

It was not known whether the two countries entered the air space deliberately.

Pakistan plane crashes, killing more than a dozen in Rawalpindi

Syrian gov’t, opposition agree to a ceasefire in Idlib